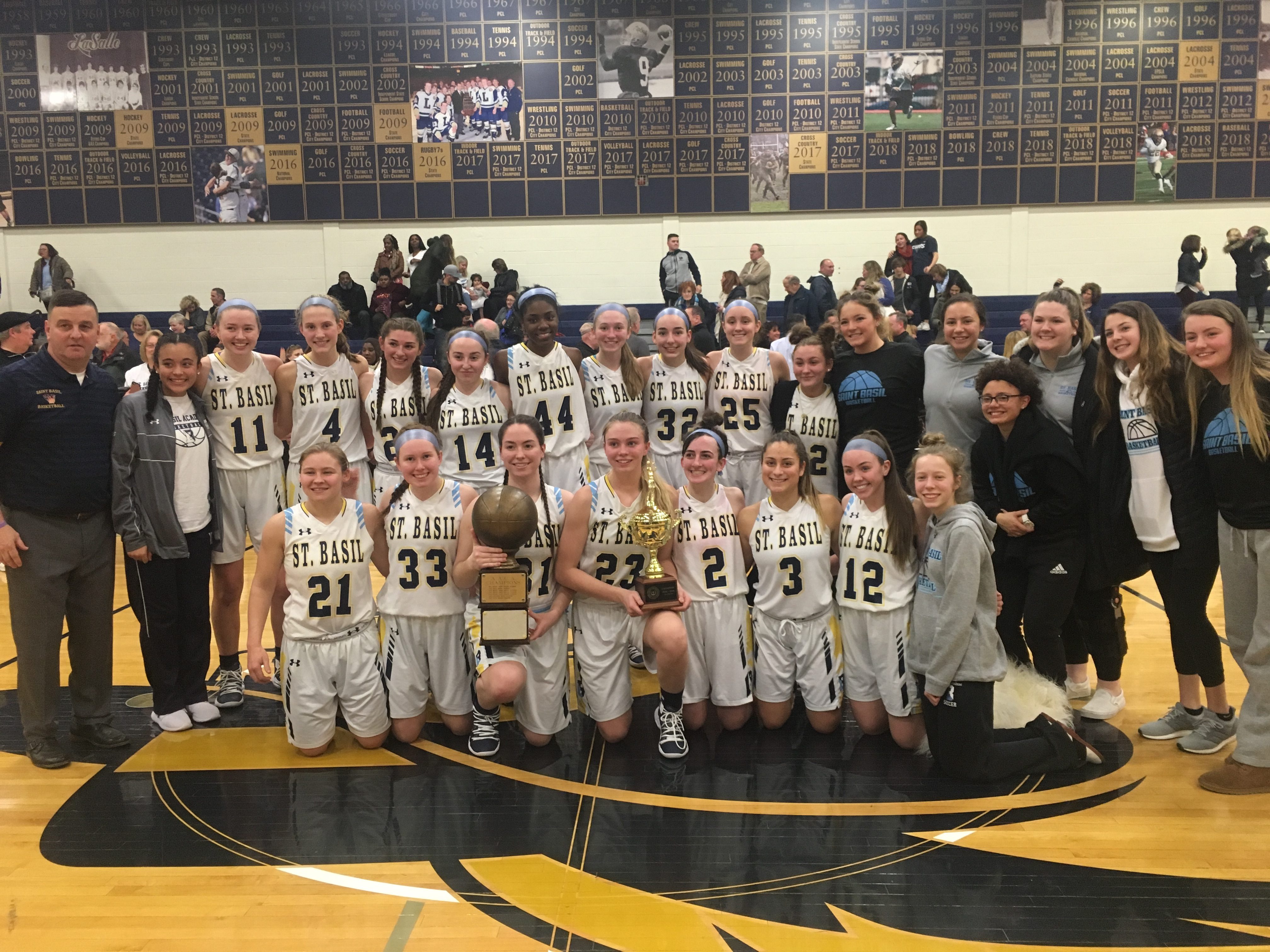 The St. Basil girls basketball team poses with the AACA trophies after the Panthers' 43-37 win over Villa Maria in the AACA final on Wednesday, Feb. 13. (Andrew Robinson/MediaNews Group)

SPRINGFIELD >> At halftime, Casey Remolde and her St. Basil Academy teammates had a profound sense of déjà vu.

There they were, in a classroom in a back hallway at La Salle College High School, locked in another defensive slugfest with Villa Maria Academy. For the third time this season, the Panthers and Hurricanes were pulling out all their tricks to try and stop each other and for the third straight season, their final meeting of the season would determine the AACA champion.

An early third quarter spurt gave St. Basil enough of a cushion to fend off a furious Villa Maria comeback in the fourth as the Panthers emerged with their third straight AACA title in a 43-37 clash Wednesday night.

“It’s probably one of the best feelings I’ve ever felt in basketball,” Remolde, who led St. Basil with 11 points, said. “I knew it was going to be a tough game, we had two tough games against them earlier in the season and I feel like out of all three games, I wanted this one the most.

St. Basil (24-0) had swept the regular season series, winning 48-46 on Dec. 15 and 53-43 in a game closer than the final score on Jan. 19. The Hurricanes (20-4) had hoped that fact would give them a little bit of an edge, given the difficulty in beating the same team three times in a season and with the pressure on St. Basil to repeat.

The top two teams in the league looked like they’d seen enough of each other in the first half. Villa Maria opened 2-of-9 from the floor while the Panthers shot 2-of-15 in the first quarter, with St. Basil clinging to a 6-5 lead after one quarter.

Things didn’t get much better for the Hurricanes in the second quarter and despite a bushel of good looks, Villa Maria just couldn’t get anything to fall.

“We got down early, our offense was really bad in the beginning and that cost us the game,” Villa Maria coach Kathy McCartney said. “It was low-scoring, I think there were some jitters, some nervousness.

“We couldn’t hit anything. I thought we got some really good shots from the people we wanted to have them and they didn’t go tonight. That’s high school basketball, you run your stuff and don’t make the shot, there’s nothing you can do about it.”

Over the final 3:52 of the first half, St. Basil outscored Villa Maria 10-4 sparked by two buckets from Remolde and a pair of Lizzie Deal offensive rebounds, the latter coming with 0.5 left on the clock and sending the Panthers to the break leading 17-10.

“That first half, I’m sure a lot of people here weren’t too entertained but that’s the type of game it is when you get two teams like this,” St. Basil coach Terry Mancini said.

All season, the St. Basil coaches have preached winning the first three minutes of the third quarter. The Panthers have excelled at that, and they understood a quick start out of halftime would be crucial to changing the tide of the game.

With three long and superbly athletic players on the back end of their 2-3 zone, the Hurricanes had done a nice job in the first half of keeping St. Basil from getting scores off its cuts and quick passes. In the first 2:10 of the third, the Panthers ripped off an 11-2 run and hit a trio of 3-pointers to break the zone.

“The main thing we said at halftime was to stay out of foul trouble, which I didn’t really do, but we also had to come out strong in the first three minutes,” Remolde said. “It felt like a repeat of the last two years, our coach even said it was like the movie ‘Groundhog Day,’ which was kind of funny but that’s really what it felt like.”

In the second meeting, St. Basil played almost exclusively zone defense in the second half which Remolde noted was due to foul trouble and the Panthers’ smaller court. Watching the semifinals on Saturday, Mancini watched Mount Saint Joseph hang with Villa Maria using a zone and it gave him an idea for Wednesday.

A man-to-man defense by trade, the Panthers mixed things up between man and zone throughout the game and it helped them negate the Hurricanes’ height advantage inside. Remolde and Denae Carter combined for six blocks and Carter had 13 rebounds as the Panthers cleaned the defensive glass very well.

“I don’t think they were expecting in and out of it and helped us defend better throughout the game,” Remolde said. “Last time, we wanted to compress them a little more because our court is smaller but since it worked so well, we decided to bring it back into this game and I think it definitely worked to our advantage.”

The Panthers led 32-22 after the third quarter and pushed their lead to 38-26 when Kelly Grant hit a pair of free throws with 3:15 left in the fourth. After Remolde missed the front end of a one-and-one with 2:16 left, the Hurricanes started to storm back.

Abby Walheim scored on a strong take to the basket, then after Maddy Ryan blocked Carter, Julia Samer rebounded the ball, went the length of the court and hit a 3-pointer thanks to a helpful bounce off the rim. Samer, who scored all nine of her points in the final quarter, had cut the lead to six with 1:35 to go.

“We got desperate,” McCartney said. “We started to play with some reckless abandon and we should have done that earlier in the game. We double-teamed and came up with the ball a lot, it just fell a little short.”

GIRLS BASKETBALL: @stbasilbball Denae Carter gets all the way to the rim and draws a foul on a Q4 score against Villa Maria pic.twitter.com/h2MIUK7KrA

Grant hit 3-of-4 at the line before Samer splashed her third 3-pointer of the quarter, came up with a steal and found Walheim who got fouled. Walheim, who paced the Hurricanes with 11 points, hit both at the line to make it a 41-37 game with 24 seconds left.

Remolde made up for her earlier miss by icing the game with two at the line and after Carter secured the final rebound, the Panthers were able to celebrate their three-peat at center court.

“I give these girls a lot of credit, it starts with Casey, she’s our captain and our leader and everyone stepped up behind her in a game of this magnitude,” Mancini said. “We always say the first three minutes of the third quarter, our girls came out on fire and that’s just them knowing the situation and doing what they had to do.

“We made it a little interesting, but you know a good team like Villa isn’t going to just go away.”

The All-AACA teams were announced following the game.