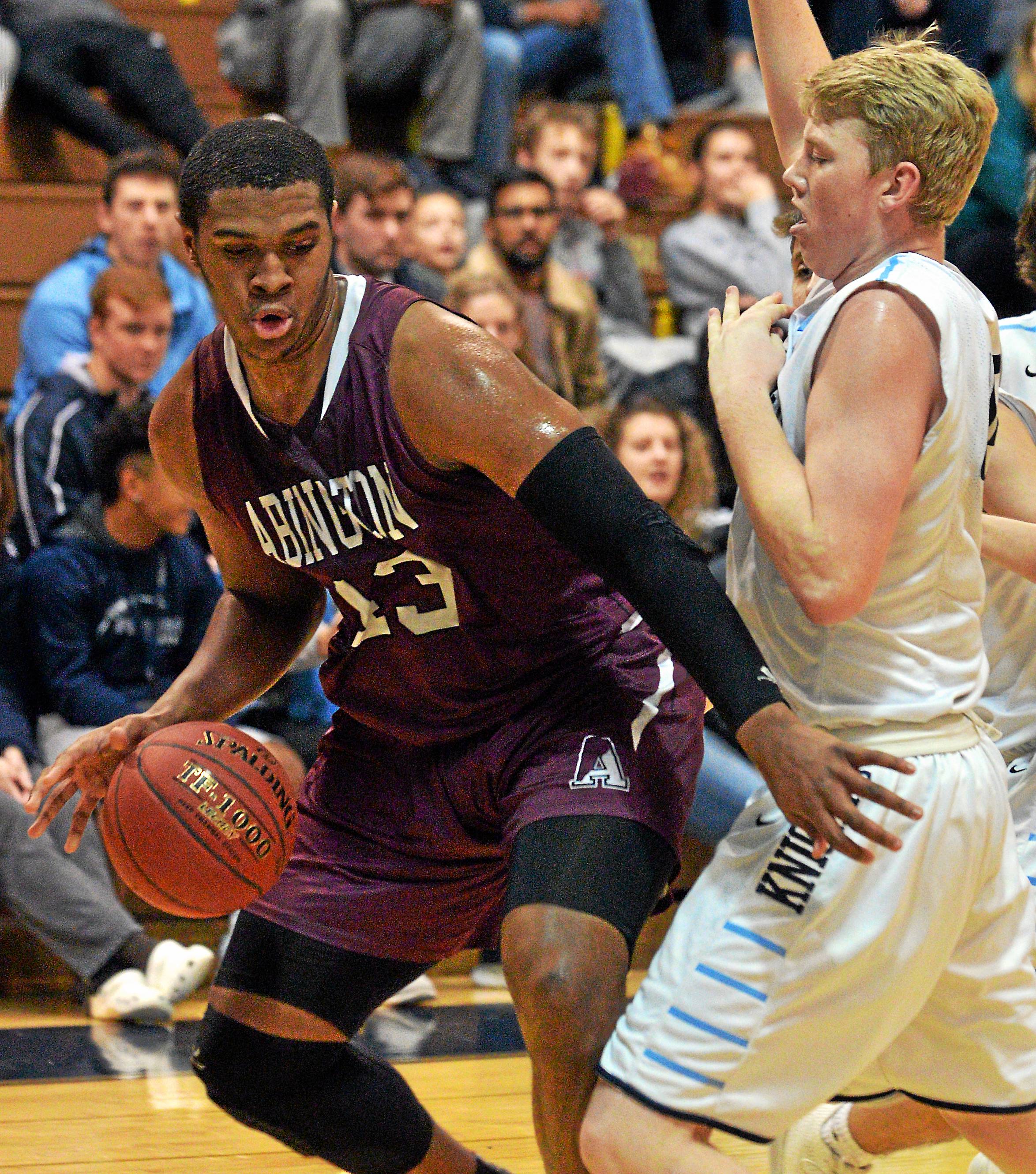 ABINGTON >> He’s far from finished, but Eric Dixon has already scored more points than anyone else in the history of Abington basketball.

It was only a matter of time until Dixon, the Galloping Ghosts’ 6-foot-7 senior forward, broke the mark but he certainly did it in impressive fashion. The Villanova recruit was simply dominant over the weekend as Abington took part in the loaded Gonzaga DC Classic, capturing tournament MVP honors as the Ghosts finished second.

Playing his first home game of the season Tuesday, Dixon reflected on his new standing atop the Abington record books.

“It’s a cool feeling, they put it out on Twitter and everyone started messaging me congratulating me and telling me ‘we’re happy for you,’ and it was another reminder of why I’m so happy to stay home and play here,” Dixon said. “I have my community supporting me, even in a loss, they were telling me how much they care about me and how much they appreciate my efforts. I appreciate them coming out and supporting me, I love and appreciate the support and I wouldn’t be able to do it without them.”

Abington improved to 3-1 on the young season, topping a scrappy Harry S Truman team 74-46 as Dixon posted 24 points, 15 rebounds and four assists to put him at 1,730 career points. For a mid-December nonconference home game, there was a good-sized crowd on hand to welcome the Ghosts home. The victory also marked career win No. 172 for Abington coach Charles Grasty, moving him into second place in program history.

A former player at Abington, Grasty now teaches at the high school and lives in the community, so he also understands the significance of Dixon’s achievement. This year especially, with Dixon and Penn recruit Lucas Monroe headlining the two-time defending District 1-6A champions, there’s a palpable buzz about the team.

“We knew he was a special player, but I wouldn’t say we knew he’d be the all-time leading scorer,” Grasty said. “There’s a lot of factors that come into play but he worked his tail off, got his body right and became one of the best players in the country. He deserves it, it’s not a gift, he earns it and he works. We’re proud of him.”

Dixon technically entered the year in third place on the school’s scoring hierarchy, behind 1975 graduate Richard Wright and Robbie Heath, who graduated last year and was teammates with Dixon the past three seasons. The future Wildcat came into the year with 1,616 career points and wasted little time putting up more.

In Washington, Dixon scored 29 points in the first two games of the eight-team tournament, then posted 32 in Sunday’s championship against Saint Frances (Md.), the game where he broke the record. Needing just seven points to tie Wright, who set the old school record of 1,681 in just three seasons, Dixon came out and scored 12 in the opening frame.

“I knew before the game but I wasn’t thinking about it,” Dixon said. “That’s not what I’m thinking about. I’m going out to win and if I’m able to score, then I’ll score. I’m also going to rebound and defend, just do whatever I can.”

A presence since his freshman year, Dixon’s still come a long way since his first time into the gym as a hopeful varsity player. The state player of the year for 6A last year, Dixon is finding it harder and harder to go anywhere in Abington without someone recognizing him or someone, mostly younger kids, wanting to share a few words.

From his beginnings in Crestmont Park to going to Abington games growing up, Dixon always saw himself in maroon and white. When he was in eighth grade, Dixon watched Matt Penecale and Amir Hinton score their 1,000th points while they and Heath led the Ghosts to a district title, filling the gym with each passing big game late in the season.

Although he had opportunities to go elsewhere and play, Dixon never saw himself anywhere else and it was big part of the reason he chose to stay relatively close and sign with Villanova.

“I used to come to games hoping to see the big moments,” Dixon said. “It’s just so special to me having grown up here. Kids come up and talk to me, on a Tuesday night to have these people come out for you, that’s not going to happen at a Montverde, an IMG or an Oak Hill and if they do, I’m not going to know the people in the crowd like I do here. I have personal connections with at least 50 percent of the crowd here, I see these people often. Most of my best friends are on the team this year, so to have an experience like that, it wasn’t something I could give up.”

This season holds a special significance to Dixon, scoring accolades aside. With more than 10 seniors on the roster, Dixon’s last run is coming with a lot of the guys he came into the program with and who he considers his best friends.

Those guys will be counted on as well, as the Ghosts have to replace not only Heath, but most of last season’s top role players and bench guys. Dixon understands that eyes are always on him and he has to be a leader for this year’s team.

It’s not something he takes lightly and the senior forward noted that in his four years with Abington, some of the guys he’s most respected were those who sacrificed for the team and filled the roles they were asked to.

“I try take after my first groups of seniors – Brian Close and Jack Steinman, Joe O’Brien, Dion Greene, BJ (James), Rob (Young) – try to show them how to work hard but still have fun,” Dixon said. “I think that’s the most important thing my seniors taught me.”

Grasty has coached plenty of talented players like Hinton, Penecale, Heath and Anthony Lee and in his eyes, Dixon shares plenty of the same qualities.

“The community is excited, I live here, I’m out and people will come up and tell me they can’t wait to come to the games this year,” Grasty said. “We want to make the community proud by working hard.”

Wright, who went on to play at Old Dominion then Oregon, may have been passed on the scoring list but as a member of the 1974 state title team, he has one thing Dixon hasn’t been able to claim yet. That’s the ultimate goal for Dixon and his teammates this season.

As for his final scoring totals, Dixon would like to keep that mark for a while bit but he hopes eventually, someone else comes along and knocks him off the perch.

“Everyone’s asking me if anyone is ever going to break it and to me, records are meant to be broken,” Dixon said. “I broke his, I’m from Abington, I want Abington to be good so if someone comes along and breaks mine, it means that’s happening.”