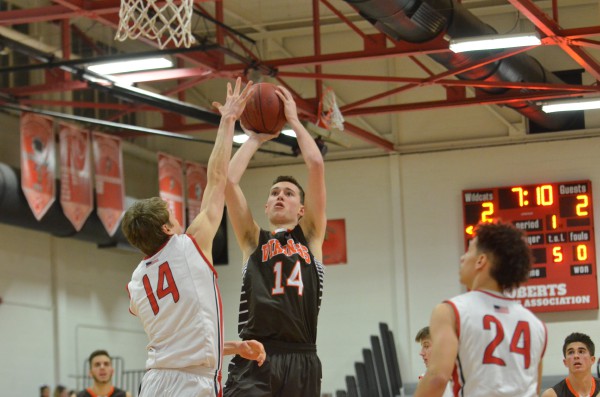 BUCKTOWN >> Michael Poysden has been around basketball a long time.

And every season, Perkiomen Valley’s head coach knows just how important the Pioneer Athletic Conference regular season opener can be for setting the tone.

“What’s always exciting about this first league game is, it doesn’t feel like the first two games you played,” said Poysden, now in his seventh year with the Vikings. “No matter who you play on tip-off weekend, divisional league play always feels different.

“The crowd’s different, the coaches know one another, the playbook shrinks. It’s a dog fight — we know that coming in.”

Tuesday night’s game proved to be a fight all the way until the finish, with Perkiomen Valley using a decisive 8-point swing in the fourth quarter on the way to a 50-47 win over Owen J. Roberts.

With the win, the Vikings (2-1 overall) won their PAC regular season opener for the first time since 2014 while handing OJR (1-2 overall) its second straight loss.

With the score tied at 45-45 with just over a minute to go, Perkiomen Valley wing Tyler Strechay picked his man’s pocket at the top of the key, then finished at the offensive end to give his team a lead it wouldn’t relinquish.

Strechay finished with 16 points while senior guard Zach Krause added 19 with four 3-pointers. The Vikings shot an impressive 13-for-16 from the free-throw line, including a 6-for-8 showing during the fourth quarter.

“This is definitely the start we were looking for,” said Strechay, now a third-year contributor with the Vikings. “Coach always says that we want to save our best basketball for February and March, so obviously we’ve still got some room to grow.”

That was the case especially early on in Tuesday night’s game, noted Poysden.

“I thought in the first half and into the third quarter we were playing way too quick,” said Poysden. “Quick and not in rhythm. We weren’t moving, cutting or screening, it was too much individual guys trying to exert individual effort. That’s not team offense.”

Owen J. Roberts took advantage of it, playing tight with Perk Valley throughout before taking a 39-34 lead into the fourth quarter before the Vikings settled back in and retook control.

Krause knocked down a pair of 3-pointers in the final frame as Perk Valley was back to moving the ball effectively and working to find the open man.

“That’s the way we want to be playing all season,” said Poysden of the fourth quarter.

OJR senior forward Sa’Vaughn Davidheiser scored a team-high 16 points while sharp-shooting senior guard Nick Massa added 11. Senior guard Marcus Martin — who sat out the first two games with a should injury suffered during football season — sparked the Wildcats with 10 points in his season debut while Ryan Sayers added eight on the game.

“They just made more plays down the stretch than we did,” said OJR head coach Kevin Kirby. “They had a couple big shots. We did a good job, we had a couple shots that we didn’t finish, a couple things that didn’t go our way. But it was a great game. We hung in there, we battled and we did a lot of good things.”

Owen J. Roberts’ Ryan Sayers (13) gets help up off the floor after converting an and-one basket during the second half of Tuesday night’s game. (Thomas Nash – Digital First Media)

Kirby was quick to point out the spark that Martin brought in his first game of the season.

“He’s been champing at the bit to get back out there,” said Kirby of Martin. “He’s our energizer, our vocal leader. He’s so coachable, such a great teammate. He just wants to be out there. It was killing him to sit there and watch on Friday and Saturday.

“He brings a lot to our team.”

Up Next >> Perkiomen Valley will host Norristown on Friday night at 7 p.m. while Owen J. Roberts will travel to face Boyertown.