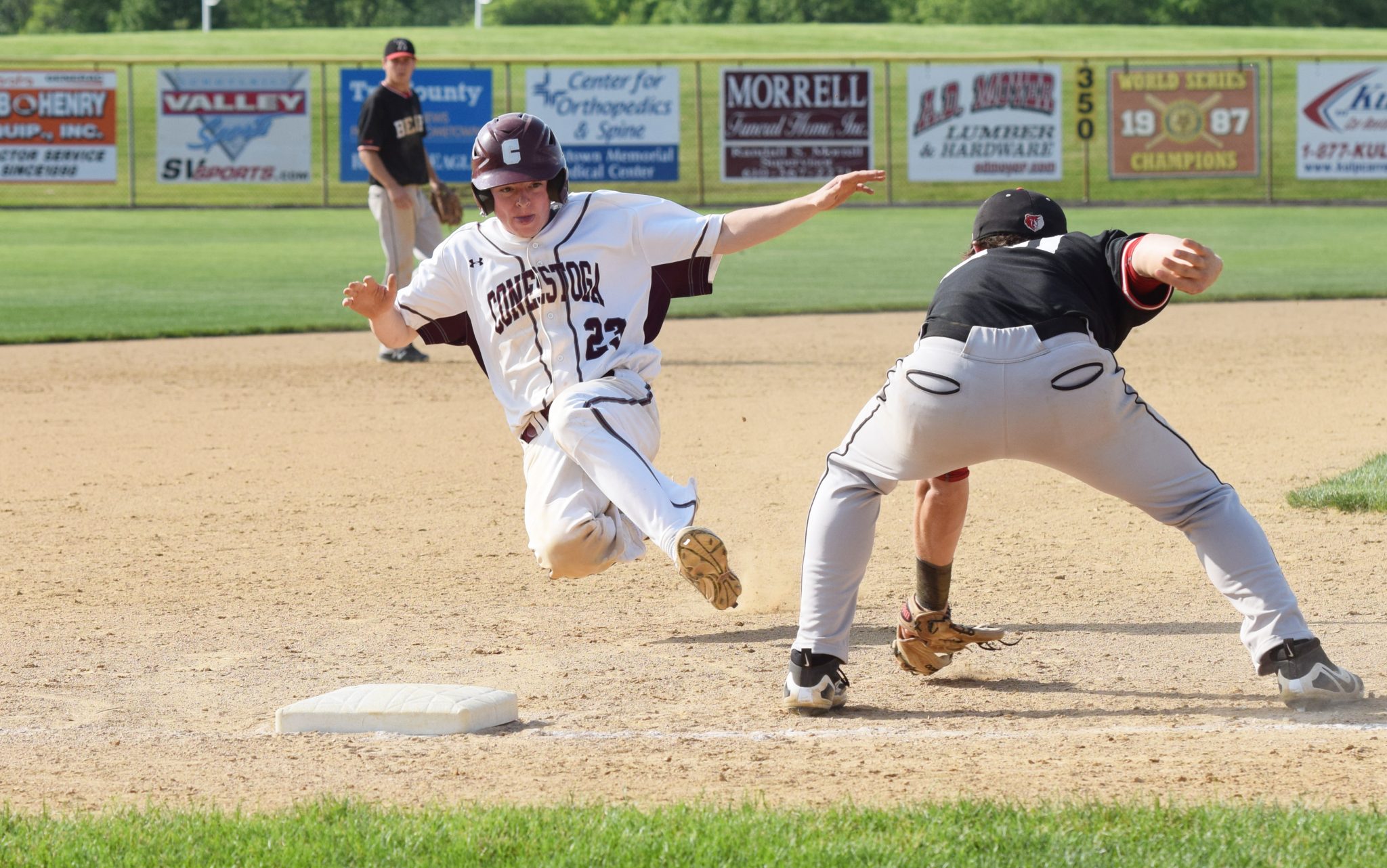 BOYERTOWN >> Few baseball moments can hold a candle to a last at-bat rally.

Few are more deflating than such a rally falling short of a comeback victory.

That was Boyertown’s fate Friday. The Bears, hosting Conestoga in a District 1-6A playoff quarterfinal, cut a four-run deficit down to one with two outs in the bottom of the seventh, put the tying run on third and the game-winner on second.

The come-from-behind victory was in position. But it fell short by the margin of a close relay throw to first base, enabling the Pioneers to pull out a 7-6 victory at Bear Stadium.

“It’s not quite the way we wanted it to end,” Conestoga manager Matt Diamond said after seeing his 16th seeds qualify for the district’s semifinal round and one of five berths Class 6A gets in the PIAA playoffs. “Give credit to Boyertown. They’re a great team, and we knew their kids would battle to the end.”

Boyertown’s Austyn Levengood dives to home plate and beats the tag of Conestoga’s Luke Czerpel to score a run during a District 1-6A quarterfinal Friday. (Austin Hertzog – Digital First Media)

The key final play saw Boyertown’s Quinn Mason drop a bunt to the left-front of home plate, with pinch-runner Hunter Ewing at third and Sam Longacre at second. Ewing sprinted down the line while Conestoga pitcher Owen Margolis fielded the ball, spun and threw to first-baseman Max Anastasio … all while Ewing was crossing home plate with — pending a safe call at first — the game-tying run.

Instead, the call at the bag was “out.” That touched off a celebration by the Pioneers, who had built a 7-1 lead three innings earlier but saw the eighth-seeded Bears work their way back into contention with help from a pair of fifth-inning runs.

“From our angle, it was an out,” Diamond said. “It was a big play. Both teams battled and played good baseball down the stretch.”

“He (Mason) got a perfect bunt down,” Moyer said. “I thought he was safe, but the umpire called it differently. I still believe we have the tying run across the plate.”

Conestoga’s Owen Margolis delivers to the plate against Boyertown during a District 1-6A quarterfinal Friday. (Austin Hertzog – Digital First Media)

The start of Boyertown’s seventh-inning at-bat came close to not producing the drama it did. With one out and Mike Hohlfeld hitting a grounder to second base, Conestoga was in position to execute a game-ending double play.

Hohlfeld ended up on second base, however, when the relay to first was overthrown. After John DiCesare was hit by a pitch, Shayn Horrocks (3-for-4) singled to right-center field to plate Hohlfeld. And the rally was under way.

“We went in knowing we might have to trade runs for outs,” Diamond said. “We understood the situation.”

Martin (2-for-4) followed with a single to left-center that brought DiCesare home from third. Then Longacre beat out a hit to third, Horrocks scoring on the play and giving Conestoga an uneasy feeling.

“We showed how we can play,” Moyer said. “We had a shaky start, but fortunately we gave them a number we couldn’t catch up to.”

Conestoga’s Luke Borger (5) is congratulated by teammates after scoring a run on a passed ball as Boyertown catcher Mike Martin, foreground right, and pitcher Gavin Henderson confer during the fourth inning of their District 1-6A quarterfinal Friday. (Austin Hertzog – Digital First Media)

The Pioneers got all their scoring done midway through the fourth, led by the bats and two-RBI efforts of Owen Margolis (2-for-3) and Ryan Buck. They plated three runs apiece in the second and fourth innings, with Max Anastasio (2-for-2) providing another multiple-hit outing.

“The kids advanced because they’re playing with a lot of confidence,” Diamond said.

Boyertown, dealt three innings of two-hit shutout ball by Conestoga starter Cameron Marcus, got on the scoreboard in the fourth with Martin doubling home Horrocks (single). In the fifth, it scored twice with help from a pair of Pioneer defensive miscues — the second, on Hohlfeld’s bouncer to short, enabling Noah Kurtz and Austyn Levengood to score.

The Bears’ pitching staff got roughed up by Conestoga early.

Kurtz, the starter, was touched for seven of the Pioneers’ eight hits and their first four runs through three innings. Gavin Henderson came on and faced only four batters before being replaced by Pat Wieand, who worked two frames, and Nolan Kline finished up.

Now, the Bears find themselves needing to win twice in playbacks to reach the state playoffs. That phase will start Tuesday when they host Souderton at Bear Stadium.

NOTES >> Marcus, throwing the first 4-1/3 innings, got the winning verdict with Margolis working the final 2-2/3. … A total of seven players from both teams were hit by pitches. … Mason had a pair of stolen bases for Boyertown, with Hunter Ewing credited for a steal.