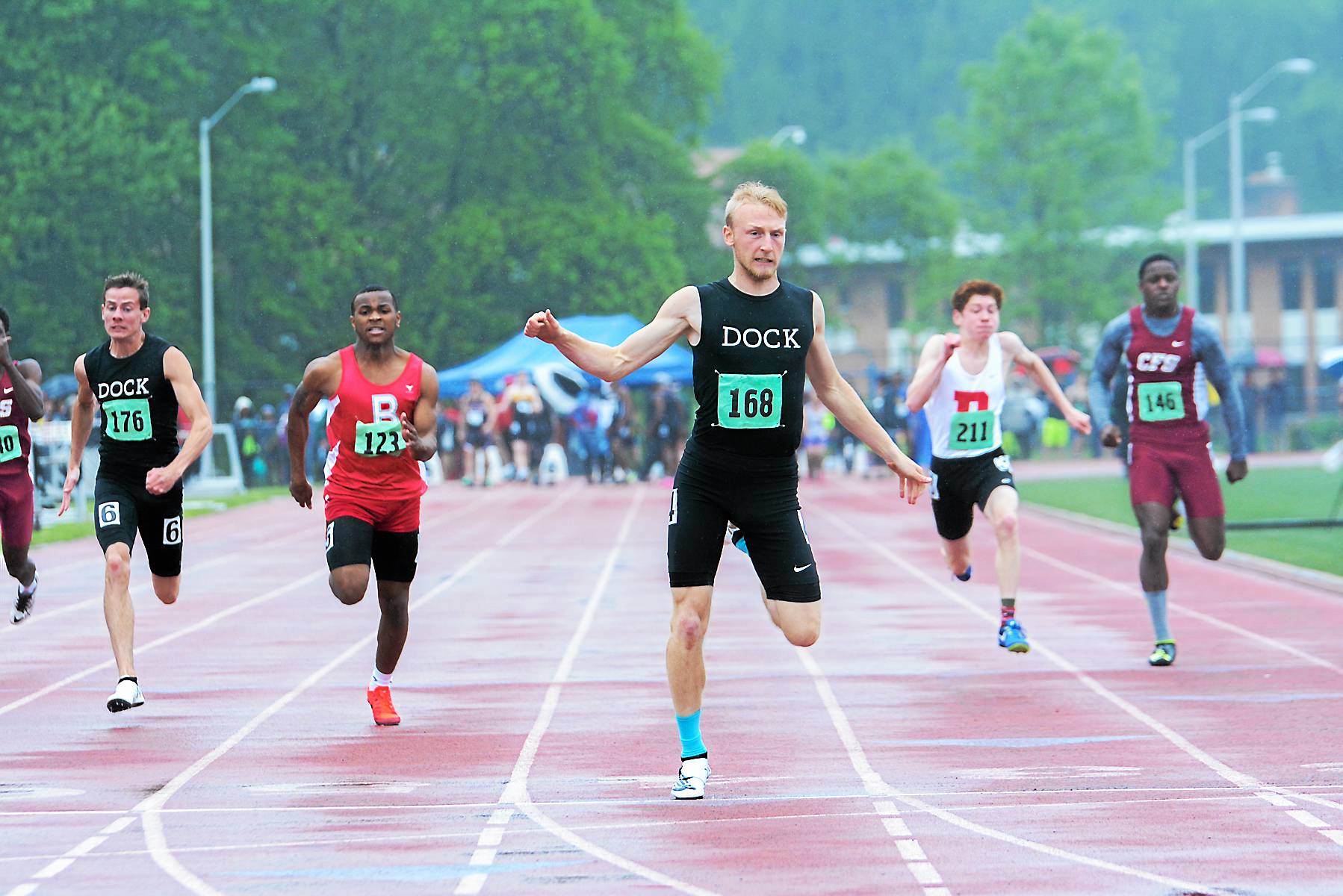 He anchored the first-place 4×100 relay and also took home the gold in the long jump.

Long before all that, the best sprinter and jumper in Dock Mennonite history did some pretty nice recruiting.

“I got Nick Smith out — he was a baseball player, and Praise Zoegar, I got him out — he was a transfer,” Kratz said. “This year, we were able to get a lot more people out. And it was really cool because in our 4×100, we have two kids that I was able to get to come out for the team, that weren’t gonna run track.

“Being able to come out and do so well, and have everyone else do so well today was amazing.”

The sight of Kratz rocketing down the Coatesville straightaways was a good metaphor for the weekend: the Pioneers pulled away from all competition, scoring an overwhelming 155 points to win the District 1-2A title. With the Pioneer girls also capturing the team title, Dock made it a clean sweep in the Class 2A competition. “At the beginning of the spring, with how well we did in winter, we set our goals on winning states,” said Kratz, who won a total of four district gold medals over the weekend. “We did everything we needed to and now we know we have a good chance next weekend.”

The Cheltenham girls captured their sixth straight district crown in Class 3A while Coatesville leads the pack on the boys side. With the pole vault event postponed to Sunday due to the weather, it is possible that either Neshaminy or Bishop Shanahan could come away with the team trophy in Class 3A.

Class 2A was a different story, as Dock dominated throughout. Church Farm was the Pioneers’ closest competition with 83 points.

Medals piled up in a hurry for Dock. And then there was Kratz.

“It’s huge redemption. For me, coming into this year, it was a big thing for me, making it to districts and making sure I didn’t false start,” Kratz said, referring to last year’s DQ in the 200. “Being able to run and break the record, it was a big weight off my shoulders.

“(Last year at districts), I dropped the baton in the 4×1 and false started in the 200. It was kind of something I had in my heart the whole time. I couldn’t believe I lost my team the title. I’m supposed to be a leader. I’m supposed to be somebody that they can depend on, and I put it on myself. So this year, being able to come out and win it, it was a big deal.” “Abbie had a phenomenal round of jumps in the triple, and McKenzie, she’s just a monster,” Eger said.

“I was really pumped about the mile,” Swartley said. “I’m glad I could help and I’m glad we won (the title).”

It all added up to quite a memorable day for Dock.

“Credit to the squad, for recruiting and getting people out,” Eger said, “but we are graduating a lot of seniors so they’re gonna be hard to replace.”

It was a crazy start to the Boys 3A 4×800 relay, especially for Central Bucks West’s Ben Bunch.

“I never have hit the ground before,” the Bucks’ leadoff man said flatly, “and now I can say I have.”

“Everyone was a little antsy on the start,” Bunch described. “There were four of us on the starting line and I was the third guy in. There was definitely some pushing at the start. Everyone had high emotions. So I just had to bounce back. And I wouldn’t want any other three guys coming after me to back me up.

“I definitely had a plan coming in,” he said. “I knew how I wanted to go out. It just goes to show you, it doesn’t always go according to plan. You need to be able to bounce back. And even though my second start wasn’t as good as I wanted it to be — I went out a little slow, I’m happy with how I bounced back.” West seemed determined to overcome anything, including the rainy weather at the start.

“When we got off the bus today, the first thing that our coach (Greg Wetzel) said was ‘there’s no such thing as bad weather, just soft people,’” Bunch said. “We’re training in the snow, training in the rain. We’re never inside, so that just goes to show you the type of coaches we have and the type of high school we come from.”

Bunch handed off with confidence to Owen Shields, who filled in quite nicely for Jake Claricurzio, who would go on to get a silver in the open 800.

“I knew I could step up to the plate,” Shields said. “During our workouts, I was able to follow their pace.”

Shields had the Bucks in contention, and then Luke Fehrman put West in front for good.

“I was glad that I had somebody in front of me,” Fehrman said, “because I do like to chase.”

The chase was soon over, and Brian Baker brought it home, assuring the Bucks finished ahead of rival Pennridge (7:57.50) and defended their 4×8 title.

“The start was really tough. It happens sometimes, it’s part of the sport. I told my guys ‘this is a test, and we gotta step up,’” Baker said. “Credit to Ben, he wiped it off, went out and raced. I was really proud of him. I told him after the race that he really showed up today, stepped up to the challenge.”