Radnor bears down to pull away from Pope John Paul 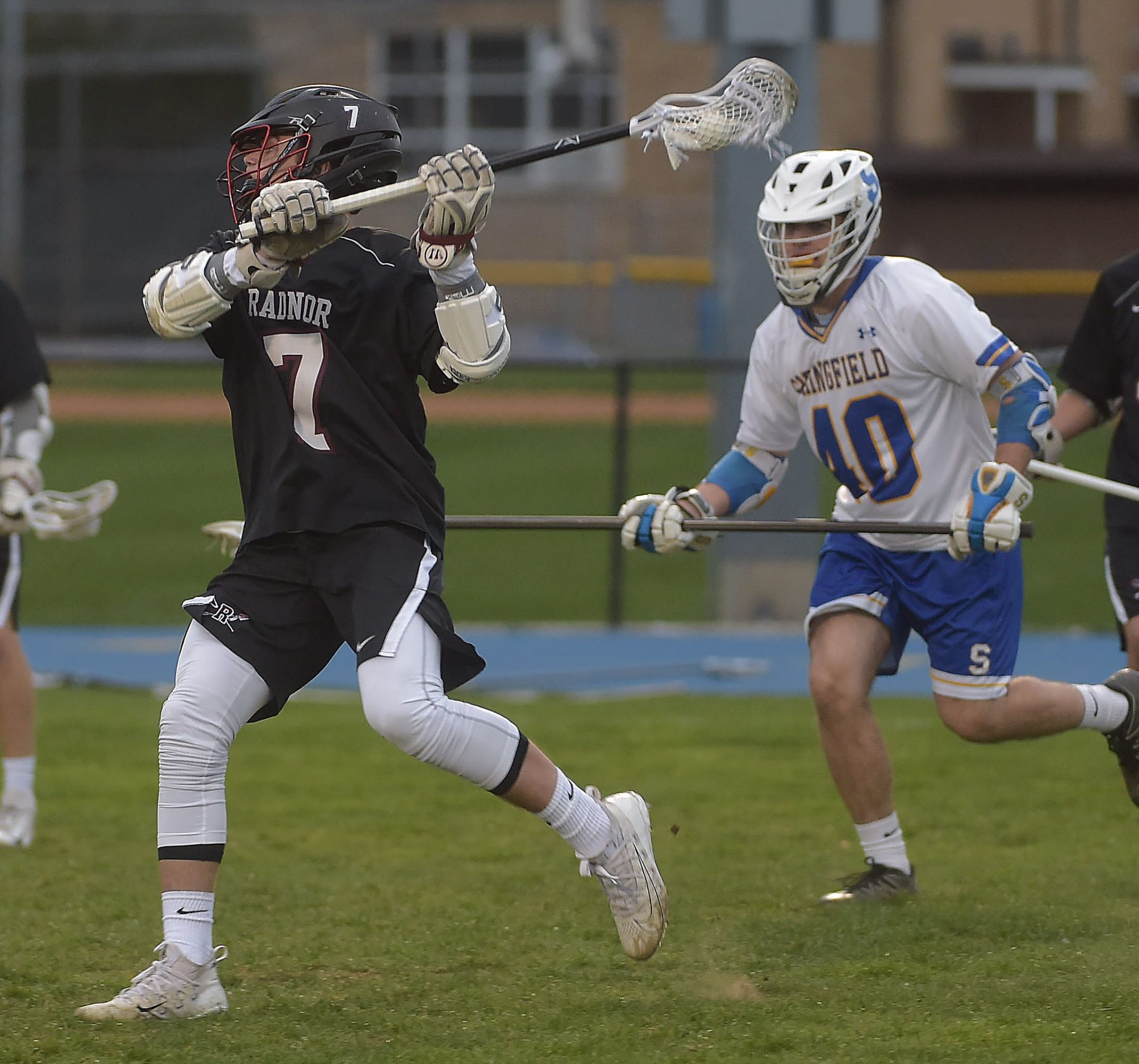 RADNOR >> With its top midfielder out of action, the Radnor boys lacrosse team has challenged itself with each passing day.

Not one player can fill the void left by Connor Pierce, a Division I-bound offensive midfield who hasn’t played since the middle of April due to stress fracture in his leg.

“Our coaches have made it an important matter,” junior attackman John Austen said. “Connor is clearly a great player and not just one person can replace him. We just have a next-man-up mentality. As the coaches have told us, it starts with everyone doing one little thing to make us all better.”

Among the players who have improved their overall games in Delaware commit Pierce’s absence are Austen, Drew Brown and Jackson Birtwistle, who buoyed the Raiders’ impressive win Thursday. Austen had five goals, Birtwistle notched a hat trick and two assists, and Brown tallied two goals and five assists as No. 3 Radnor earned a 12-3 decision over sixth-seeded Pope John Paul II in a District 1 Class 2A quarterfinal.

“We just know that everyone has a job to do,” Birtwistle said. “Losing a player like Connor … it’s not easy.”

And yet, the Raiders make things look rather simple Thursday. To illustrate the dominance, you’d have to look no further than Birtwistle’s fancy, behind-the-shoulder goal in the third quarter. Birtwistle played it coy when asked how he goes about executing such an awesome shot.

Radnor stumbled in the first quarter as Pope John Paull II frequently found itself in Raiders’ territory. A costly turnover enabled Kyle Donovan to score the Golden Panthers’ third goal late in the opening stanza. For a brief moment, the Raiders were rattled.

To say Raiders dominated the rest of the way would be an understatement.

They ramped up the attack, and their defense — led by Ryan Bernicker, Kyle Addis, Cole Schwartz and two-way middie Ryan Peter — suffocated the Golden Panthers and forced a bevy of turnovers.

“Our defenders really turned it up at the end, and our goalkeeper Archer (Darrach) did great,” Austen said. “I think it all started with our offense, though. We had a couple of early turnovers that led to transition for them. Obviously our defense, we trust very well on six-v-six possessions rather than on fast breaks. It helped them out big time.”

After the first 12 minutes of regulation, scoring chances for the visitors were sparse, if not totally nonexistent.

“I think we just figured out they were a lot of dodging up top … and they had a guy driving. We figured out how to get our sliding packages adjusted to that,” Bernicker said. “Once we huddled up after the first timeout and talked things over, we really buckled down and figured out how to slide to their dodgers. From there on, we shut them down.”

The Raiders were able to set up shop and control time of possession in the second period. Peter netted his only goal of the game on a pass from Birtwistle to even the score at 3-3. Later on, Austen gave the Raiders the lead to stay and Brown found the back of the net 12 seconds later to make it 5-3.

“In the first quarter we had a few turnovers and that’s a really big thing for us,” Birtwistle said. “We got off to a bad start and made a lot of turnovers. We had to get it back a little bit … The whole defense plays hard and they really got us going.”

“He was a huge credit for the shutdown,” Bernicker said. “Once we started getting possession more often, it just changed the game and the next thing you know we are converting on offense. You’ve got to give it to them, because they were playing really hard on the faceoff in the first quarter. I think Mike buckled down.”

Radnor continued to increase the pressure after halftime. Austen tallied three of his five goals in the third quarter as the Raiders never looked back.

The Raiders have a singular focus on their trek to a District 1 title. They hope, at some point, Pierce will be there along for the ride. Either way, they know they’re capable of doing a lot of damage.

“Connor was our best offensive middie and he was where everything was coming out of — he got us going,” Bernicker said. “ Once we figured out our offense can play with any defense, and we started playing with confidence, then it just changed our whole game.”