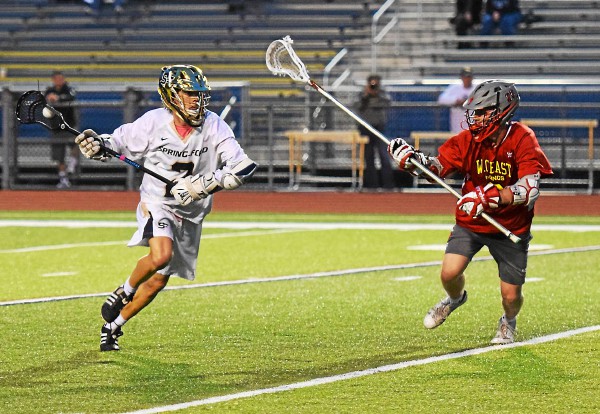 Making their first appearance in states in program history, last year’s Spring-Ford squad had the misfortune of drawing Catholic League and District 12 champion La Salle, who bounced the Rams from the tournament. This year’s seniors vowed to return to states this year for another opportunity to prove their mettle on the big stage.

After Thursday night, the Rams are just one step away from that second chance. Spring-Ford topped WC East, 12-7 in their district opener, moving into the District 1-AAA quarterfinals in the process.

Spring-Ford’s Jarrod Marenger (33) looks to get past a West Chester East defender during a District 1-3A playoff game Thursday at Spring-Ford. (Austin Hertzog – Digital First Media)

The Rams got goals from four different players—Collin Pettine, Jarrod Marenger, Peyton Gensler, and Brad Hart—in extending their lead to three goals in the third quarter. They tacked on four more fourth-quarter tallies, while the defense withstood a late East rally, leaving Spring-Ford one victory from a return to states.

It won’t come easily, however — the No. 5 seeded Rams (16-4) will travel to defending District 1 champion and No. 4 seeded Conestoga Saturday, with the victor automatically qualifying for the PIAA 3A tournament.

“When we go into these big games, in years prior, the older guys really step it up and show the younger guys the ropes — I’m looking forward to being the one to do it this year,” said Spring-Ford goalie Kyle Pettine.

Spring-Ford’s Peyton Gensler pivots the other way while being guarded by a pair of West Chester East defenders, including Sam Pfaff (27), during a District 1-3A playoff game Thursday at Spring-Ford. (Austin Hertzog – Digital First Media)

A loss won’t mean the end of the road for either side Saturday, however. The losing team will move into a playback bracket to determine the fifth and sixth berths in states (in all, six District 1 teams will qualify.)

Both teams seemed sluggish at the start, as repeated turnovers plagued both sides until senior Ryan Rosenblum broke the ice for SF at 4:29 with a laser from the top of the box. Peyton Gensler tallied two minutes later, and Kyle DeCerio made the lead 3-0 with nine seconds remaining in the quarter.

Meanwhile, the Rams made life miserable for East on the offensive end, continuing to harass the Vikings into turnovers and low-percentage shots on the net.

After starting the second quarter by killing off a two-minute man-up situation, East seized momentum for the first time with a Joe Carozza goal at 9:44. Bryant Maits followed at 5:15 to cut the Rams’ lead to one, but Jarrod Marenger took advantage of a careless East turnover to stop the run and put the Rams back ahead by a pair.

West Chester East’s Ben Delaney fights through a pair of Spring-Ford defenders for a loose ball during a District 1-3A playoff game Thursday at Spring-Ford. (Austin Hertzog – Digital First Media)

But Mike Nagel got the goal back for East with 28 seconds to play before half, sending the Vikings into the locker room down just one goal.

Carozza and Jacob Greiner had two goals for the Vikings, who ended their season 9-10 overall. WC East, the No. 21 seed in D1, reached Thursday’s game by upsetting CB South, 12-8.

“We lost eight key players to injury this year,” pointed out WC East coach Jim Schorn, “so I feel like we overachieved this year, to come out here and hang tough against a team like Spring-Ford.”

Gensler and Marenger led the Spring-Ford attack, each registering a hat trick, while Rosenblum and Hart added two tallies a piece.

“It’s a lot harder to play defense on six guys than it is to play against two guys,” said Marenger. “If we can share the wealth, get everybody involved offensively, it’ll be key going forward.”

Kyle Pettine turned away 11 East shots, turning in a stellar effort that he hopes to repeat Saturday.

“The whole defense,” Pettine emphasized, “we’ll all need to step up on Saturday.”