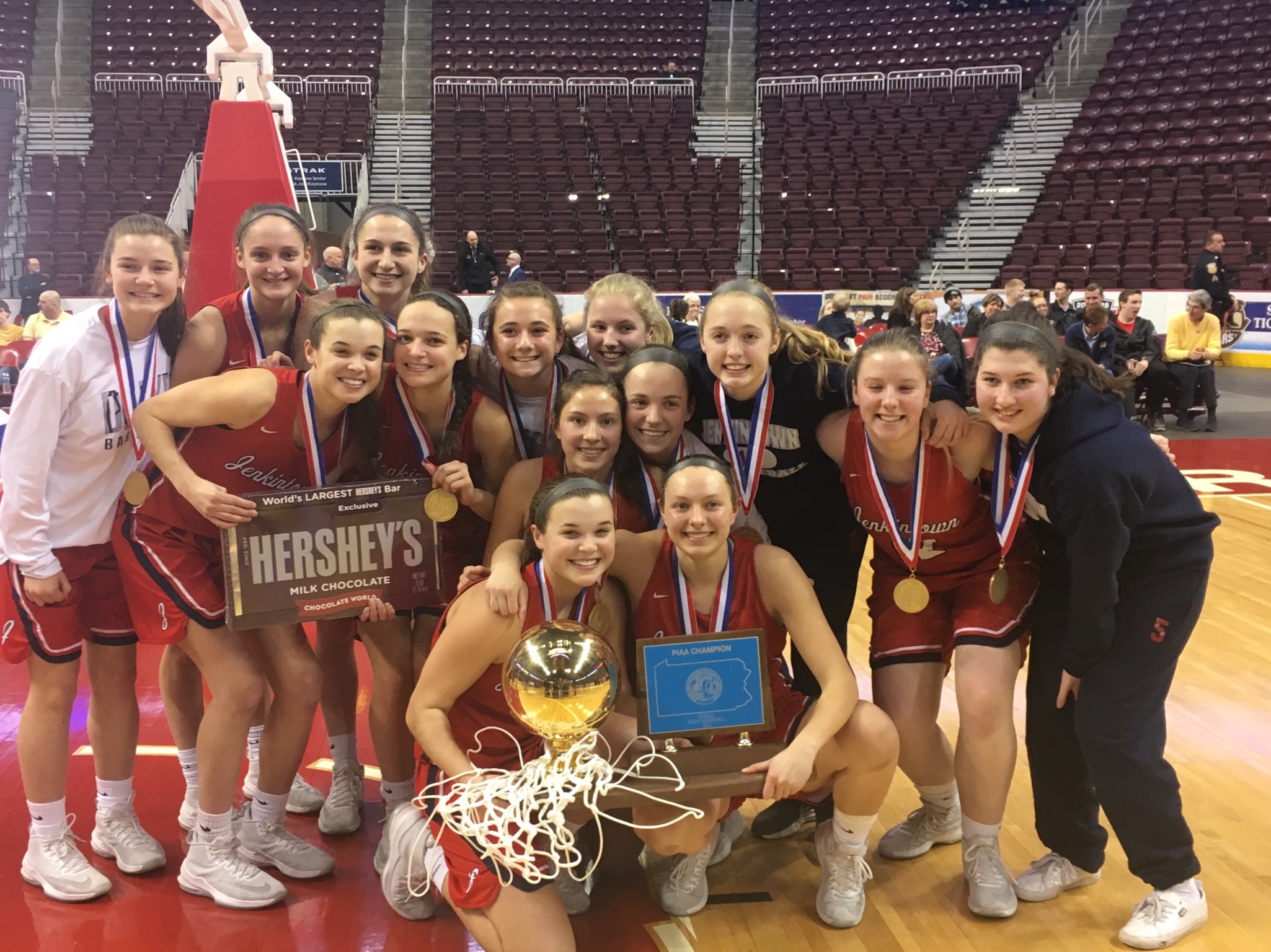 The Jenkintown girls basketball team poses with the PIAA championship trophy after defeating Juniata Valley in the Class A final at the Giant Center in Hershey on Tuesday, March 27, 2018. (Andrew Robinson/Digital First Media)

HERSHEY >> Jen Kremp was already tracking back on defense.

The Jenkintown senior kept an eye on the arc of the 3-pointer she had just taken but she knew as soon as it left her hand. It was her shot to take and she wasn’t going to miss it. The ball splashed through, capping a frantic Drakes rally late in the fourth quarter.

After hitting the clutch shot to force overtime, Kremp iced the game at the line as Jenkintown topped Juniata Valley 51-46 to win the PIAA Class A girls basketball state title, the first in school history, Tuesday at the Giant Center in Hershey.

“When we were down by nine, it started to get really real and we said this is not happening,” Kremp said. “When (coach Jim Romano) called timeout and gave us the play, he wanted a three and we needed one.

“I had to compose myself, I had to shoot with confidence and say that ball is going in. I’m just so glad it did.”

In a pitched battle between two excellent defensive teams, a slow start turned into a wild finish. Juniata Valley’s aggressive and physical defense forced the Drakes into a slog of a game on the offensive end. At halftime, Jenkintown was just 5-of-20 from the floor but the Drakes defense was keeping it in the game.

For much of the second half, it was a similar story as the Drakes struggled with their shooting. Juniata Valley on the other hand, started to find some space in Jenkintown’s tough defense and started to build a lead.

The Hornets’ swarm came to a head in the fourth quarter after senior Sydney Reed buried treys on back-to-back possessions with 3:45 left in the game. Down 36-27, the Drakes season was in the balance. The Jenkintown girls basketball team celebrates with its fans after winning the PIAA Class A championship at the Giant Center in Hershey on Tuesday, March 27, 2018. (Andrew Robinson/Digital First Media)

Jenkintown did turn to its vaunted press and it got results, fast. Junior Mia Kolb, who finished with six steals, got two layups in the row with the second cutting the lead down to 36-32 with 2:08 left. Kolb ended the game with 13 points and eight boards, but it was her gusto on defense that helped cause four straight Hornet turnovers. The Drakes had 14 steals as a team.

After senior Amelia Mulvaney hit two free throws to pull the Drakes within a point with 1:38 left, they had a chance to go up with a bit less than a minute to play. A shot by Kolb wouldn’t fall and Taylor Leidy drew a foul, hitting both at the line for a 38-35 lead with 22.3 to go.

Romano called a timeout between the free throws to try and set something up.

“When we’re on the court, all we want to do is win, there’s no joking around, we’re not smiling, we just want to win,” Kremp said. “We’re 100 percent into the game so whenever something happens, we get right back and we never stop.”

Jenkintown took off after Leidy’s second free throw went in with Mia Kolb charging forward and kicking to Kremp on the right wing.

“Jen has been that way all her time here at Jenkintown,” Romano said. “Earlier this year, we needed a big three out of her in one of the league games and she hit it after starting 0-of-6. Foul shooting, she’s just clutch for us. I can’t say enough about Jen.”

The senior pulled up, a bit off balance but it didn’t deter her shot with 13 seconds left on the clock.

“I felt, honestly, good about it. When it left my hands I was a little off-balance and started going back on defense and I kind of noticed it was going in,” Kremp said. “I had a feeling. When we first walked out on the court we went ‘wow, this place is huge,’ but our coach said it’s just another basketball court.” Juniata Valley got off a wild shot at the final buzzer that didn’t drop and the Drakes re-grouped for overtime. Romano said he told his kids that with regulation over, they had gotten everything out of their system, they knew what Juniata Valley could do and they knew what they had to do.

Natalie and Mia Kolb scored the first five points of overtime to put the Drakes up for the first time since early in the first quarter. After a three-point play by Juniata Valley, Kremp set up shop at the foul line and doled out makes for the next minute-plus.

The guard, who scored a game-high 24 points, made 7-of-8 from the stripe in the overtime. For the game, she shot 12-of-15 but even after making a clutch three, it wasn’t easy stepping up to the line.

“No, not at all,” Kremp said. “Whenever I get on the foul line, taking a deep breath is what I have to do.” Jenkintown seniors (from left) Amelia Mulvaney, Courtney Todaro, Jen Kremp and Ashley Kremp pose with the PIAA championship trophy after the Drakes defeated Juniata Valley in overtime in the Class A final at the Giant Center in Hershey on Tuesday, March 27, 2018. (Andrew Robinson/Digital First Media)

The Hornets tied the game at 46-46 on a free throw with  40.7 left, but as the second one rimmed out, Kremp skied up to grab the board and got fouled as she did. She canned both, putting Jenkintown ahead for good.

“During one of the media timeouts, I looked at Amelia and (twin sister) Ashley (Kremp) and said ‘this is not happening, we’re not losing in the last game of our careers,’” Kremp said. “It’s all we’ve wanted since we were freshman. The fact we got here and were in this situation, we had to tell ourselves it wasn’t happening and just compose ourselves.”

Tuesday’s win not only handed the Drakes their first state title, it was a crowning end three years in the making for this group. Jen and Ashley Kremp, along with Mulvaney, are four-year varsity players while Mia and Natalie Kolb are three-year starters and Caroline Arena has been a key part of the team in her three seasons.

“Hopefully now, we can put our name in the record book and be talked about in District 1, there’s so many good teams in District 1 and we just want to be a part of that,” Romano said. “It puts a stamp on it. These girls work as hard as any other group in the state.”

Romano has had some great teams and great players in his 36 seasons, but none have gone as far as this squad. A loss to Lebanon Catholic in last year’s state semifinals was the catalyst and the Drakes ran roughshod over nearly everyone, finishing with a 31-1 record that included BAL and District 1 titles plus the big trophy and candy bar they brought home on Tuesday. Kremp said when the group won the first of their three straight District 1 titles in her sophomore season, that’s when she knew they were capable of something special. The guard is still weighing her options for the future, but if Tuesday was the end of her career, it was quite the way to go out.

“We saw that we can go places and last year, losing in the final four, we knew it was so within our reach,” Kremp said. “We didn’t want this season to end, I love playing with my best friends.

“It hasn’t sunk in yet that it’s officially over. All these girls are my best friends and playing basketball with them is just an extra thing we get. It’s a little sad, but we’re celebrating right now. Doing this with my best friends is an even better feeling, this place is awesome.”