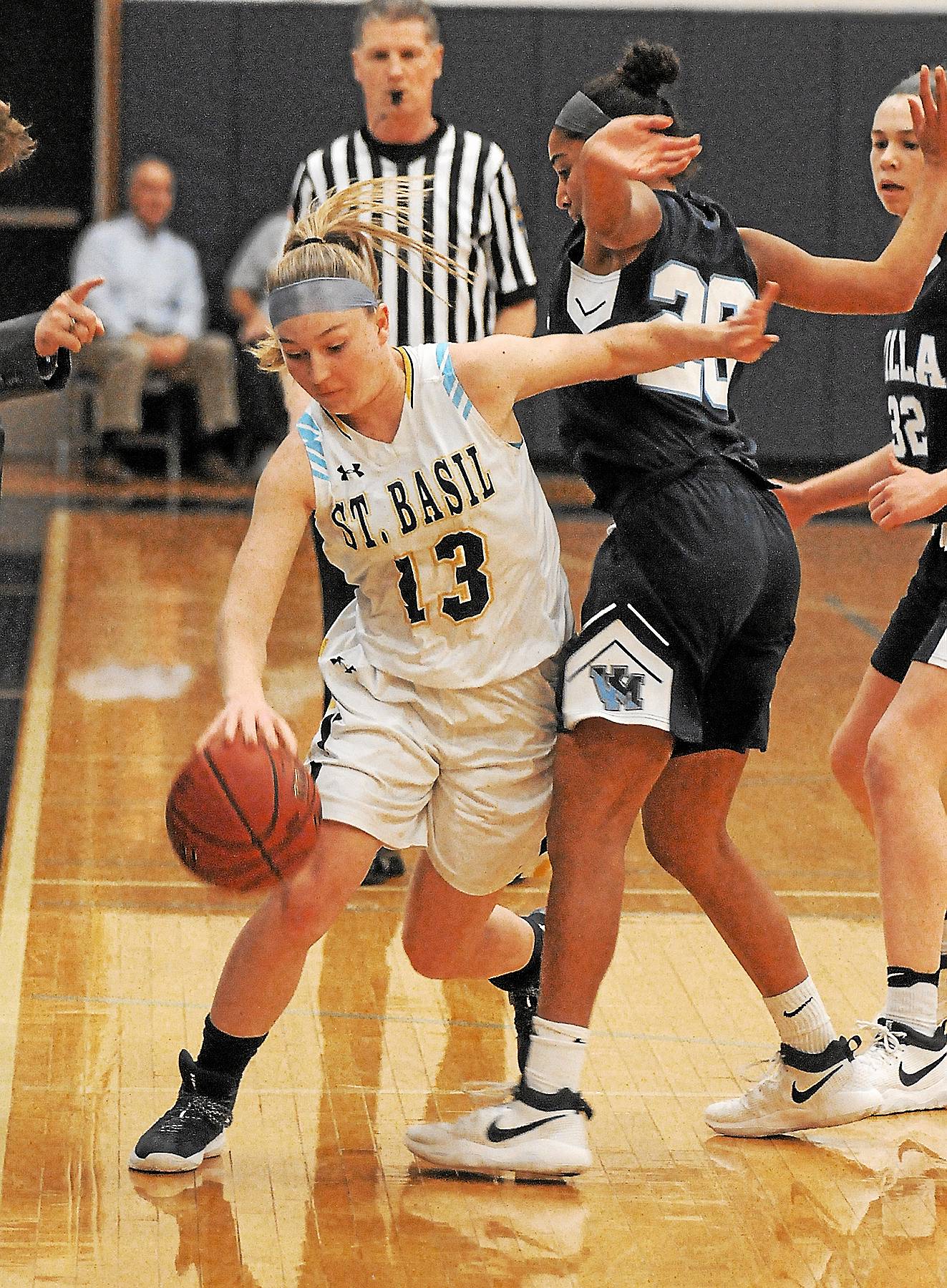 Said coach Terry Mancini: “She does everything but drive the school bus for us.”

“Second year in a row,” Remolde said happily, as Basil ran its 2018 record to 19-5. “We weren’t really playing our game in the beginning so to come back after being down for a while, being able to pull this through feels great.

“Very big (fourth quarter). It felt great to finally see us click together.”

Remolde drove to the hoop, scored and was fouled, completing a three-point play to give Basil its biggest lead to that point — 30-22 early in the fourth.

Second-seeded Villa (17-7), powered by league MVP Paige Lauder (team-high 18 pts), came all the way back to take the lead, a pair of free throws by Abby Walheim making it 31-30 with 3 minutes, 40 seconds to go.

But it would prove to be Basil’s night.

The Panthers went ahead for good when Denae Carter passed on a well-guarded outside shot, instead pulling it down and taking it hard to the hoop, her score giving Basil a 34-33 lead it would not relinquish.

Remolde hit two free throws to stretch the lead to 36-33, and after Lauder made two for the Hurricanes, Cheryl Remolde hit one of two to give Basil a 37-35 edge with 26 seconds left.

Villa had one more chance. Casey Remolde came out of a crowd with a defensive board, quickly passed it to Juliana Gura, who was fouled, and Gura hit one of two to make it 38-35 with two seconds to go.

A desperation shot by Villa fell short, and Basil fans rushed the court in celebration.

“We knew we could play like that all year,” Casey Remolde said of the Panthers, who played tough defensively throughout, and got nine points from Lizzy Deal and eight from Carter. “I’m really proud to be part of this team.

“I can’t wait to see what my team can do (in District 1-3A). We’re all so close. We’ve been playing together our whole lives and everybody brings such a good energy. Everyone plays such an important role. I couldn’t be prouder of us right now.”

Villa, which got off to a strong start Tuesday and came back to take the lead again in the fourth, will also get ready for districts (1-5A).

“We had a couple key mistakes, a couple turnovers late, and that was tough to come back from,” said Hurricanes coach Kathy McCartney. “But I just said to my kids, ‘you can’t question our effort.’ They brought it tonight.

Villa jumped out to a 5-0 lead in the opening minutes, Morgan Warley’s steal and ensuing layup part of the early burst.

The Hurricanes began to find something underneath with Lauder, who scored six first-quarter points to get Villa out to an 11-5 lead after one.

But Basil clawed back.

The Panthers tightened up their defense, with Carter jumping into the passing lane and taking it all the way in for two, as Basil drew closer.

Casey Remolde got going for the Panthers, weaving her way through traffic and to the hoop for a game-tying basket at the buzzer. Basil and Villa went into the half, tied 14 all.

“I think that was great momentum for us,” Casey Remolde said of drawing even by the half. “We had a chance to start fresh.”