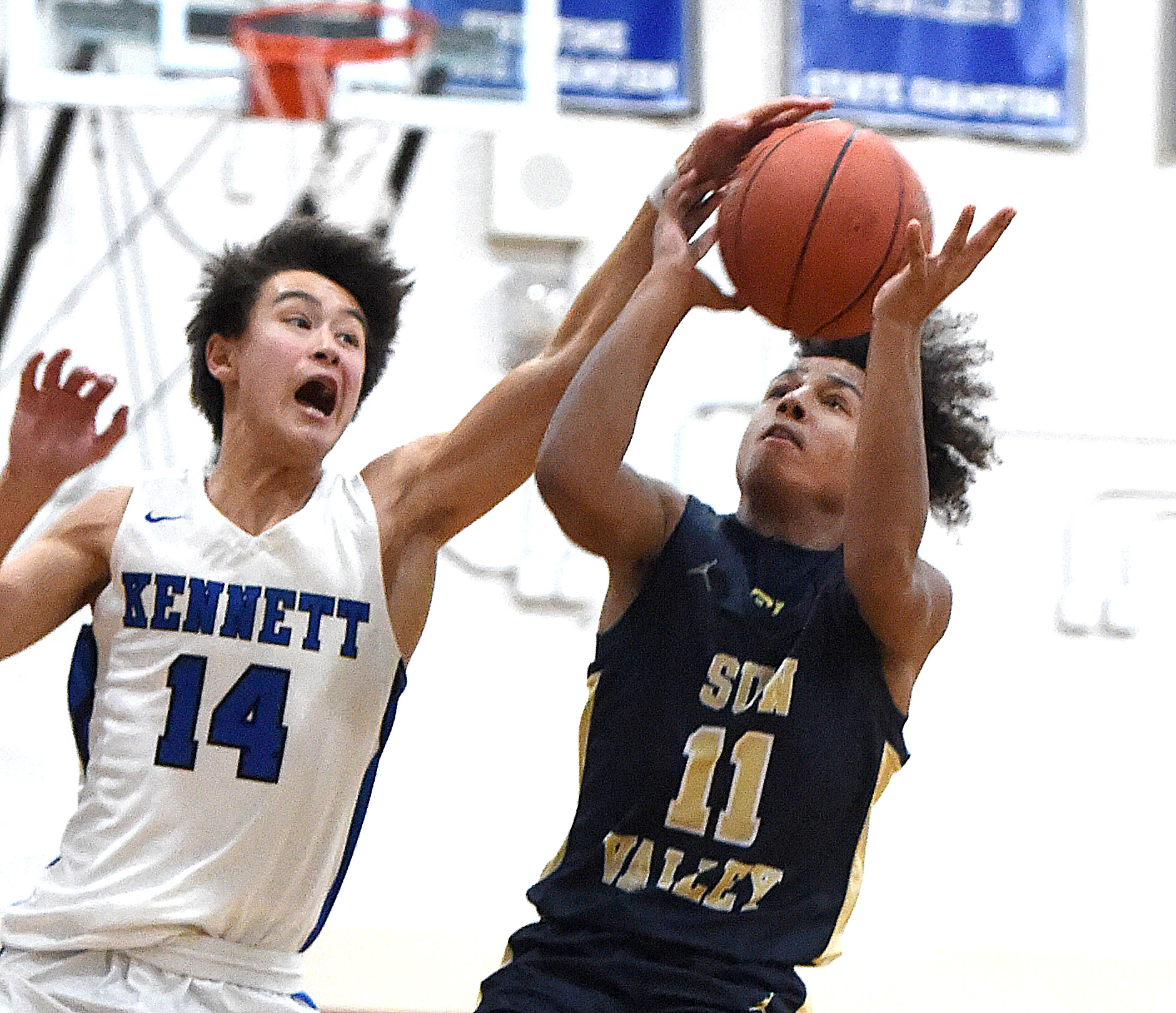 KENNETT SQUARE >> With the final seconds ticking away and the outcome becoming obvious, Sun Valley basketball coach Steve Maloney went right down the line with exaggerated and energetic hand slaps for every single player and coach on his bench.

His Vanguards had just scored 17 of the game’s final 21 points to complete a 52-45 come-from-behind victory at Kennett. It not only completed a regular season series sweep against the Blue Demons, but it puts Sun Valley (6-2, 9- 7 overall) in the mix to challenge for a top two finish in the Ches-Mont American standings and earn a berth into the league playoff.

“This puts us solidly in second place (behind unbeaten Great Valley),” he said. “One of our goals this season is to make the Ches-Mont final four. Even the year we won the district title (2019) and advanced to the elite eight in the state, we didn’t accomplish that.

“The second goal is to get some more district points. We knew a win tonight would also give us a nice little bump.”

In a clash that featured 10 ties and was tight the entire way, the finish was particularly satisfying for Maloney. The Vanguards trailed 41-35 with 5:30 to go, but then promptly reeled off 10 straight to take the lead for good.

“I liked how we finished,” said junior point guard Todd Harper. “We knocked down our free throws, we were able to get points off offensive rebounds and get some fast break points. We stuck together as a team.”

“In earlier games this season we lost some just because of free throws and turnovers. But we knew this was a big game. We had to bring the intensity and we came away with a ‘W.’”

After surrendering the first 16 points in an eight-point road loss at Sun Valley on Jan. 4th, Kennett went toe-to-toe with the Vanguards in the rematch. But the Demons fall to 3-4 (5-9 overall).

“We played hard and we tried to go at (Sun Valley’s) big guys,” Kennett head coach Jacob Gray said. “We are a smaller team. I want my guys to play aggressive, so I’m OK with some of our (18) turnovers.

“Everything our guys were asked to do heading into this game, they did it for the most part, and at a high level.”

The final surge included critical 3-pointers by Harper and teammate Chris Kwaidah, followed by some clutch free throw shooting. In the fourth quarter, the Vanguards were 11 of 14 from the line. They were just 6-13 in the first three periods.

“Earlier this season we did not finish games,” Maloney pointed out. “But we’ve been preaching in practice every day of being focused on finishing games, making free throws and limiting turnovers. It all showed up tonight.

“We just needed to keep grinding it out. We had a lot of leaders late in the game and we were able to finish the job.”

Harper went 5-for-6 down the stretch, while sophomore Noah Griffin and Kwaidah were both 3 of 4.

“Once we got down, we could only hope they missed those (free throws), but they did a good job,” Gray said. “(Sun Valley) had some good possessions at the end, they made plays, and we had empty possessions.

“Sun Valley is a good team. They got us (to play) up tempo a little bit and got into their transition offense.”

There were two first half runs – one by each side – but neither was able to pull away. The Vanguards opened the second quarter with nine straight points, but the Demons bounced back with a 12-2 run, thanks to some full-court pressure at a time when Harper was on the bench with three fouls.

A junior, Kwaidah led the way with 15 points, Harper finished with 13 and Griffin 12. Luke Good came off the bench to score 10 for Kennett, who was celebrating Senior Night.

“You have to win on the road – you can’t just win home games and make the playoffs, especially in our league,” Maloney said.

“We celebrated like crazy in the locker room,” Harper acknowledged. “It means a lot to all of us because it seems like everybody looks down on Sun Valley.”