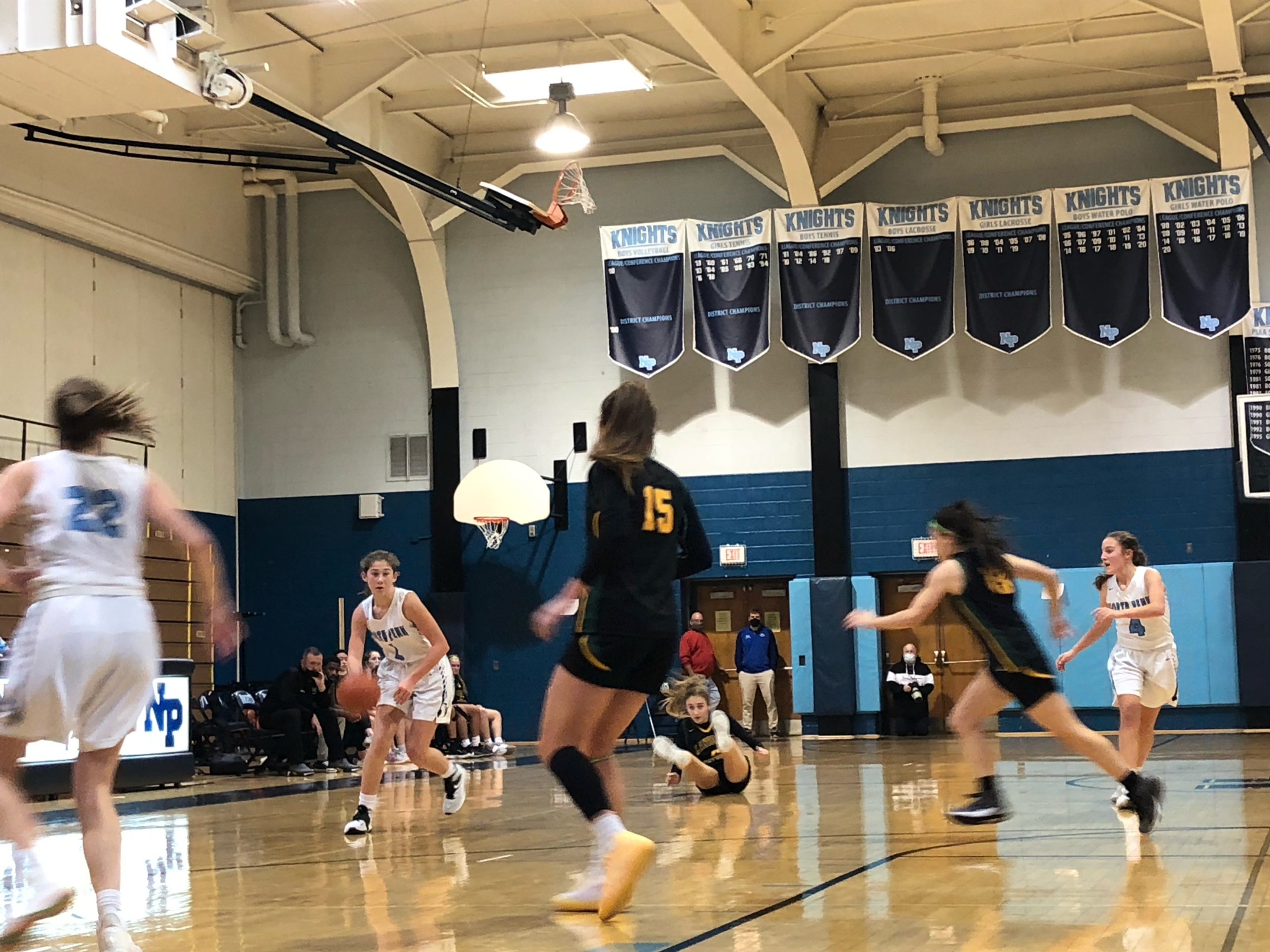 TOWAMENCIN >> The potential and the effort was never the question.

Brianna Cullen saw it almost immediately when she took over as head coach of the North Penn girls’ basketball program in mid-September. Teams the Knights scrimmaged saw it in the fall even as they adjusted to their new coach and she scrambled to get a staff together. Once the season started, opponents saw it even more as North Penn drew compliments on its play, but often after losses.

The potential and the effort were never the question. Getting the results from them was.

Saturday, the Knights picked up the first of what they hope becomes several signature wins this season with a 64-55 win over Lansdale Catholic, snapping the resurgent Crusaders’ own five-game streak in their crosstown rivalry game.

“She put 17s all over the school after a game where we gave up 17 offensive rebounds and I think that really pushed us,” North Penn sophomore Caleigh Sperling said. “I think it fired us up but it also showed how much she really cares about us. Having a coach that’s almost fresh out of college, she pumps us up for the games and really helps us at practice, sometimes she even plays with us at practice, which has been really good for us.”

GIRLS BASKETBALL: @NPHS_KnightsBB @CaleighSperling fakes then drives for the finish to start an 11-0 run Q3 against Lansdale Catholic
Sperling had the first eight points of the run pic.twitter.com/j6a17tTbYc

Cullen, a North Penn alumni and member of the program’s 2013-14 Distict 1 title team before going on to a play at Widener and Chestnut Hill College before starting her coaching career at CHC, got a late start with her hire coming after the school year had already started. With a young team and a challenging schedule, she didn’t have the luxury of time but what she found she did have was a scrappy, competitive group that could play a little if they just found the confidence to do it.

“It means a lot, it shows all our hard work is starting to pay off and we’re growing and developing as the season goes,” Cullen said. “LC is very prepared and they’re a very talented team so to be able to hang with them the first half then run away a little bit in the second half is a big statement from our team.”

The loss snapped a good run from the Crusaders (9-3), handing them their first setback since losing to Gwynedd Mercy Academy at the buzzer on Jan. 6. LC never seemed quite in sync despite a strong start from junior Gabby Casey and once she picked up her third personal foul with about three minutes left in the first half, it opened the door for the Knights.

“We knew we had a target on our back, (North Penn) executed everything perfectly and we were sloppy but they deserved that win,” Crusaders coach Eric Gidney said. “I told (Cullen) before the game she’s done a heck of a job coming in as late as she did and I knew they were going to be ready. I feel bad that we didn’t show them who we are today, but all hat’s off to them for how they played.”

GIRLS BASKETBALL: @NPHS_KnightsBB @CaleighSperling grabs a rebound, then finds @KellyDonn13 for three to cap 11-0 run for a 44-34 lead Q3 against Lansdale Catholic pic.twitter.com/C81rJGl8HO

Casey had 13 before having to sit the rest of the half but only managed six points in the second half, mostly with Sperling guarding her while also carrying the Knights (6-8) offensively in the third quarter.

North Penn closed the first half on an 8-0 run, taking the  lead on a Sperling 3-pointer and building it to a 33-29 edge at the half. LC came out with a quick five points to regain the lead after halftime before Sperling took over.

With LC trying to limit Liv Stone after she had a solid first half following Friday’s 22-point effort, Sperling seized the chance and ignited an 11-0 run that broke the game open over a four-minute span, scoring the first eight herself then assisting a three from Kelly Donnelly that gave North Penn a double-digit lead with 1:31 left in the quarter.

“I just wanted to win really bad and we had come that far, I didn’t want to let it get away,” Sperling said. “That’s happened in a couple other games and I didn’t want it to happen again.”

GIRLS BASKETBALL: @lcladycrusaders @_gabbycasey drives and ropes a pass out to @oliviaboccella for a three Q4 against North Penn pic.twitter.com/q9Vfc3Knbx

Sperling finished with a double-double, scoring a team-best 18 points with 11 rebounds and coupled with her defense, was the difference–maker Saturday. The sophomore, who also plays field hockey, has had a couple 20-point games this season but is just as adept to fill other roles if a teammate like Stone or Abby Plaugher has the hot hand on a certain night.

“Caleigh’s the type of kid that when you give her an assignment, she’ll absolutely go out and do it, Cullen said. “Casey put 13 on us the first half, so to hold her to six in the second half is a big deal, she’s a stud and Caleigh had a really tough job but she just worked and anything that was open for her, she made sure to take care of.”

The Knights’ first trip through the SOL Colonial schedule was loaded with close but ultimately frustrating losses, the kind that got the Knights plenty of plaudits but also a desire to get more than just a proverbial pat-on-the-back. Anyone that was paying attention could see NP was getting better though, as Gidney did watching previous games in preparation for Saturday.

“They just play fearless and they truly do play together,” Gidney said. “They have bought into a true team concept on both ends of the floor and it’s evident out there. I felt like today, we went in the other direction of that, we looked like we were out of sorts and disoriented, some of it was on us but at the same time, a credit to them because they put us in that position.”

Cullen is most proud of the growth in confidence she’s seen from her players. Where early in the year, some of them weren’t even looking to score, they’re now getting in the right spots to be an option and taking open shots. She doesn’t want to be the coach that yells at a player for a missed shot or turnover, she just expects the effort to make up for it.

That hasn’t been a question.

“Our effort has always been there, that’s never been my concern,” Cullen said. “We have a tough stretch of games coming up and our conference is very difficult but if we continue to give that type of effort, I have no doubt we can be a contender.”