Downingtown East’s O’Sullivan is DLN Player of the Year 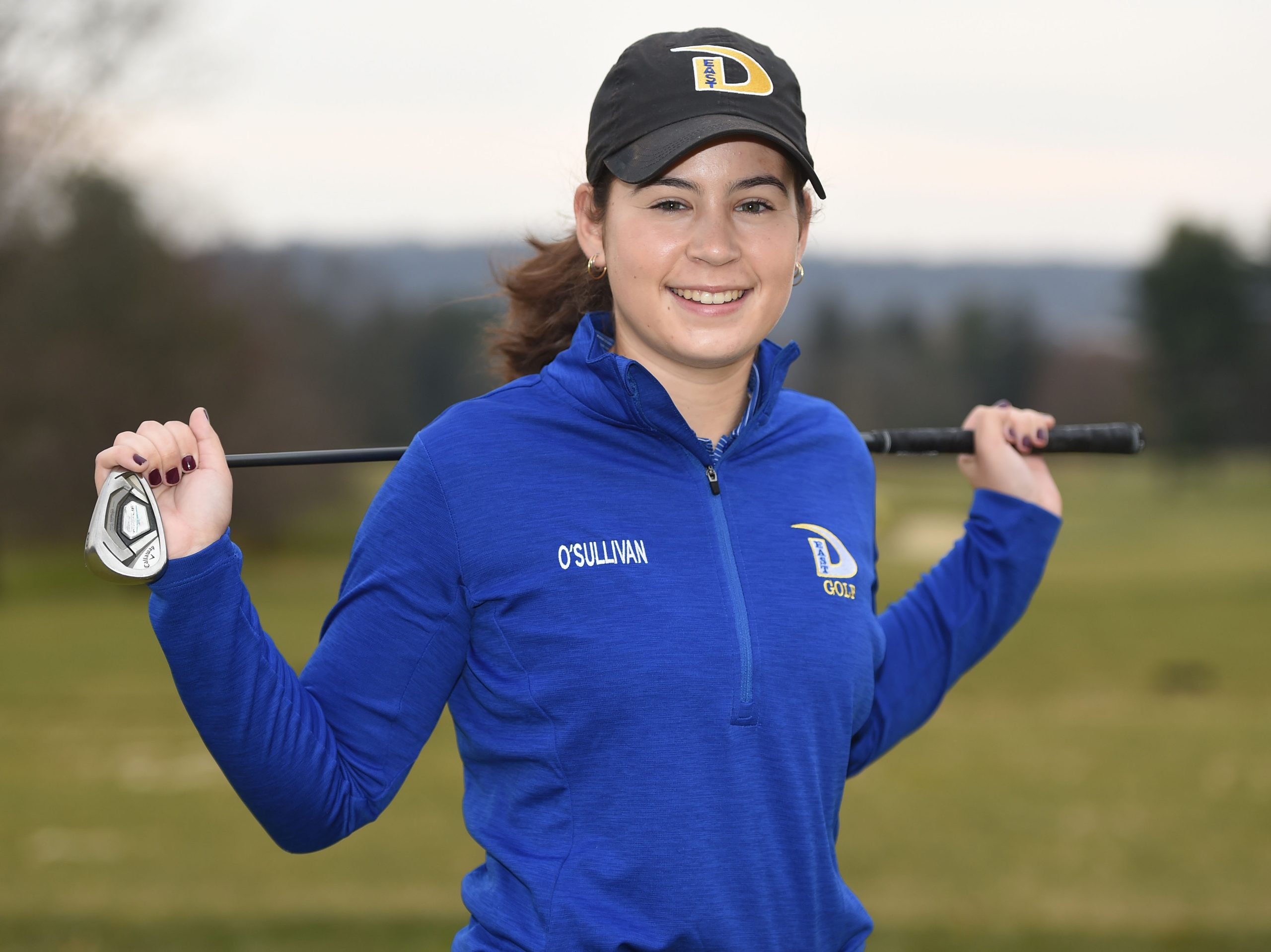 UWCHLAN >> Ava O’Sullivan’s golf game has improved by leaps and bounds over the course of the last four years. And it all culminated this fall.

The senior was the driving force for the Downingtown East girls’ squad, who completed a perfect 2021 season with a state team championship. O’Sullivan has been collecting accolades ever since, and that includes the Daily Local News Player of the Year Award.

“She is strong and powerful even though she is shorter than most of her competitors,” said her coach Matt Grinwis. “There is no weak spot in her game at this point.

“Anything that was weak, she worked on it. She is just steady all around.”

The Exton resident sported a 72.7 scoring average this fall, and then cut a full stroke off that in postseason tournaments, helping the Cougars capture the Ches-Mont and District 1 titles along the way. But getting to, and winning, the state crown was the fulfillment of a goal O’Sullivan set three years earlier, when East placed second in 2017 when she was a freshman.

“She was the key to everything we did as a team. She set winning the team state championship as a goal ever since then,” Grinwis said.

“Ever since we were second in the state, I wanted to lead Downingtown East to a state championship,” O’Sullivan echoed. “When we finally accomplished it, it was the greatest feeling in the world.”

As an individual, she successfully defended her status as league champion with a 1-under-par 71 at Applecross Country Club. And then at districts, O’Sullivan fired a season-best 5-under 66 in the opening round at Ravens Claw.

“Shooting that 66 really helped me to trust myself,” she said.

But it was a struggle on day two at Turtle Creek. She hit her drive at the eighth hole out of bounds and wound up taking a double bogey. But showing maturity, O’Sullivan quickly regrouped and played the final 10 holes without a bogey.

“Two or three years ago, that never would have happened,” Grinwis predicted.

“The double (bogey) shook me up a bit, but I knew I could still post a good score,” she added. “I just put trust in my swing and my game.”

She wound up carding a second round 73, which helped the Cougars win the team title by a dozen strokes. And her 36-hole 4-under 139 was good for a tie for second place in the individual competition.

“Early in high school, I struggled with getting over bad shots,” O’Sullivan admitted. “I’ve come from crying on the golf course to knowing that I can have a bad hole, or a bad shot, and still shoot a good score. I’ve done it and I know I can do it.”

At states, she placed fourth overall as an individual with a 76. But in the team competition, O’Sullivan was challenged again when a shaky start put her at 3-over-par through five holes.

“It was mostly just nerves,” she said. “I was putting a lot of pressure on myself. It wasn’t that I didn’t trust my team. I just settled down and played my game.”

Over the course of the final 13 holes, however, O’Sullivan was 2-under-par, finished with a 73, and led East to the state crown.

“Looking back it, it’s like ‘wow, we did all of that,’” she said. “I never thought we’d have a perfect season. It never occurred to me.

“It was huge honor to be on the team to bring home the first team state championship that our school has ever seen.”

O’Sullivan’s parents, Michael and Monica, moved the family to Exton when Ava was nine. Grinwis first met her in the summer prior to her eighth grade year.

“She had a good swing and was certainly very good,” he recalled. “As a freshman she sometimes struggled with the mental side and staying composed. She’s come a long way in that department.

“Her work ethic is pretty extraordinary. She isn’t fazed by a bad weather day, she still goes out and practices. She is focused, knows what she wants to work on and then does it.”

When the world went into lockdown in 2020 during the height of the pandemic, O’Sullivan used the time to improve her game. In the span of two years, she improved her club head speed by 10-15 miles per hour.

“During the pandemic, I started focusing more on working out and lifting weights,” she pointed out. “I generally hit the ball pretty far to begin with, but that’s really helped make my advantage over other players even bigger than it was before.

“My dad would go out with me and we would spend hours on the course trying out different shots. I wouldn’t have made the strides I’ve made in my short game and course management without him.”

She wound up being a two-season team captain for the Cougars, and has signed to play college golf at Converse University in South Carolina, where she hopes to major in bio-chemistry.

“I wanted to go somewhere where I could get my degree from a school that has a really good science program,” she explained. “Converse was the best, and it wasn’t just academics. It’s in South Carolina, so it’s obviously warmer, and I really liked the campus, the team atmosphere and the coach.”