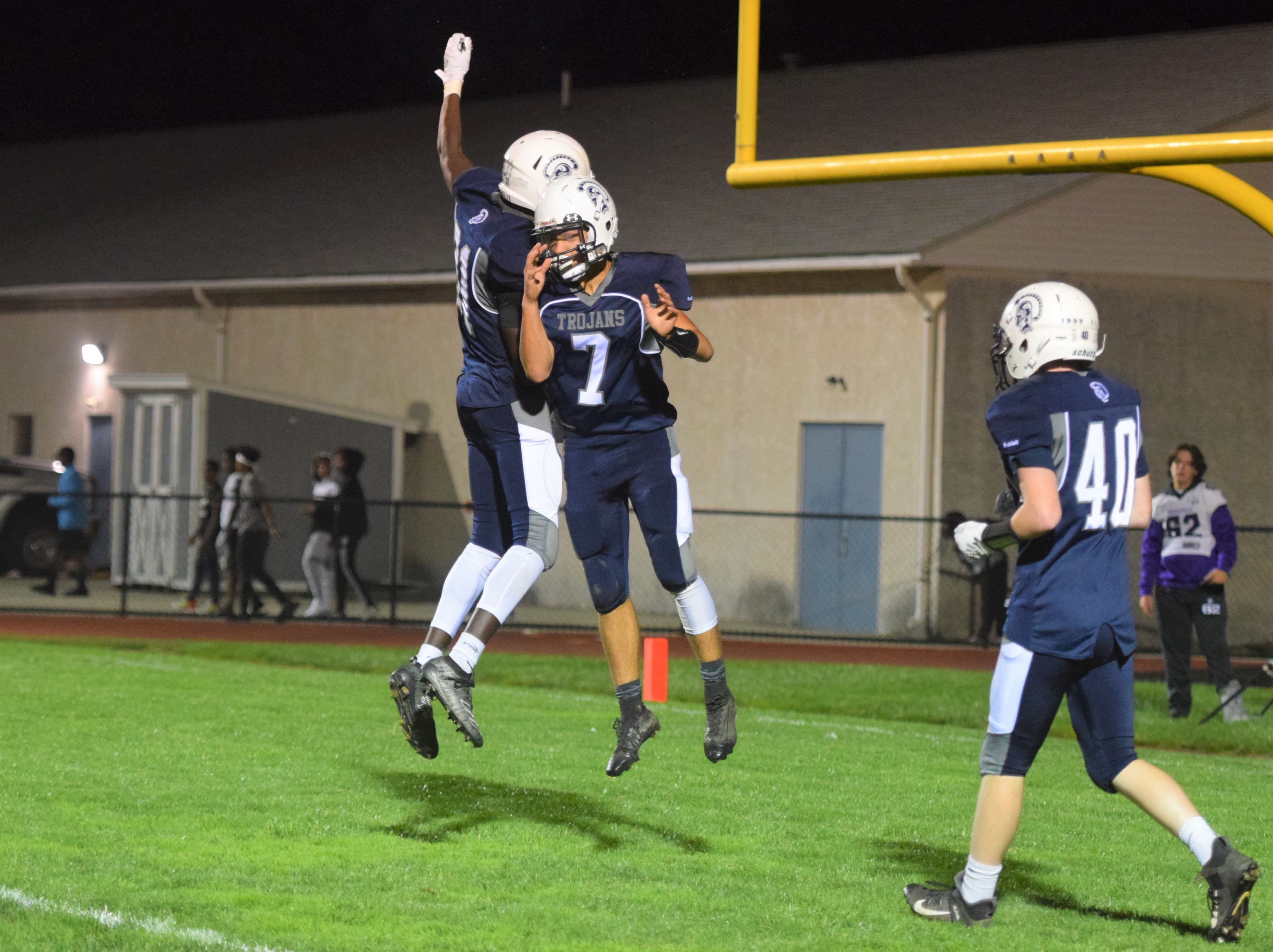 Pottstown High School student-athletes took to the streets Thursday afternoon to rally against being in the streets.

‘Let Us Play!’ read the signs of the student-athletes at the intersection of High and Hanover Street as they rallied in support of a return to extra-curricular activities.

Four hours later, they learned their signs are outdated. The new signs can read ‘We Can Play!’

The Pottstown School Board opened its scheduled Curriculum Committee meeting to public comment and allowed members of the community to voice their feelings on the need to allow extra-curricular activities.

The school board, in an unofficial vote, approved the return of co-curricular activities and athletics 7-2, setting in motion the chance to get on the playing field for Trojan student-athletes.

The vote reversed an Aug. 6 unanimous decision that suspended Pottstown sports through Jan. 1, 2021. The decision can become official at the next general meeting on Oct. 15.

Pottstown student-athletes rally at the corner of Hanover and High Streets in support of a return to athletics this fall. (Evan Brandt – MNG)

Pottstown remains in an all-online learning environment and participation in activities was extremely restricted with teams not allowed to hold group workouts or practices.

Pottstown junior Jestyn Snyder, who participates on the football and wrestling teams and attended the afternoon rally, was the first public commenter and spoke of the feeling of being left behind without football.

“As of right now we’re not in school and we’re not on the football field. I feel as if you are leaving us with nothing better to do than be in the streets,” Snyder said. “There’s nothing in the streets for us.

“One of our soon-to-be teammates was shot and killed in Philadelphia. If we were playing, he would have been in Pottstown and most likely still alive.”

Pottstown student-athletes rally at the corner of Hanover and High Streets in support of a return to athletics this fall. (Evan Brandt – MNG)

For students with difficult home lives, Snyder said, athletics and interaction with coaches and players is the highlight of their day-to-day lives.

“You never know what somebody is going through at home. I have friends that really look forward to going to school and going to football because that is the only way for them to get out of their struggles they have at home.

“Football is not just about us going out on the field. For most of us it is where we get our character and discipline to become the men we are today.”

“It is clear that not having the co-curricular activities is adding to the drop in student’s productivity,” he said. “It’s tough to continue to motivate and push our kids to do the right thing when everyone else around them is getting back to somewhat of a normal life and we’re just hand-tying.”

Michaela Johnson, Instructor of Healthcare Technology at Pottstown as well as a registered nurse and mother of 3 in the district, spoke to the improved health conditions that would allow a safe return.

“Since (Aug. 3) we have stayed under three positive tests per day (in Pottstown) … our testing capacity is much better, as well as our turnaround time, our contact tracing is much improved and we now understand this disease better and how to treat it better. Although not 100 percent perfect, we have masked up and improved hand hygiene.”

Board member Susan Lawrence maintained her original position on extra-curriculars, that the potential to contribute to any outbreak and the potential fatalities that could follow was a risk too great to take.

“It bothers me that we’re hurting children emotionally, but it would bother me even more if there was an outbreak and people died from this,” Lawrence said.

Other members, including John Armato, Pottstown’s Director of Community Relations and champion of Pottstown athletics, felt they’d seen enough change in the landscape to allow a return.

“I do believe that things have changed from when we initially made the decision to delay the start of co-curricular activities from the fall, that now is the time to revisit that,” Armato said. “I think that our coaches and student-athletes, by the very nature of athletics, are trained to be self-disciplined, follow rules, follow guidelines to reach a goal. I have confidence in them that they would be able to do that.

“Likewise, I have equal confidence that, looking at what has gone on around us, there will be an identified positive case and programs would be put on hold. If everybody is willing to accept that fact, then I for one am willing to say that I think it would be wise and in the best interest of our students to move forward with our co-curricular activities for the fall.”

Thomas Hylton shared skepticism about the ability to the fall season without any coronavirus shutdowns, but feels that ‘it’s worth a try’.

Pottstown Superintendent Stephen Rodriguez recommended the board take an unofficial vote to clarify their position of administration taking planning action.

“My mind was changed from eight weeks ago. I want to go. But I also respect the direction that you’ve been giving me,” Rodriguez said.

Following the vote, that direction means Pottstown can begin practices Monday. With the requirement of a three-week preseason, the Trojans’ first games could be Oct. 23.

At the PIAA’s meeting last Wednesday, the organization voted to allow schools to schedule games until Thanksgiving even in the event of elimination from the postseason. Pottstown will not reach the necessary number of games played to qualify for the playoffs.