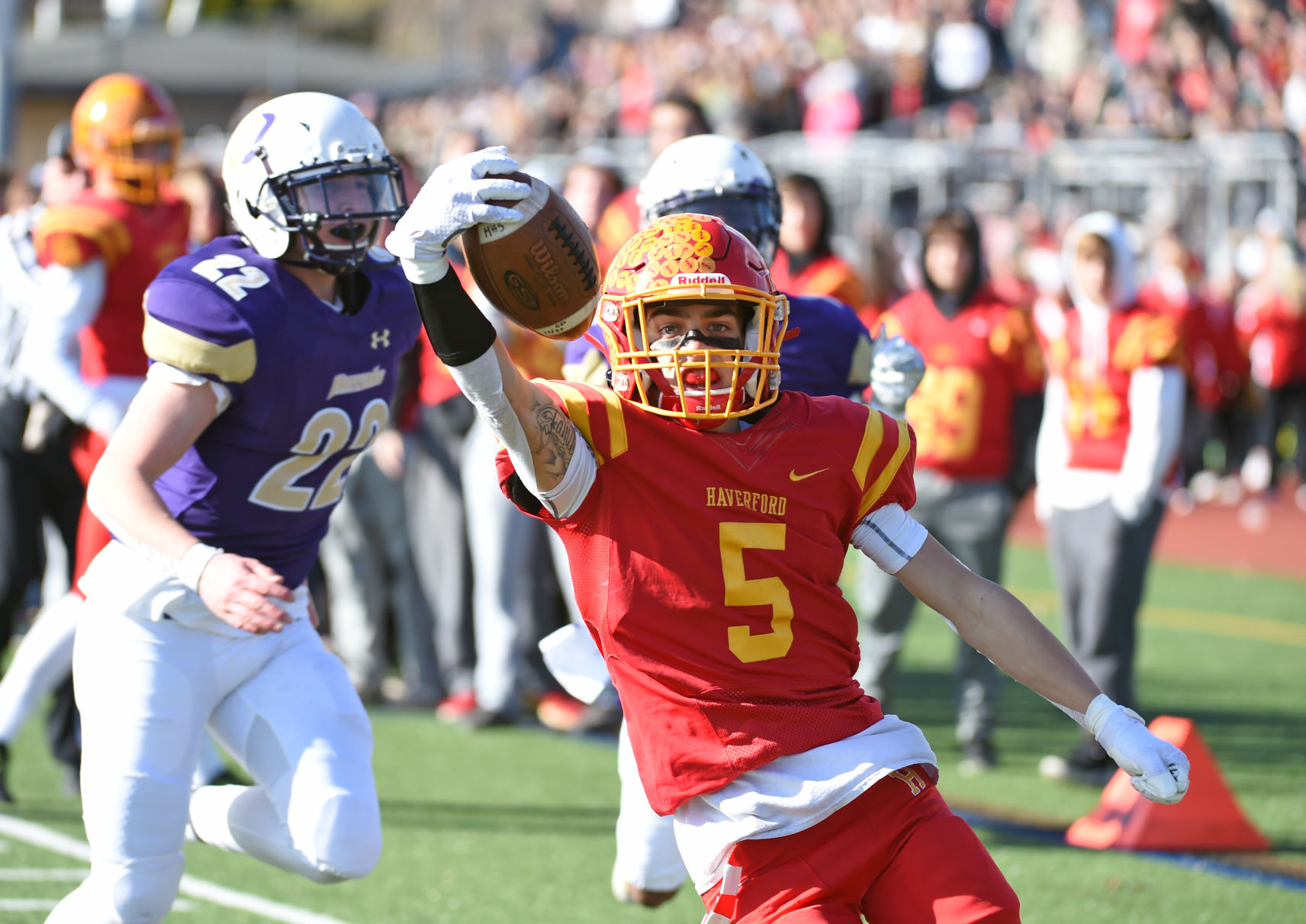 The Haverford High senior wide receiver/defensive back intercepted a pass in the third quarter and sprinted 35 yards to the end zone.

It was Burgess’ second score in the Fords’ eventual 42-18 victory Thursday afternoon. It was Haverford 10th consecutive win against Upper Darby on Thanksgiving. The Fords lead the all-time series, 49-43-6.

“That was actually my first pick-6 in my two years of playing,” Burgess said. “That was a great way to go out.”

Burgess and the Fords seniors gave longtime coach Joe Gallagher a Gatorade shower after the game. The Fords completed a history-making campaign with 11 victories, including the program’s first two wins in the District 1 playoffs. Haverford (11-3) advanced to the semifinal round of the Class 6A tournament.

“This was our biggest week of the season and we all had our energy up for this,” said Burgess, who scored the game’s first touchdown 49 seconds into the first quarter, when he caught a short pass from Trey Blair and sprinted 27 yards to pay dirt.

“We all wanted to go out as one team. If we didn’t win this game, all that preparation would have been for nothing. We wanted to … go out with a bang.”

Thursday marked Rich Gentile’s final game as head coach at Upper Darby. Last December, Upper Darby athletic director Frank Nunan announced the school district would part ways with Gentile following the 2019 season. At the time Nunan noted in an email sent to the Daily Times that Gentile does “not share the same vision of the future of the football program.”

Gentile has been at the helm of the Royals since 1994. It’s anticipated Upper Darby will announce a new head coach as early as next week.

Upper Darby head coach Rich Gentile talks to senior athlete James Tuayemie during the Royals’ loss to Haverford Thursday. It was Gentile’s last game as head coach after a long career on the Royals’ sideline. (ERIC HARTLINE – FOR MEDIANEWSGROUP)

Blair and Upper Darby’s James Tuayemie were selected game MVPs. The incredible Blair, who will play football at the University at Buffalo next fall, set the team record for career rushing yards (2,776). Most of that damage on the ground came during his senior year. He became the eighth player in Delaware County history to eclipse 2,000 yards in a season, as he finished with 2,154 yards.

In the early going Blair was greeted by a stingy Upper Darby defense, but the most electrifying talent in Delco eventually hit his stride and dominated. The all-purpose standout finished with 258 yards on 26 carries with three scoring runs. He went 3-for-8 with 49 yards and a pair of TDs through the air.

Upper Darby’S Kareem McAdams is tackled by Haverford’s Chasen Wint, left, and Will Higson during the first quarter Thursday of the annual Thanksgiving Day game at Haverford High.

“They came out different on defense than we expected and gave us a couple of different looks,” Blair said. “They had a couple of different stunts and different stuff that we hadn’t really worked on this week, but like I’ve been preaching all year, our five guys up front are outstanding. They can handle anything that’s thrown their way. They were tested a lot and I think they aced the test.”

Blair’s 48-yard jaunt to the end zone three minutes into the second quarter put Haverford ahead, 14-0. He added TD scampers of 53 and four yards in the second half.

“There is no better way to go out,” Blair said. “I’ve just been blessed with great coaches and outstanding teammates. I think this is the perfect way to end my high school career. I don’t think I’ll ever forget this team and this season. We have a bond that can’t be broken.”

Tuayemie was excellent on both sides of the ball for the Royals (5-6). He received most of the snaps out of the Wildcat formation. The senior athlete ran for 94 yards on 14 carries and scored a touchdown three different ways. His first score was a 25-yard run with 2:23 left in the second quarter to pull the Royals within eight points at 14-6.

After things were far out of reach, Tuayemie made a leaping catch in the end zone on a pass from Corey Robinson. Later in the fourth quarter he returned a punt 50 yards to the house.

But the day belonged to Burgess, Blair and the Fords, who overcame two straight loses to begin the season to win 11 of their final 12 games.

Haverford quarterback Trey Blair runs through the line against Upper Darby on a 48-yard touchdown run during the second quarter of annual Thanksgiving Day game at Haverford High. (ERIC HARTLINE – FOR MEDIANEWS GROUP)

With respect to the 2015 team that captured the Central League title on Thanksgiving Day in an epic affair with Upper Darby, this was the best Haverford team in Gallagher’s 27 years as head coach.

“Getting those two district playoff wins was a great thing, but I think losing to Garnet Valley (in Week 2) was a blessing in disguise for us,” senior lineman John Cunningham said. “It … stunk for a long time, but it made us say, ‘Hey, we’ve got to win eight straight to even think about making the playoffs.’ And we did that. We lined up and won eight straight. How many teams start off 0-2 and win two playoff games?”

These Fords can always say they did.