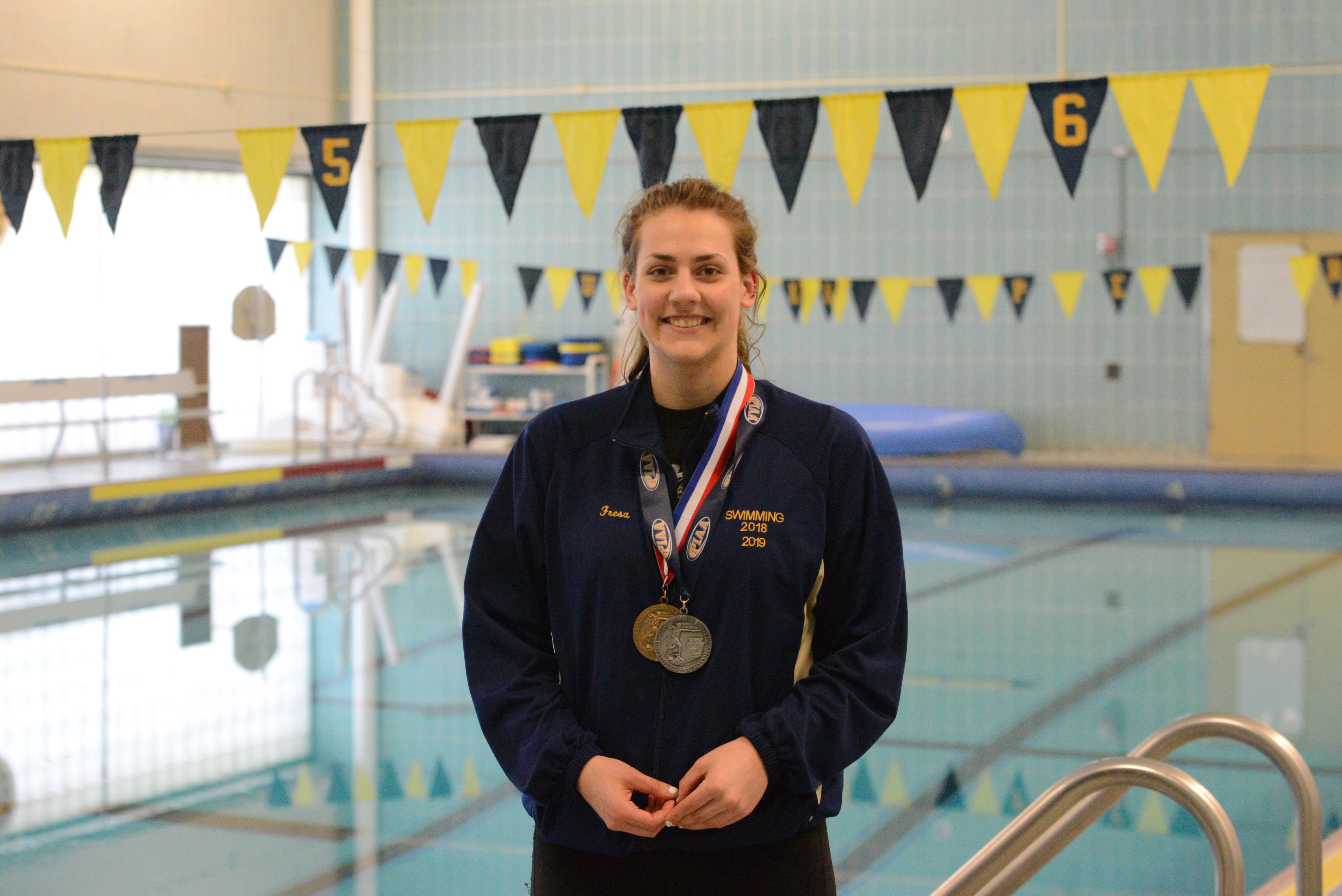 She had just completed her sophomore season, placing at states for the first time. Reflecting on her accomplishments at the swim team banquet, she decided she wanted more.

Fresa pulled out her phone and took a picture of the record board overlooking the pool. The image would serve as a reminder of the records she wanted to break during her junior season in 2018-19.

“That’s the time I need, and I’m going to get it,” Fresa told herself every time she looked at the picture throughout the past year.

Fresa did what she set out to accomplish. Her name is now next to all but four school records at Upper Perkiomen after just three seasons competing for the team.

Along with the times, Fresa also owns three District 1 Class 2A gold medals, a district silver, and two state medals. Her record-setting season earned her the 2018-19 Mercury All-Area Girls Swimmer of the Year and uncustomed attention.

“For this town, I’m good, and I know that,” Fresa said. “But it was more like for all this area now, and for the state, I’m good now. All the attention was a change.”

Fresa’s intro to swimming competitively came at age 8 when she joined the Upper Perk Gators at the local YMCA.

She was looking for something fun to do in the summer where she could be outside and get a tan. Her first practice was a bit of a rude awakening.

“It was a lot harder and a lot less fun than I thought it was going to be, but I was good so I kept doing it and eventually started liking it,” said Fresa who credits YMCA coaches Michele Heimes and Terry Krause for a lot of her development. “It’s been my life for nine years now.”

Brien Kalnoski has coached swimming for 22 years, including the last six seasons as head coach at Upper Perkiomen. He’s seen athletes compete at the district and state levels, and even at the national level when he was a club swim coach.

Fresa’s talent made her stand out as soon as she got to Upper Perkiomen.

“I’ve been in the sport long enough to look in the water and say, ‘Oh boy, there’s something special there.’ It’s just a matter of being able to train that,” Kalnoski said. “You stick her in the water and see there’s definitely something there if we continue to work at it, and she buys into the program and she trusts what we’re doing.”

Fresa wasn’t as sure of her talents before she got to high school. She said she thought she was an average swimmer.

Her freshman year disproved that notion quickly. She also went to nationals for her club swim team in 2017, a big confidence booster for the young swimmer.

“I got really good that year,” Fresa said. “I made nationals. I made states. That was a big year for me. That was when I was like, ‘I can beat a lot of these kids. I’m better than I thought I was.’”

That offseason, Fresa got in the weight room for the first time along with working out in the pool. She switched from the 100 back to the 100 free as her second event.

Fresa came back as a sophomore in 2017-18 and won the District 1 championships in the 50 free and finished third in the 100 free. She got her first two state medals, finishing sixth in the 50 and fifth in the 100.

For an encore this season, Fresa won the 100 and 200 free, a new event, at the district championships, and placed second and third in the events, respectively, at the Class 2A state championships. Her 100 time (50.96) would have placed her fifth at the Class 3A level.

“I’m not sure she realized that her freshman year, how good she could be,” Kalnoski said. “But I think she understands that now, and I think she has a good sense of, ‘This is within my grasp. I have these goals, and I think we can get there.’”

Along with her individual accolades, Fresa helped her team to unprecedented success this past season. Upper Perk finished 8-2 in the Pioneer Athletic Conference, the first time the school ever had a record better than .500.

The team beat Phoenixville in a meet for the first time and nearly took down PAC second place finisher Boyertown, falling by 10 points.

Fresa also raced in the 200 free and 400 free relays with seniors Bailey McCausland and Madison Modugno and sophomore Devin Romanowski. Along with breaking two school records, the group finished first and second, respectively, in the 200 and 400 relays at districts and made the finals in both events at states.

“It was a really big deal for us,” Fresa said of the team success. “Upper Perk has bad sports teams. It’s a thing. Actually winning something was really cool.”

Rather than the school record board, Fresa’s attention will go to the state podium. The swimmers she finished behind in the 100 and the 200 were all seniors.

She should have a good shot at being a state champion as a senior in 2019.

“Everyone that beat me at states is gone,” Fresa said. “That’s why I really want that next year.”

“You see the potential, and then you do everything to try to continue and maximize that potential each year,” Kalnoski added. “Our goal is to have her move up the medal stand, and in reality, there aren’t too many places for her to move to.”