Mercury All-Area: Daniel Boone’s Hogan makes the most of every setback in state bronze season 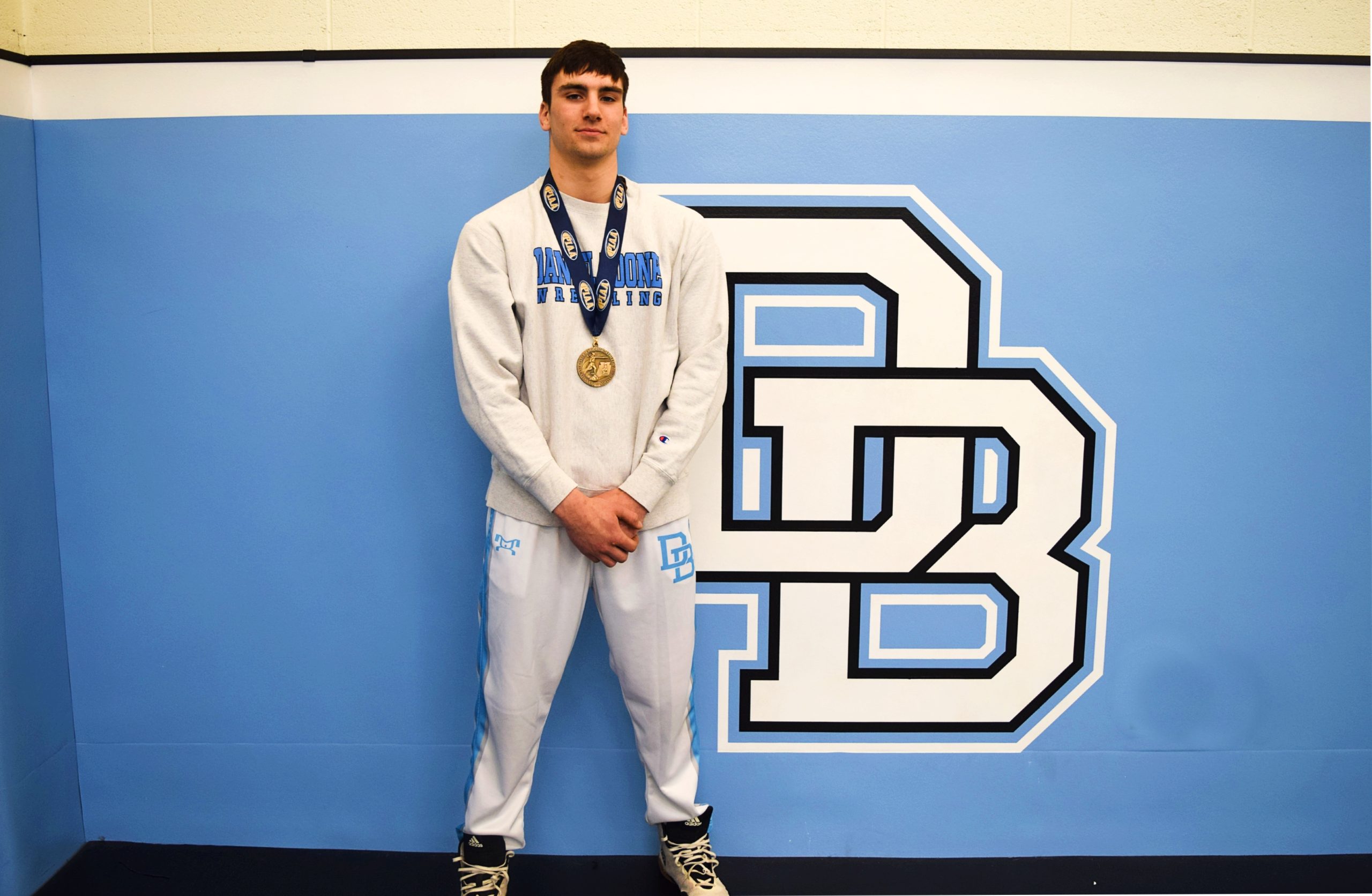 On occasion, a negative result can be the foundation for a successful finish.

Tucker Hogan found that to be the case this winter … not once, but twice. Still, he transformed the “lemons” into the “lemonade” of being the area’s top grappler during the season and the 2022 Mercury All-Area Wrestler of the Year.

The Daniel Boone sophomore compiled a 44-2 record and finished up as a bronze medalist in the PIAA Class AAA’s 172-pound field this winter. His dominating performance featured 22 pins and 12 technical falls, a championship in the Berks County Interscholastic Athletic Association’s individual tournament and gold medal in two other regular-season competitions.

Outside of the dominance, there were the blemishes: A pair of losses by a combined margin of two points. The second, to Interboro’s Dom D’Agostino in the PIAA’s semifinal round, derailed Hogan’s chance of being a state champion this year … but it did serve to galvanize his drive toward the highest medal finish possible.

“Losing in the semis, I was devastated,” he recalled. “I wanted to wrestle for first.

“When I lost, I wanted to go get the next best thing. My mindset was to get the job done.”

Fueled by memories of the 5-4 setback to D’Agostino, Tucker rebounded with a 6-4 decision of Belle Vernon’s Logan Hoffman in their consolation semifinal. That put him in a rematch with Canon-McMillan’s Matt Furman — they met in the quarterfinals, with Hogan a 6-5 winner — and scored a 5-3 victory.

“No way I was going to lose here on out,” Hogan recalled of his mindset after the semifinals. “That’s not what I came here for. I tried to do what I did the entire year.”

Daniel Boone’s Tucker Hogan works on top against Interboro’s Dom D’Agostino during a 5-4 loss in the 172-pound semifinal. (Nate Heckenberger – For MediaNews Group)

Another challenge surfaced before the season even started. While competing in an off-season tournament at Spooky Nook Sports Complex in Manheim in early September, Hogan shredded the medial meniscus in his knee; the condition was further complicated by a cyst growing in the lateral medial ligament.

Again, the less-than-ideal situation forced Tucker to respond in the best possible way he knew.

Again, he focused on making the best of the situation he faced.

“I had to keep my positioning perfect … do clean, crisp wrestling,” Hogan said, adding he modified his style a bit by working cross-wrist holds.
His dad/head coach, Jim Hogan, offered his younger son some valuable advice to deal with the situation.

“When Tuck hurt his knee, I talked to him about not showing weakness,” he said. “We practiced that every day.

“Showing weakness makes your opponent stronger. To not show any weakness, you try to keep a straight face when you’re hurting bad.”

Tucker proved to be more than equal to the challenge. He decisioned Cory in the semifinals, 6-2, before edging Jones in the gold-medal bout, 5-4.
“I saw a tough bracket to start the season,” Hogan recalled. “But after beating them, guys who were at the top, there was no doubt in my mind I could do that. It opened my eyes.”

Other tough competitors Hogan faced during the regular season were Suds Dubler of Glendale and The Hill School’s Zak Zindle. He scored a 5-1 decision against Dubler, the AA fourth-place medalist, in the Panther Classic championship match at Mount Aloysius College; and at the Exeter Blue/White Duals, he rolled up an 11-3 major decision on Zindle, who placed second at the PAISAA tournament and qualified for National Preps.

His only setback during the regular season came against another AA standout, Nolan Lear of Benton. In the championship bout of the Mid-Winter Mayhem at Indiana University of Pennsylvania, Tucker was nipped by Lear, the AA 172-pound bronze medalist, 2-1.

Across the board, his 2021-22 campaign enabled Hogan to put an abrupt-ending freshman season far in his rear-view mirror.

Working out of the Super Regional concept the PIAA adopted for the COVID year — the nominal first two rounds at a site other than Hershey, the remaining three establishing medal placement at the Giant Center — Tucker found himself joining then-teammate Stephen Spitko in West bracket action at Altoona. It ended up a two-and-done situation for both.

“I was disappointed to lose,” he recalled, “I didn’t wrestle well. I wished I could do it over.

“I think everything happens for a reason. I kept it in check, kept driving as much as I could.” Hogan has the added benefit of interfacing with a number of individuals very familiar with success at the sport’s highest levels.

Jim Hogan was a bronze medal wrestler in New Jersey in 1994. Tucker has two maternal uncles who had stellar careers at Line Mountain in the 1990s: Mike Shingara, a four-time state qualifier and three-time champion, and Max Shingara, a PIAA runner-up.

“They were at the (PIAA) tournament,” Hogan noted. “I talked with them about how they did. They helped me through it.”

And he’s currently working with Chance Marsteller, a legendary Pennsylvania scholastic grappler and college star who conducts training sessions for a select number of talented wrestlers in Reading.

Marsteller’s high-school resume’ sparkles with four state championships, three Most Outstanding Wrestler awards at states and a gaudy 166-0 record at Kennard-Dale. In college — he transferred to Lock Haven University from Oklahoma State — Marsteller was a 2018 All-American along with placing fourth at the 2017-18 NCAA Division I National Championships.

“He works the kids hard,” Jim Hogan said. “They come off the mats knowing they’ve been through a workout.”

The firmest plan Hogan has for the off-season is to undergo the procedure to get the damaged medial meniscus cleaned out, then rest it for 4-5 weeks.
“I’m going to keep training to get better,” he said. “Third is cool, but I can still win two titles. I’m going to work on technique and lifting weights.”

With a 62-5 record through his 44-win sophomore season, Tucker is in mathematical position to join older brother J.T. Hogan in the Boone program’s growing list of 100-win grapplers next winter. The elder Hogan finished his scholastic career with 113 wins, getting the 100th during the Blazers’ regular-season dual with Boyertown.

Already the Boone mat program’s highest-placing state wrestler, Tucker Hogan will shoot for raising that bar all the way to the top step of the medal podium at Hershey.

“He’s thankful for what he got,” Coach Hogan said, “but he wants to be on top. He’s helping put our program on the map.”