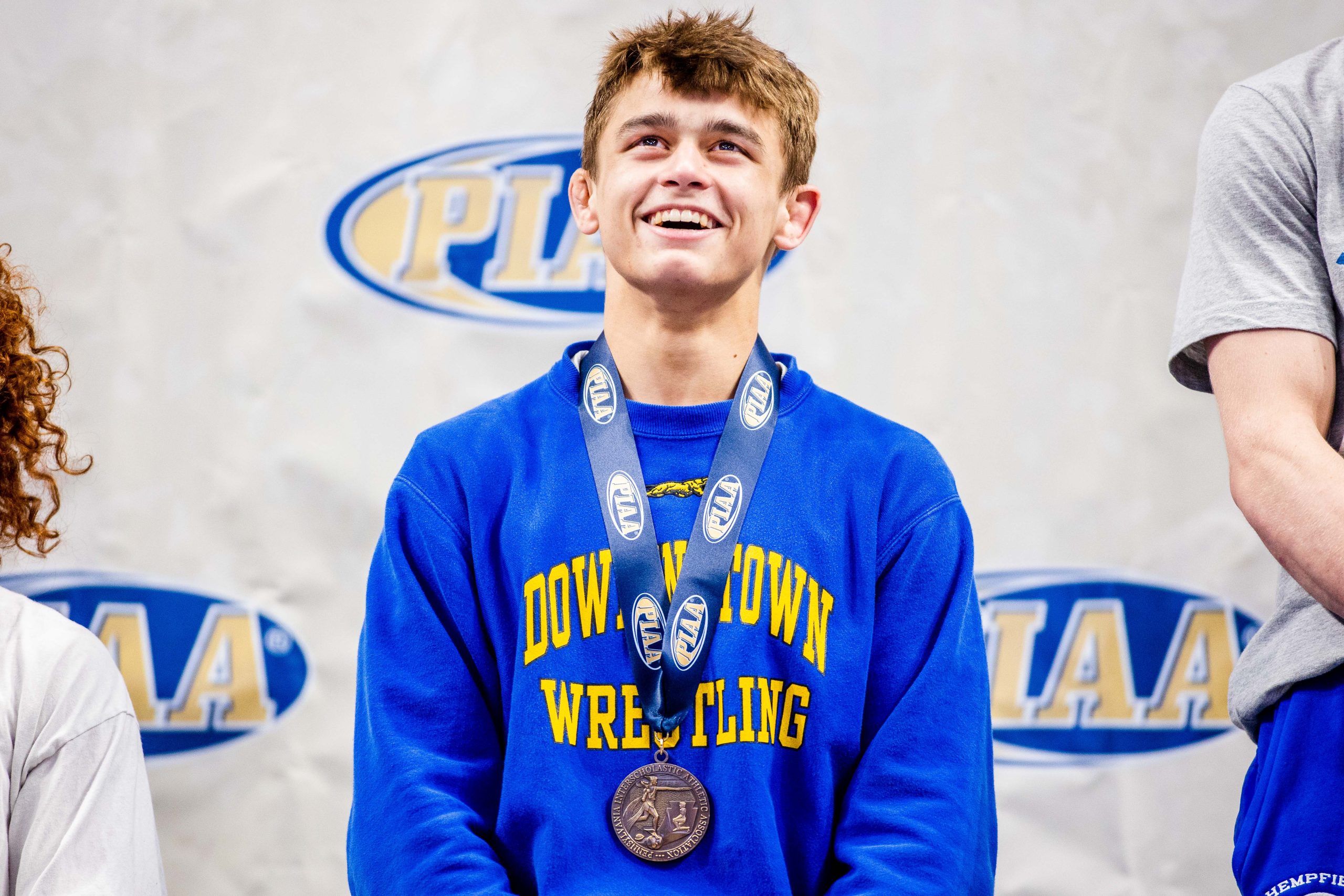 Downingtown West's Dom Findora has a smile on the podium after his fourth-place finish at 138 pounds. (Nate Heckenberger/For MediaNews Group)

HERSHEY >> Downingtown West coach, Brad Breese, knew he was getting a talented youngster when Dom Findora showed up as a freshman, he just wasn’t sure how far that talent would take him.

At that point, West was finally making some noise in the late 2010s, after a relatively bleak resume, state-wise, since the Downingtown district split in 2003. Everything was there for Findora to succeed — the teammates, the culture, the desire — and Saturday, at the Giant Center in Hershey, Findora’s career wrapped up with a confirmation of Breese’s early optimism.

“He was very talented, coming in as a freshman,” said Breese, of Findora. “He still had a lot to learn and he worked hard and was willing to learn. You could tell he was going to be good, but when you get to this level, it’s the extra work that separates good from really good.”

“I say it all the time, but I’m grateful for my coaches, my teammates, my family, my dog,” Findora said. “The work I put in my whole high school career, I’m glad to say I’m a two-time state medalist.”

It wasn’t the magical ending Findora dreamed of. That came to a halt when Hempfield’s Briar Priest defeated him, 3-1, in the 138-pound semifinals. But the Whippet senior bounced back, pinned Waynesburg Central’s Colton Stoneking in the consolation semifinals, before taking a 4-0 loss to Bethlehem Catholic’s Tyler Kasak.

Downingtown West’s Dom Findora gets in on a leg, but can’t finish against Hempfield’s Briar Priest in a 3-1 loss in the 138-pound semifinal. (Nate Heckenberger – For MediaNews Group)

“It was pretty important,” Findora said. “Stoneking is a great competitor and we wrestled a close match at the Beast of the East tournament, so I knew it would be a hard-fought match. I just wanted to wrestle hard and wrestle the way I know I can.”

If there was ever a display of the depth of the PIAA Championships, both Findora’s losses came to returning state champions, and neither won, Saturday night. The kid who beat both them, State College’s Pierson Manville, was voted Outstanding Wrestler of the tournament.

In Downingtown’s final season as a singular high school, Jake Rathfon and Ben Young took second and seventh in the state, respectively. In West’s first 13 seasons, Pat May’s eighth-place finish in 2007 was the only medal earned for the Whippets.

Then Doug Zapf showed up and won a state title and finished runner-up, Max Hale collected three medals and Chase Mielnik earned some hardware, from 2017-2020. Findora has won the last two, to push West’s total to nine, and while they will likely produce another medalist, finding another Findora is more unlikely.

“You don’t replace him,” Breese said. “You just hope somebody else does something similar to the things he did for the program. Him getting the sportsmanship award at regionals said it all. He’s a good kid, he’s a good wrestler. He works hard and he cares about his team, his community and his school. There’s nothing you can say that he does wrong. When somebody like him comes through, you cherish it.”

Findora finished his career with a 134-31 record, tying him with former Owen J. Roberts’ wrestler, Aaron Brown, for 26th on the all-time wins list for Chester County. His seven state-tournament wins are fourth most in Downingtown history, tied with Glenn Koser, Brad Forbes and Zapf, and behind Hale (nine), Mark Conley (eight) and Wade Cummings (eight).

After graduation, Findora is heading to Drexel University, where he hopes to continue his ascent as a wrestler.

“I’m excited to get to the next level and try to be an NCAA All-American and an NCAA champ,” Findora said. “(Interboro’s state runner-up) Dom D’Agostino and I are looking to be roommates and we want to do some damage in the city.”

No doubt, Reggie (the dog), will be proud.