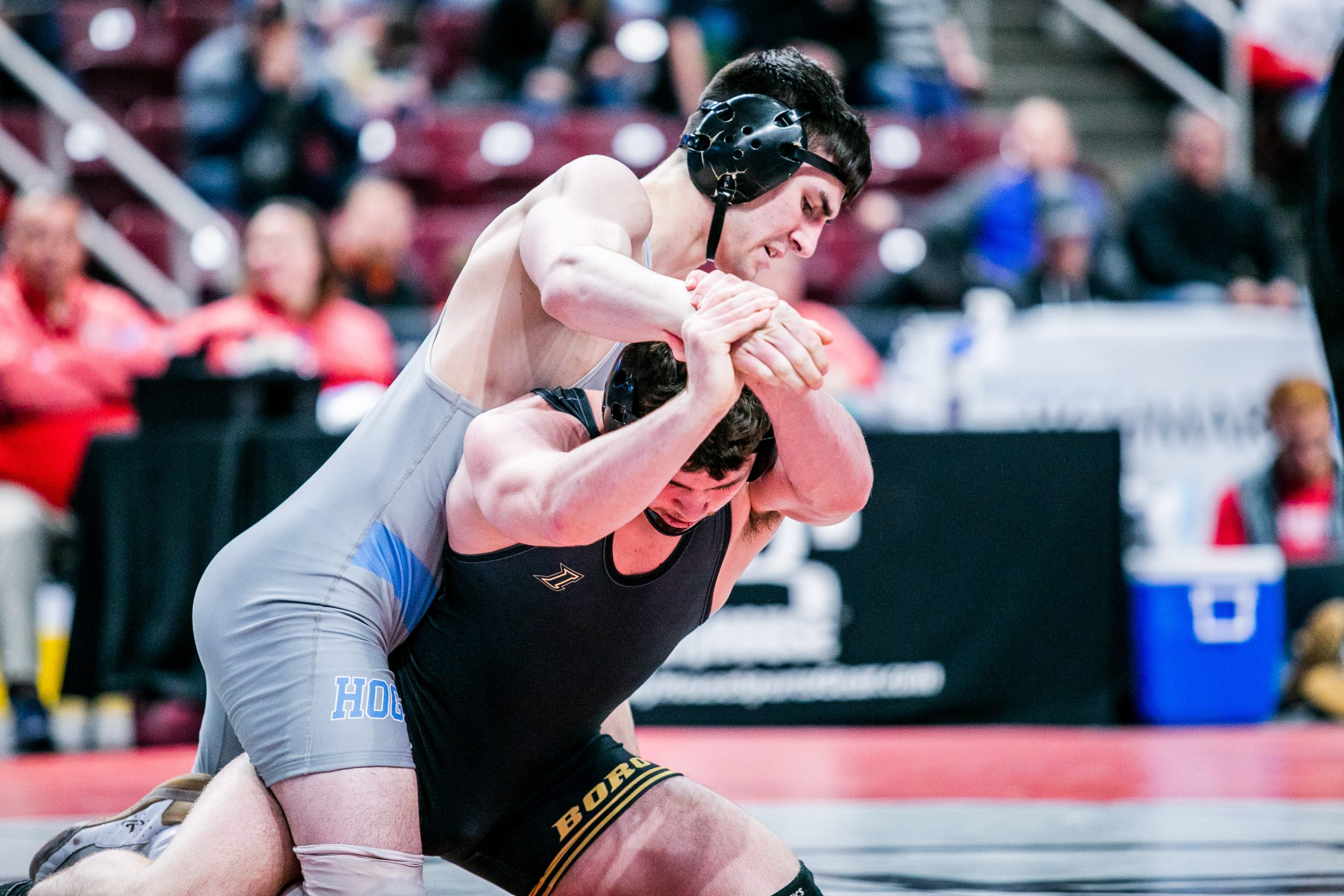 Daniel Boone's Tucker Hogan works on top against Interboro's Dom D'Agostino during a 5-4 loss in the 172-pound semifinal. (Nate Heckenberger - For MediaNews Group)

HERSHEY >> Occasionally, a positive outcome can grow out of a negative.

Tucker Hogan demonstrated that Saturday at the PIAA Championships. The Daniel Boone sophomore found his drive to a gold medal derailed by Interboro’s Dom D’Agostino in a Class AAA 172-pound semifinal. The 5-4 loss, the second time this season he lost a match by a one-point margin, served to galvanize his resolve to make the best of the situation he faced.

It was played out in the third-place match with Canon-McMillan’s Matt Furman, Hogan toughing out a 5-3 decision to finish as the highest-placing wrestler from The Mercury’s coverage area.

The loss to D’Agostino was even more impacted by the fact Hogan (43-2) ran out of time shooting a takedown move that would have given him the winning lead, and a spot in the championship bout. But it didn’t have a negative effect on his mindset.

“I thought I had it at the end,” he said, “but I couldn’t secure it. I told myself there was no way I was going to lose here on out. It’s not what I came out here for.”

Hogan’s rebound began in the fifth-round consolations, where he topped Belle Vernon’s Logan Hoffman, 6-4. Against Furman, Tucker scored a pair of second-period takedowns to Furman’s escape from a bottom start and a penalty point to take a 4-2 lead into the third.

Furman’s decision to release Hogan from his bottom start in the third boosted his lead to 5-2. Another stalling call got Furman one point closer, but not enough to erase Hogan’s lead.

Hogan’s success was made even more significant by the medical situation with his right knee. He is dealing with tears of the medial and lateral menisci, a program aggravated in Friday’s quarterfinal match with Canon-McMillan’s Matt Furman, who he edged in a 6-5 decision.

“It’s not a fun thing to do,” he said, “but it keeps me on my toes staying in shape. It’s the best thing to deal with it.”

Owen J. Roberts’ Dillon Bechtold tries to fight off a takedown against Waynesburg Central’s Rocco Welsh in a loss by technical fall in the 172-pound semifinal. (Nate Heckenberger – For MediaNews Group)

Tucker’s father/head coach, Jim Hogan, had reason to feel doubly proud with his younger son’s accomplishment. He also took pride in the best showing of any Daniel Boone team in the state tournament.

“This is our biggest group of qualifiers (three), and the most medals (two) we’ve ever won,” he said.

The other medal finisher was 106 pounder Dean Hoffman, who came away from the weekend at the Giant Center in sixth place.
Houser’s first trip to the state championships exceeded his expectations.

“I did better than I thought,” he said. “I wrestled some kids who were ahead of me in the rankings. There was a lot of pressure, but I won matches.”

One of the bouts was against Aiden Beimel of St. Mary’s, the North West AAA Regional champion who he handled 3-1 in the opening match.

Houser, 3-1 at 106 through the tournament’s first two days, continued his strong run Saturday by pinning Council Rock South’s Luke Reitter in 2:42 during their fourth-round consi. But in the fifth round, he was edged by Franklin Regional’s Tyler Kapusta, 4-3.

The medal round pitted Houser (41-8) against Haverford High’s Cole McFarland, who bumped him into the consis with a 7-0 decision in the quarterfinals. He had a slight improvement in the rematch, which ended up 6-0 in McFarland’s favor.

Houser was the mainstay, alongside teammates like Hogan brothers J.T. and Tucker, of a Blazer squad which focused on individual performances while not having the manpower to fill a lineup that could impact the Berks League standings.

“The team’s numbers weren’t the best,” he agreed, “but the kids we had were good. We had tough kids, and a good group.”

The 172-pound weight class was the stage for another local medal finish, this by Owen J. Roberts’ Dillon Bechtold. The Wildcat sophomore regained the pace that got him off to a strong start, resulting in a 9-6 decision of Belle Vernon’s Logan Hoffman and a fifth-place medal.

“I was relentless on my attacks, opening up,” he said. “I felt loose out there. I think I was nervous earlier.”

Owen J. Roberts’ Dillon Bechtold gets a leg against Belle Vernon’s Logan Hoffman on his way to earning fifth at 172 pounds. (Nate Heckenberger – For MediaNews Group)

Boyertown’s Chance Babb scores a reversal against Franklin Regional’s Finn Solomon in a 14-4 loss in the 145-pound semifinal. (Nate Heckenberger – For MediaNews Group)

“I knew at states it’s not what you won,” he said. “Everybody’s good.”

The medal match went 0-0 in the first period. But Bechtold executed a reversal to start the second period.

“That set the pace for the rest of the match,” he noted.

Boyertown senior Chance Babb concluded his scholastic career with a sixth at 145. It was a dogfight with Hempfield Area’s Tyler Kapusta, who used a second-period escape from a bottom start to come away with a 1-0 victory.

“I started well,” Babb, who reached the semifinal round with a 6-3 sudden victory over Highlands’ Jrake Burford and a 7-4 decision of Octorara’s Michael Trainor, said, “but I didn’t finish exactly how I wanted. But I can walk away a happy man.”

Babb (41-9) sustained a 14-4 major decision against Franklin Regional’s Finn Solomon in their semi at 145. He was then part of a full-time overtime with Nazareth’s Nicholas Foster, ultimately coming up short 3-1.

Against Kapusta, Babb had a takedown move going in the last half-minute. But Kapusta held on and thwarted Babb’s completion of the move.

“A couple more seconds, and I would have had it,” he said.

At 138, Perkiomen Valley’s Kelly Kakos ended up sixth with a 6-4 loss to Waynesburg Central’s Colton Stoneking.

Kakos, who won three straight at 138 after an opening-round loss Thursday, extended the streak to four with a 5-4 decision of Manheim Township’s Aliazer Alicea Saturday morning. He then got derailed by a technical fall against Bethlehem Catholic’s Tyler Kasak.

NOTES >> Pierson Manville of State College, winning the 138-pound title in overtime, was named Class AAA’s Outstanding Wrestler. … Nazareth, with two individual champions among its eight medalists, was the team champ with 135 points. Bethlehem Catholic was second with 109, and Daniel Boone was the area’s highest-finishing team at 22nd place.