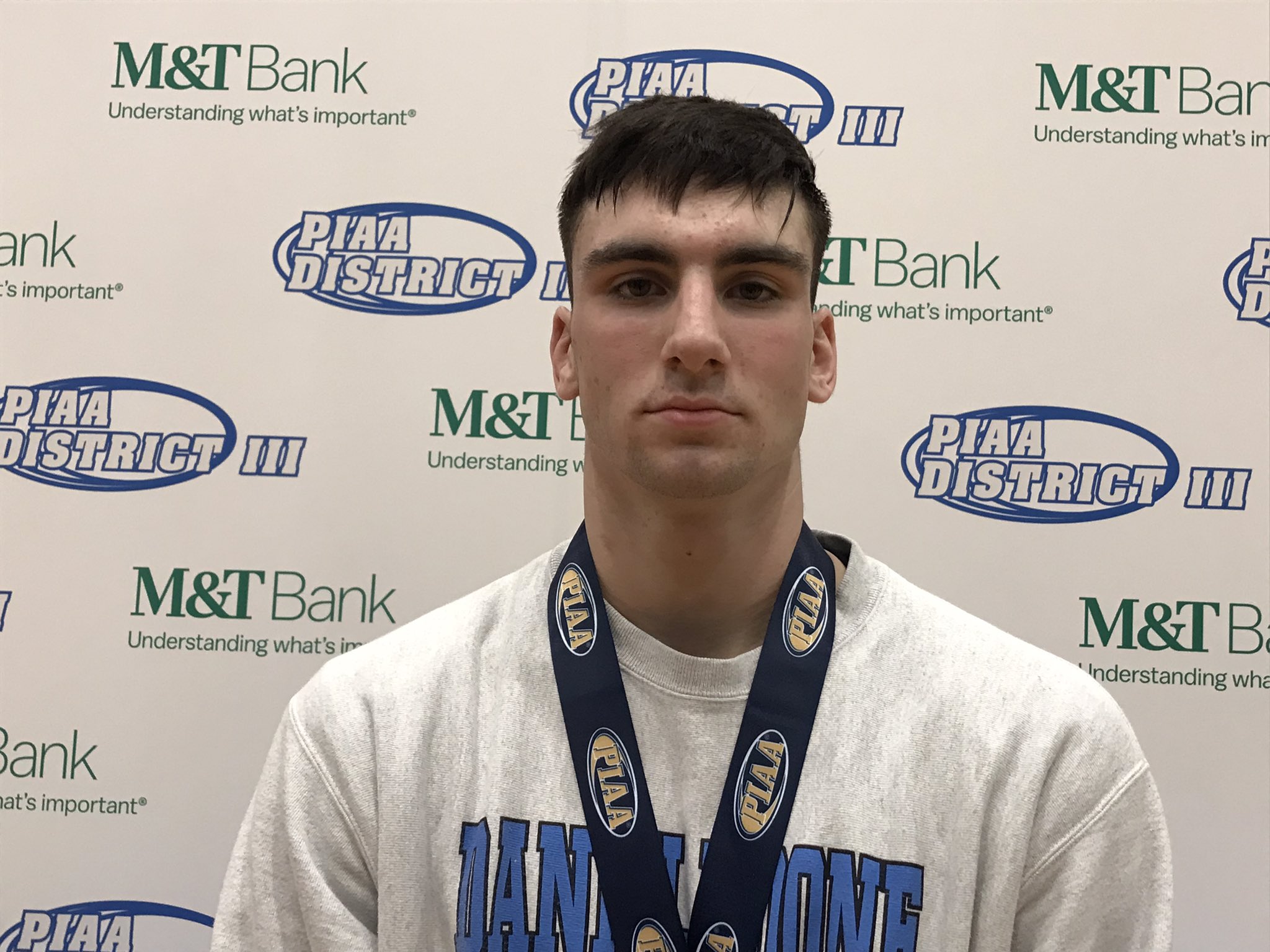 Tucker Hogan is adding to his high-school wrestling resume’ in a big way.

The Daniel Boone sophomore headed his team’s showing at the South Central AAA Regional this weekend by winning a gold medal. He pinned and technical-fell his way through the 172-pound bracket to score a gold medal in advance of the PIAA Class AAA tournament coming to Hershey’s Giant Center in two weeks.

Hogan (40-1) capped his run with a 4:35 pin of Manheim Township’s Kevin Olavarria. Earlier bouts saw him score pins in the first period before racking up a 17-1 tech-fall of Manheim Central’s Brett Barbush.

It was a step up for Hogan, who placed second in the 2021 regional. He went out of the West AAA Super Regional — equivalent to the first two rounds of states in a normal situation — in two matches.

Boone also had a pair of bronze-medal performers in Dean Houser and J.T. Hogan. Houser pinned Warwick’s Marco Tocci in 4:48 at 106 while Hogan edged Lebanon’s Griffin Gonzalez, 6-5, at 152.

Another medalist was Gavin Richard, who placed fifth at 120 with his 5-2 decision of Chambersburg’s Luke Mentzer.

Boone placed sixth among the 46 teams in the regional field, the highest of any Berks League entries.

Alexander, a state medalist in 2021, placed second at 160. The senior (21-5) pinned his way past Ryan’s Colin Alloway and Springfield Township’s Jack Hyland before forfeiting the title bout to Faith Christian Academy’s Luke Sugalski.

Pires was another runner-up at 106, The sophomore (18-14) scored a pin on Ryan’s Quinn Kennedy and overtime decision of Archbishop Carroll’s Joe Wood but dropped a 10-0 major decision to Faith Christian’s Sam Hunter.

Zambrano, wrestling at 189, placed third. The Golden Panther sophomore (6-6) worked his way through wrestlebacks after losing to the eventual champion, Owen Hussie of Springfield Township, in the semifinals. He capped the comeback with a 5-4 overtime win against Ryan’s Max McKinstry.

The next level for PJP will be the South East AA Regional taking place next weekend at Bethlehem Freedom.

Isabelle placed fifth at 160, scoring a 3:44 pin on Malvern Prep’s Owen Quinn. It was the second bout between them, Isabelle edging Quinn 6-4 in the quarterfinals.

Sloan went 5-4 in the tournament. scoring two pins and a major decision.

Griffin was 5-4 for the weekend. He advanced as far as the semifinal round before being dropped into wrestlebacks.

The Hill was 15th in the team standings with 62,5 points. The team champion, Wyoming Seminary, had four champions among 13 wrestlers placing through fourth in their brackets and 346.5 points.

Highlights: Mairi Smith scored the game winning putback with less than 30 seconds left as the third-seeded Warriors (21-4) earned a trip to states for the second time in three seasons and sixth time in program history with Saturday’s District 1 playback victory.

Nicole Timko stuffed the statsheet with 16 points, 10 rebounds, six assists and four steals, and Smith put together a 19-point, 10-rebound double-double. Tori Bockrath chipped in another eight points for the Warriors.

Highlights: Ethan Meuser led the way as the sixth-seeded Blues knock off the third-seeded Lions in Saturday’s PAISAA quarterfinal. Meuser scored 28 points, grabbed six rebounds and added two assists and two steals in the win, which avenged an overtime loss to Phelps earlier this season. Augie Gerhart added 12 points, four rebounds and two assists. The Blues will face Perk School in the semifinals on March 4.

Highlights: The third-seeded Panthers cruised to a win for the second night in a row to advance to the PAISAA semifinals. Xaivian Lee led the way with 22 points. Daouda Dembele added 13 and Thomas Haugh chipped in 12 to set up next week’s matchup with Hill.

Highlights: The third-seeded Phantoms saw their season end with a loss to the seventh-seeded Marple Newtown in Saturday’s District 1-5A playback game.

Senior Zavier Mayo scored 13 and senior Gabe Massenburg added 10 in the Phantoms’ loss. Phoenixville finishes its season with a 17-9 record.