Babb, Kakos come away with much more than 8th place finishes from first trips to Hershey 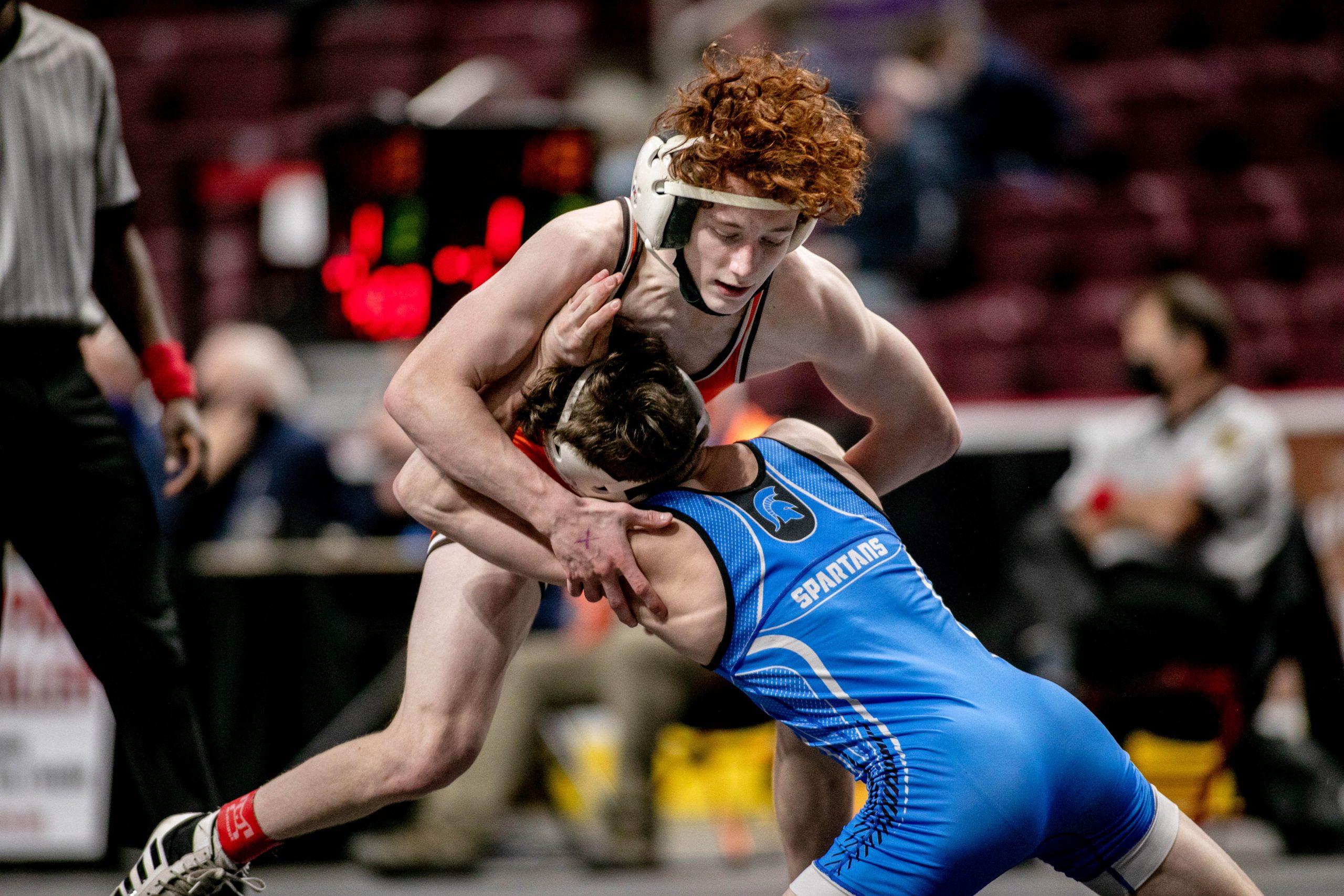 HERSHEY >> As much as climbing the podium was a goal coming in for Perkiomen Valley sophomore, Kelly Kakos, and Boyertown junior, Chance Babb, getting this experience under their belts was just as important.

It was a bit of schooling for the Pioneer Athletic Conference duo in their first Class 3A PIAA Championships tournament at the Giant Center in Hershey, but with state medals now around their necks, Kakos and Babb are ready to build, going forward.

The tournament alternated sessions between the 106-138-pound weight classes and 145-285, and Kakos (132 pounds) and Babb (138) finished eighth in the first session of medal rounds.

“It was good for my first time,” Kakos said. “I had some good matches, but I have some things to work on.”

Kakos had a rough introduction to the state grind with a 12-2 loss to eventual champion, Briar Priest of Hempfield. In the consolation bracket, Kakos’ comeback attempt against Waynesburg Central’s Colton Stoneking came up just short, 7-6.

In the seventh-place bout, he saw Nazareth’s Dominic Wheatley for the second straight week and but came out on the wrong side of the rematch. Kakos wasn’t happy with his results, but has now has a better base to build on.

“I have the experience and now it won’t be as new next year when I get back here,” Kakos said.

The loss against Wheatley keeps Kakos at 49 victories for his career, but Perk Valley coach Dave Thomas does not foresee another 44-year state medal drought that Kakos ended.

“It’s great getting kids here after 44 years of not having any place-winners,” Thomas said. “We were able to get 20 tickets and got to bring some of the team. There’s some freshmen and sophomores who get a feel for being here and hopefully that’s a little motivation for them to try to get come back here and get on the mat.”

Babb made major strides as a junior, after going 0-2 in Hershey as a sophomore. He reached his first regional final and went 3-1 at the East Super Regional to earn his first trip to the state podium.

In Hershey, Babb was victim of a brutal bracket, dropping a decision to Waynesburg’s eventual runner-up, Cole Homet, in quarters and then again to Council Rock North’s Kyle Hauserman, who was upset in his opener.

For seventh, Babb faced Bethlehem Catholic’s Andrew Harmon for a second straight week and could not get out from under, resulting in a 1-0 loss.

“I didn’t meet my goals for this year, but it will just make me work harder in the offseason,” Babb said. “I’m going to push my teammates, as well as myself, to be the best we can.”

Boyertown’s Chance Babb gets in on a shot against Bethlehem Catholic’s Andrew Harmon in a 1-0 loss in the 138-pound seventh-place bout. (Nate Heckenberger – For MediaNews Group)

Babb gave Boyertown its 35th state medalist in program history and is sitting 35 wins away from 100 for his career.

With Spring-Ford’s state medalist duo, Jack McGill (160) and Joey Milano (189) graduating, Babb and Kakos, as well as Pope John Paul II’s Alan Alexander (152), take over as the flag bearers for the PAC as returning state placers.

“Any time you have returning medalists in the PAC, it shows great signs,” Boyertown coach Tony Haley said. “I hope all the kids in the PAC look at those kids, Kakos and Chance, have done. Those two kids work and work and work and look to improve. This one stings for (Chance), but hopefully that motivates him to keep getting better.”