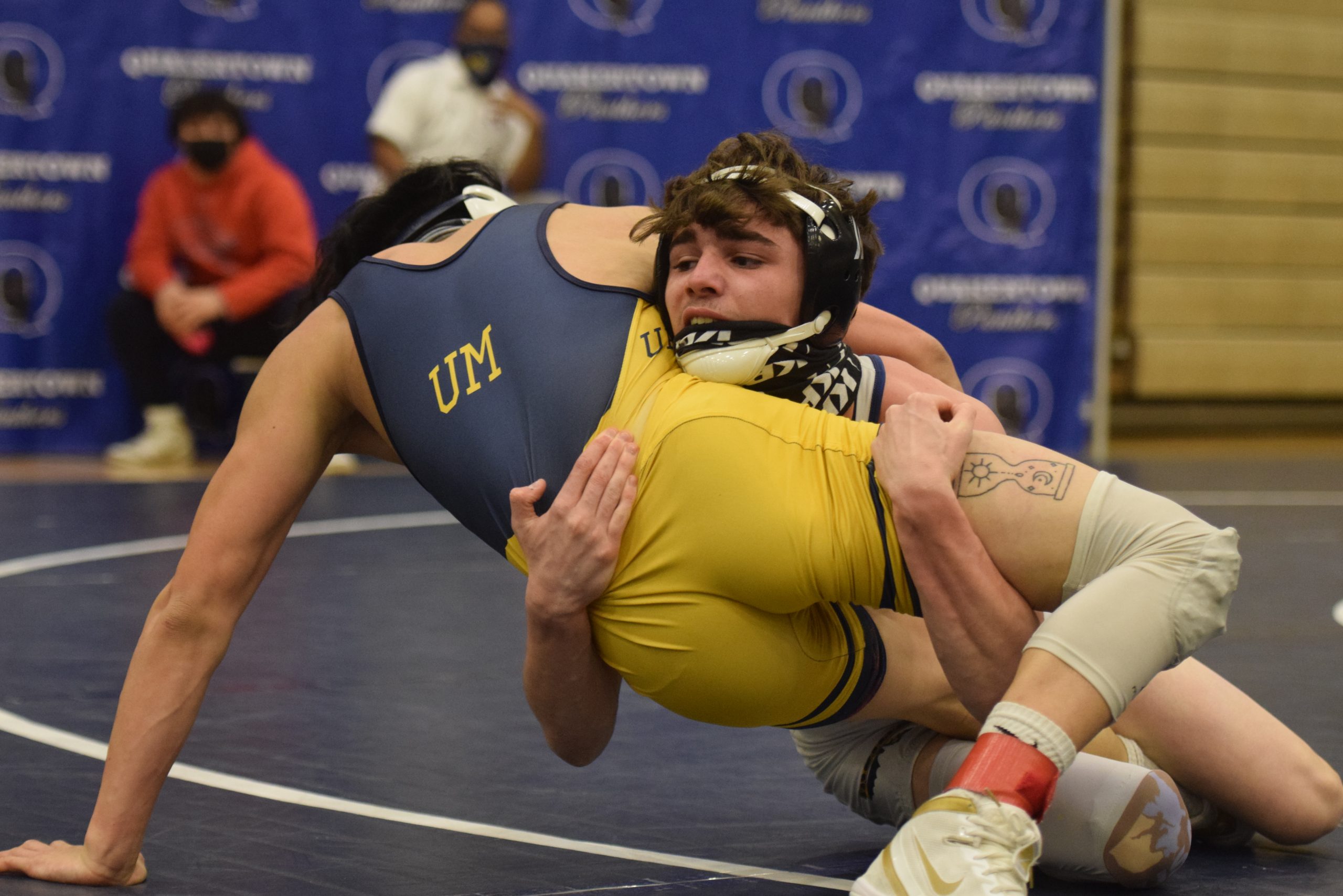 They all have prior experience in wrestling at the regional level in Pennsylvania.

Suffice it to say, a trio of Pioneer Athletic Conference small-school grapplers from the area is looking to improve on their previous showings at that level this weekend.

The athletes — Manny Allen from Pottsgrove, Joey Carpenter and Matt Milkowich from Upper Perkiomen — will be part of the contingent of 17 Pioneer Athletic Conference qualifiers heading to Newtown for the South East AAA Regional Tournament being co-hosted by Council Rock North and South high schools.

Allen (7-1) comes in as the North third seed at 285, having gone overtime last weekend against Quakertown’s Frederick Retter for a 7-2 decision. He will be looking to move up from his 1-2 regional showing of one year ago.

“There are a lot of good kids in (District 1-AAA) South,” he said, “but anything can happen.”

Allen will face South runner-up Matt Micale of Downingtown West to start. One personal goal for the weekend is to do better on getting up from bottom starts.

“I have to keep my head on straight,” he noted. “Last year I went out on the second day. I hope this year will be different.

“There are different kids with others graduating. It’s all new to me. I’m hoping to go one, two or three.”

Milkowich (10-4) got to the South East AAA medal round last winter, placing sixth at 106. As a freshman, he went two-and-out.

As the North fourth seed, the junior will face a known opponent in Dominic Ortlip. The Spring-Ford junior (12-1) was the South’s champion, one of four such finishes by Rams on their way to a team championship.

He will look to address several aspects of his style at the regional.

“The bottom, getting out,” he said. “Hand fighting, bars, taking back control.”

Like Allen, Joey Carpenter (9-5) went 1-2 at 126 in last year’s regional. Placing fourth at districts, he faces Downingtown West’s Dominic Findora, the South champion, in the opening round.

“I’m working my bottom game, to get out,” he said. “And the neutral game, getting takedowns a lot. I’m also working on basics and techniques.”

Carpenter was one of UP’s six seniors recognized by the school prior to Wednesday’s PAC Frontier Division match with Pottsgrove. His future plans call for wrestling and pursuing studies in criminal justice — possible schools on his list include Elizabethtown, King’s and York College — and going into the U.S. Army National Guard.

More immediately, though, is extending his scholastic mat career to the fullest extent possible.

“For me, trying to get past the regional, I have to keep working,” Carpenter said. “In the super-regional, three wins gets you to states.”

The regional will offer Spring-Ford another chance to excel in an already-successful season. The Rams went 10-0 in a regular season that saw them claim the PAC championship, came away from District 1-AAA South with five high medalists — two more came up one win short of the medal round — along with the team title, and qualify for next month’s District 1 team duals championship match.

SF’s other golden grapplers along with Ortlip were Cole Smith (106), Jack McGill (160) and Joey Milano (189), with Zach Needles (152) scoring silver. McGill and Milano will look to upgrade from last year’s runner-up outings, and the Rams to improve on their second-place team showing.

They all contributed to the Bears’ fourth-place team finish at South. Sheridan and Gehris are freshmen, Heimbach a sophomore.

Perkiomen Valley has two South champions in the regional: Kelly Kakos at 132 and Grant Euker at 189. Kakos (12-0) was a 1-AAA North champion as a freshman, and Euker placed fourth at 160.

Other PAC contestants will be Phoenixville’s Owen Koch at 172 and Upper Merion’s Ayden Cheng at 126. Koch and Cheng, both 11-2, placed third at South districts.

The day’s competition will get under way at 10 a.m., the field split between North (weight classes 106-138) and South (145-285). The quarterfinal, semifinal and two consolations rounds will pare down the contestants for the 1:30 p.m. championship and consolation finals, which will place wrestlers through the first six spots in each bracket.

He made a repeat showing as a District 1 champion this season, in the process qualifying again for South East Regional competition.

This time around, under a different scenario, Alan Alexander is looking for a post-season extended beyond his showing in 2020.

Alexander, a District 1-AAA North champion with Boyertown last year, transferred to Pope John Paul II this school year. This past weekend, he was 152-pound champion in the District 1/12-AA competition at Faith Christian Academy.

Alexander (10-1) won in the gold-medal round due to a forfeit by Conwell-Egan’s Dylan Culver. The Golden Panther junior had just one bout, scoring a 4:14 technical fall in the semifinal round.

They were a guiding force in their team’s success thus far in 2021.

Now, five members of the Daniel Boone mat program are looking to enhance their regular season with notable performances in the post-season.

The Blazers’ credits this winter include a 5-0 run in the Berks League’s Division I (11-2 overall), a runner-up showing in the BCIAA Team Duals and a second-place team effort in last weekend’s District 3-AAA Section 1 competition, Next on tap is the South Central AAA Regional Saturday at Spring Grove.

Joining the Hogans at regionals will be a trio of Blazer silver medalists: Gavin Richard at 120, Stephen Spitko at 126 and Colin Leahy at 285.

Richard (15-2) will open against Karl Shindledecker (16-0), a junior from Chambersburg; Spitko (15-2) against another Chambersburg grappler and district titlist, sophomore Luke Mentzer (16-3); and Leahy (12-4) against Red Land’s Dylan Rodenhafer (16-0). All three were champions of their weights at the District 3-AAA Section 3 tournament.