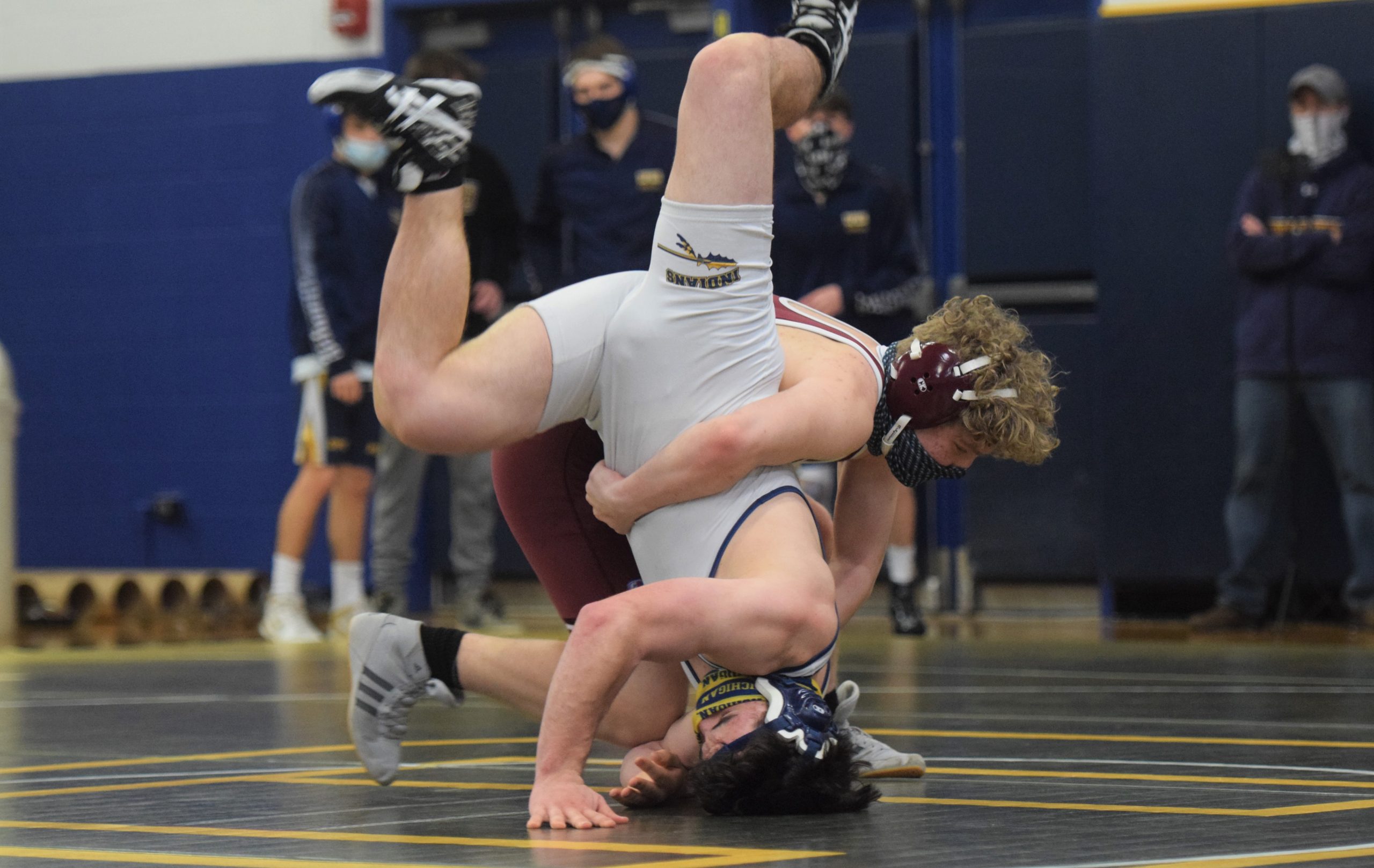 RED HILL >> It’s been a most unconventional wrestling season for Upper Perkiomen.

Not in terms of success, of which they had a considerable amount and stand to continue. No, the bugaboo for the Indians has been the juxtaposition of the regular and post-season calendars from what they had been accustomed in the past.

A case in point occurred Wednesday when Upper Perk found itself closing out its dual-match schedule by hosting Pottsgrove — all that stood between it and a sweep of the Pioneer Athletic Conference’s Frontier Division – sandwiched between the first and second weekends of individual tournament time.

On the occasion of their annual Senior/Parent Recognition observance, the Indians rolled up a 54-16 victory on a Falcon unit whose own bid for a Frontier sweep was hampered by a couple coronavirus-related shutdowns.

Now, the program’s focus centers on the weekend’s South East AAA Regional tournament and its two grapplers who qualified for it, senior Joey Carpenter and junior Matt Milkowich.

“Every day, we go in and work hard,” Carpenter said of his team’s approach to the unsettled season. “We just keep battling. It’s a little nerve wracking, though.”

There was nothing about UP’s performance in its regular-season finale that wracked anybody’s nerves … at least the Blue and Gold supporters. It led after Keaton Durning, one of the team’s six seniors, scored a pin 3:42 into the 152-pound opener. The home team followed with four more drops, two decisions and a pair of forfeits to lay claim to being the class of the Frontier Division, though divisional champions were not individually acknowledged this season.

“The whole last two weeks,” Milkowich, Upper Perk’s other regional-bound representative, said, “we talked about being able to beat Pottsgrove. We wanted the team to win.”

The Indians’ entire Class of 2021 contingent got on the mats for their home and season finale, with a majority producing. Along with Durning, Soren Svanson (172) and Robby Carpenter (126) scored pins while Jake Ankele (120) and Joey Carpenter (132) were awarded forfeits.

“This is a good group of seniors,” UP head coach Steve Adam noted. “We’re going to miss these six seniors. They’ll be tough to replace.”

Pottsgrove (2-1, 2-3) found itself shut down following a Jan. 30 match with Spring-Ford to last weekend’s District 1-AAA North tournament. While its lone regional qualifier, Manny Allen, holds the program’s hopes for additional success this season, the end on its other fronts has been accepted.

“The focus now is on the regional and what Manny can do,” Falcon head coach Jeff Madden said. “It’s unusual, having a dual three days before the regional. It was tough, being shut down twice.”

Still, the closer left Madden with some good feelings about a team that had only one senior, Tony Lindgren. Trenton Allen, a sophomore, scored a pin at 138; freshman Bryce Caffrey posted a major decision at 160; and another freshman, Ado Resendez, was awarded a forfeit at 285.

“It was good to see our young guys do well,” Madden said. “The final score didn’t indicate that.”

Milkowich thought he might not have a bout at first, but he didn’t decry the change in status that got him one more bit of action leading into the regional.

“I wasn’t expecting a match,” he said, “but their kid (Christian Drager) dropped a weight. It still felt good.”

NOTES >> Allen, Joey Carpenter and Milkowich all have previous regional experience under their belts. Milkowich placed sixth at 106 in his sophomore season (2020). … Daniel Hawkins was UP’s other senior honored pre-match; he wrestled at 160. … Another person recognized by Upper Perkiomen was Tim McDermott, for logging 30 years as a scoring table worker at wrestling matches.