Smith, Ortlip push each other, Spring-Ford to team title at District 1-3A South tournament 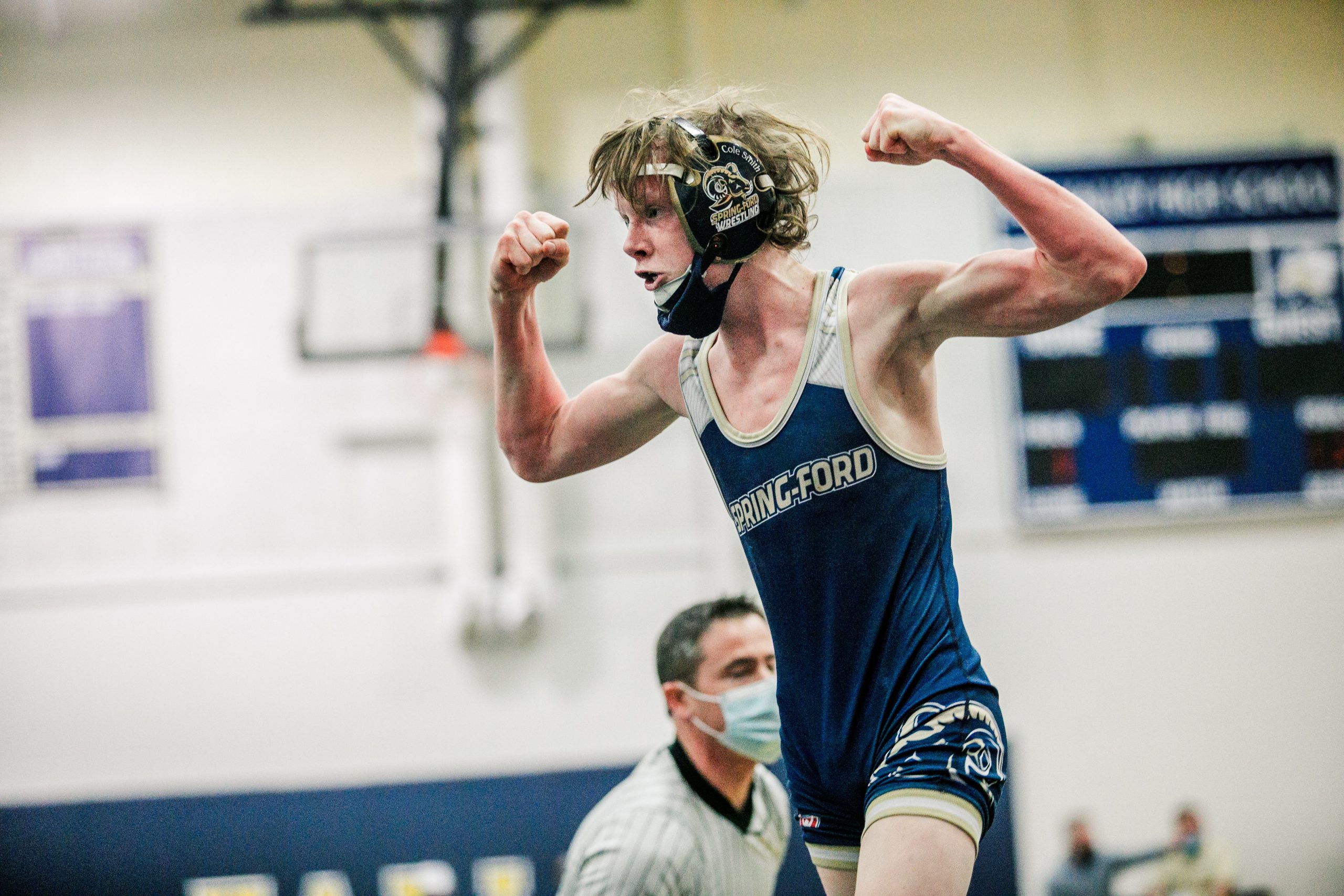 ASTON >> A year ago, Spring-Ford’s Cole Smith found himself the odd man out for the postseason in a crowded Ram lineup.

Dom Ortlip dropped to 106 and managed his way to the state tournament, while Smith could only watch and let the motivation fester.

Saturday, at the District 1-3A South tournament at Sun Valley High, Smith (106 pounds) made up for lost time and joined Ortlip (113) as two of the four champions for Spring-Ford, who claimed the team title.

“It felt super good,” Smith said. “Last year, losing my spot to Dom, sucked. Coming back and winning in the district finals, it feels great and I worked hard for it.”

Knotted in a scoreless second period, Smith found himself in a scramble with Haverford’s Cole McFarland and landed on top for the pin.

“I knew I needed to be in better position and I knew I wanted to score,” Smith said. “If I wanted to end it early, it had to be then.”

Ortlip went all six against West Chester Henderson’s Carmen Cortese, but was never in danger and rolled, 11-2.

“In the room, we push each other, nonstop,” said Ortlip of he and Smith. “However hard we can, we go to make each other better so we can do stuff like this.”

Boyertown’s Jay Maldonado (120) continued the Pioneer Athletic Conference dominance of the lightweights with a 4-0 win over Downingtown East’s Keanu Manuel.

It was the third time in as many tries Maldonado has defeated a foe he very well may see again, next week.

“It’s definitely tough to go up against an opponent who’s comparable to you,” Maldonado said. “We’ve known each other since we were young and we wrestled on the same team, so it’s always good to wrestle him.”

Boyertown tied Spring-Ford with a a PAC-high, five regional qualifiers, with Gavin Sheridan (106), Luke Heimbach (113), Chance Babb (138) and freshman Ryder Gehris (145), who was one of two No. 8 seeds to advance, joining Maldonado.

“I’m super happy with the way Ryder is wrestling,” Maldonado said. “Me and Chance have been working with him, getting him up to speed in the short time we’ve had, and he’s doing pretty good.”

Zach Needles (152) dropped a decision to Strath Haven’s Chase Barlow in the finals, but Jack McGill (160) followed with a commanding 9-1 win over Downingtown East’s Bo Horvath.

After the most unusual of regular seasons, McGill and his teammates are glad to be back chasing the ultimate prize of a state championship.

“That’s clearly the biggest thing each year for us,” McGill said. “Even with Covid, we’re trying to focus on that and focus on our goals and getting medals.”

“I’m acting like this could be the last time I wrestle,” Milano said. “I’m staying focused every match and know that anything could happen. I’m trying to prevent getting another injury.”

It was one of those days for Owen J. Roberts, who sent zero wrestlers to regionals for the first time since 2001.

“That was a complete meltdown” OJR coach Steve DeRafelo said. “A lot of things were outside our control this season, but we had the challenge of coming in and competing and we didn’t. Too many points in matches we just stopped wrestling.”

Five Wildcats were voted into the tournament, but now, DeRafelo knows, it’s time to see how his team will respond.

“There were a lot of things that were out of our control, but starting tomorrow, it’s in our control,” DeRafelo said. “We’ll see if the kids are willing to get in the weight room and practice and do freestyle. We’ll be there for them if that’s what they decide they want to do.”