Bout or not, Ryan Catka making an impact for Sun Valley 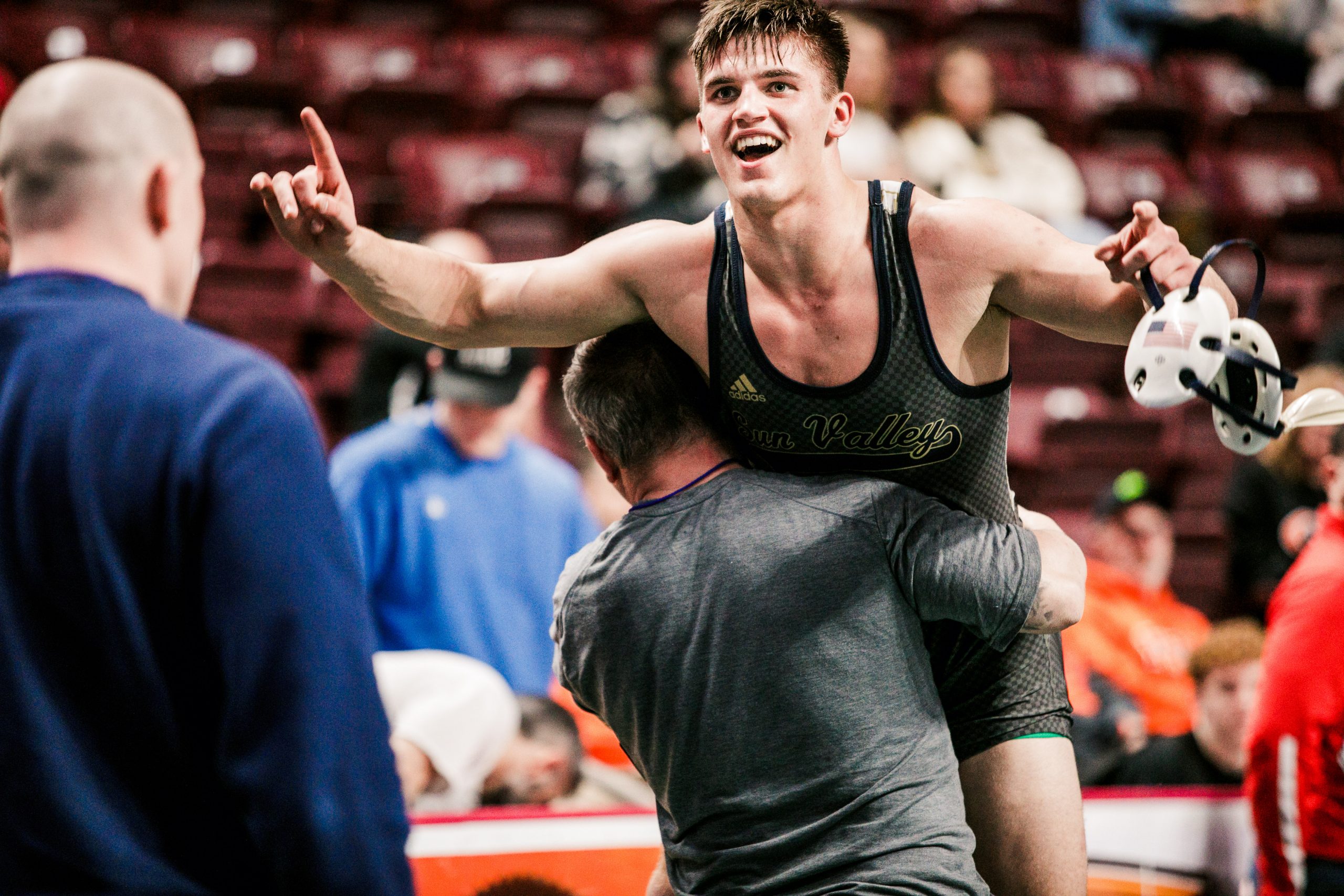 Even when not wrestling, as he was at states last year, due to a lack of opponents, Sun Valley's Ryan Catka is a valuable asset to the Vanguards program this season as a senior leader.

WEST CHESTER — The participation numbers for Sun Valley wrestling are down, just as they are throughout Delaware County, thanks to the COVID-19 pandemic.

But the energy the Vanguards bring to the mats won’t be muffled, as evidenced Wednesday night in a 40-14 Ches-Mont League victory over West Chester Rustin.

In search of their second straight Ches-Mont American Division pennant, the Vanguards vaulted to 4-0 on the season. And they did it without the services of one of the top wrestlers in District 1 and the state.

Ryan Catka showed up and helped lead the Vanguards through the warm-ups, as he usually does. Unfortunately, the sculpted 215-pounder who can wrestle up to 285 was forced to settle for a win by forfeit, a drag for sure but life in the fast lane of this pandemic world.

“I did some sprints, then three periods worth of stance and motion,” Catka said through a mask. “And then my cooldown was like 50 burpees and 50 squats.”

Ryan Catka (in hat) talks with teammates during a match against Rustin on Wednesday.

In a few weeks, Catka will be in search of a PIAA Class 3A state medal, which would mark the fourth straight year the Vanguard program has medaled.

Catka took bronze in Hershey last year at 195 pounds and watched older brother Hunter claim his second gold and third overall state medal for the program. That tournament was completed just days before the PIAA shut down sports.

Difficult as the COVID-19 protocols have been for the Vanguards — who hit the mats with 21 wrestlers, roughly half of their typical participation — nothing beats the camaraderie of sharing a victory.

“The one thing that no one is talking about enough when they look at the big picture is the mental health aspect for student athletes,” coach Tom Ellis said. “Students and student athletes, they’re not in school with their friends. Social interaction is limited, at best. Sports might be the only thing they have going for them.”

The Vanguards have key matches ahead against Kennett and Oxford, then a bout with Unionville before the league title is decided.

Then there is the state tournament, which will be much more limited in scope as the PIAA intends to trim what used to be a four-day tournament in Hershey to a one-day event.

A controversial super-regional where wrestlers from District 1 vie with their counterparts in other districts will narrow the field. Tournament-tested wrestlers like Catka can rely on experience in the maze of competitions, but it’s going to be crazy and controversial.

“It’s definitely going to be different with the super-regionals,” Catka said. “It will be new. I think states will be a very small bracket. You have to work your way through and figure it out. I have experience but not the most experience. My freshman year I wasn’t the greatest. My sophomore year I had injuries. My mat time isn’t all there but I feel like I make that up in the room with my effort and stuff.”

There’s a chance Catka could drop to 197 pounds for states. His bronze came at 220.

Despite that, Catka is enjoying his senior season. Young wrestlers gravitate toward him at matches, like a big brother. The irony isn’t lost on Ellis or Catka, who for the previous three years played the role of Hunter’s little brother.

“Ryan is 100 percent his own guy now,” Ellis said. “He doesn’t live in Hunter’s shadow. He’s trying to cast his own shadow. He can 100 percent be a state champion. Unbelievable work ethic. He’s built right, he eats right, he does all the thing you ask. And it also helps that he’s the No. 1 215-pound wrestler in the state.

“I have Ryan run our guys through pre-match workouts. He’s a wealth of knowledge. I learn stuff from him. Great leader by example. There’s no one better to look to.”

Towering above his teammates, Catka looks like he’s holding court during matches. He tries to be a resource, giving teammates “pointers and stuff, what I see in their matches.”

Occasionally Catka will get an inquiry about the Naval Academy, which awarded him a wrestling scholarship. Catka had an opportunity to join his older brother at Virginia Tech, but was sold on Annapolis.

“I’m really excited about that, to be a part of that program and grow with it,” Catka said. “It’s beautiful. I didn’t have a chance to have an official visit. When the coach started talking to me and I started talking to them I was in love with it. Especially with Cary Kolat, the new head coach, and seeing what he’s done for different college programs and how he motivates the guys. It’s me. I like discipline, I like it orderly. I don’t really like partying or staying out late at nights especially when you’re trying to keep up during wrestling season. I’m really looking forward to that and becoming an officer after graduation. I think it’s going to make me a better man and a better wrestler.”

Catka was one of three matches won by Sun Valley in forfeits, part of a 34-0 start to the match that put the result beyond doubt. Timothy Kearney scored a decision at 106 pounds, Shane Holefelter added a major decision at 126 and 132-pounder David Voshel scored a pin in 20 seconds to lead the opening run, punctuated by Ryan Davis’s 9-8 decision at 138.

Matthew Ricci won by decision at 120 pounds and Christopher Wood won by technical fall, 17-3, at 145.

Anthony Volpe posted a 12-0 major decision in the 106-pound match for the Cougars. Matthew Klein won by fall at 145.

Eli Harvey (172) recorded a decision for the Eagles.