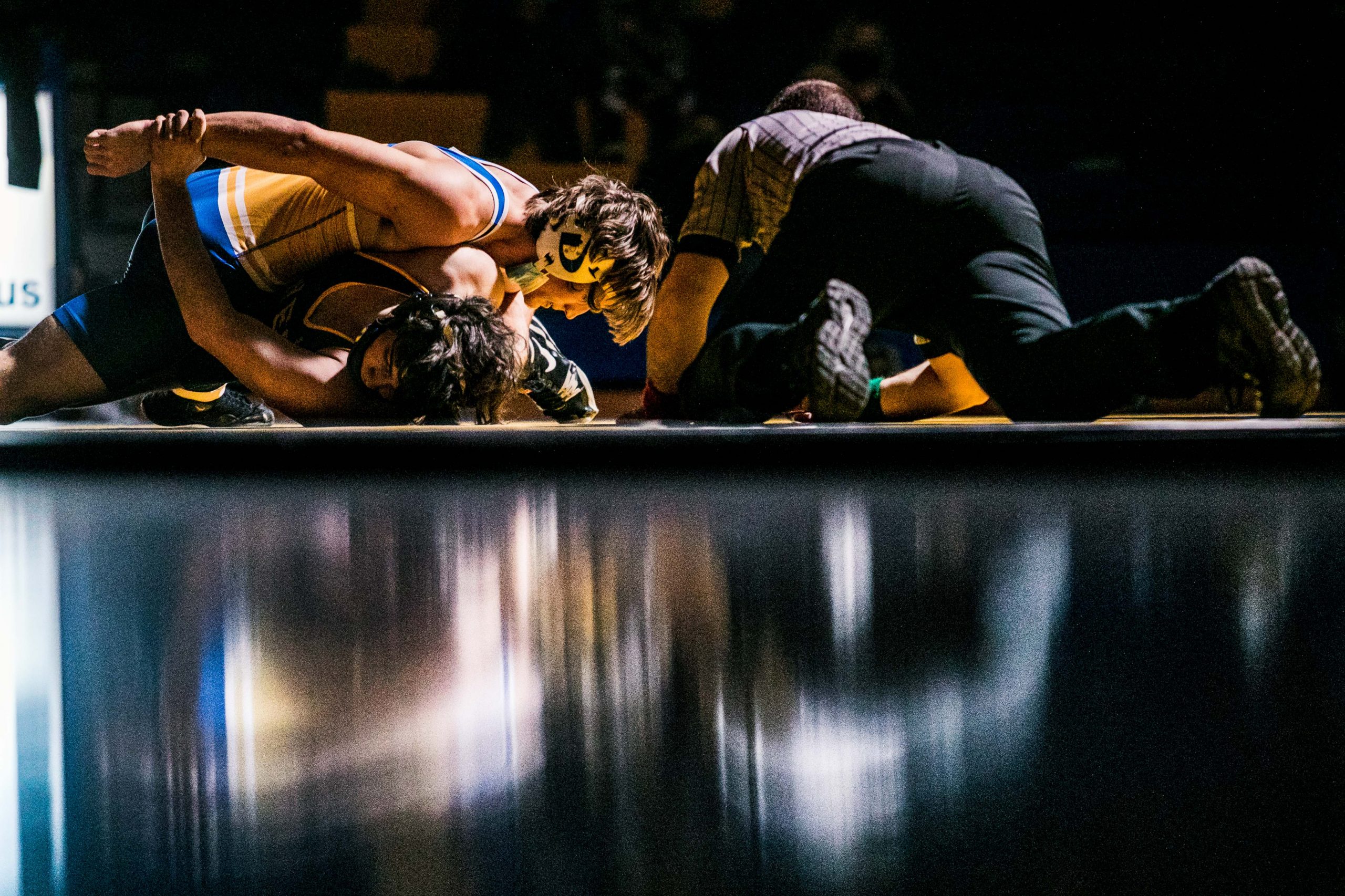 DOWNINGTOWN >> The lone overhead spotlight that illuminates only the wrestling mat in the Downingtown West gym admittedly tweaked the psyche of Downingtown East star, Bo Horvath.

Where Horvath’s bout lined up in a tightly-contested dual meet against the rival Whippets made the light seem even brighter.

Down seven, in the penultimate match of the night, Horvath’s result would sway the outcome one way or the other, and for the talented three-sport sophomore, that just added to the angst he shoulders with his father, Joe Horvath, the head coach of the Cougars.

While things got iffy for a hot second, when West’s Ryan Gallagher took Bo to his back for a two count, Bo, who also plays football and lacrosse, staved off the upset attempt and hung on for a major decision at 160 pounds.

After a bit of a weigh-in snafu by West, there were no Whippets left to send out at 172, so East accepted the forfeit and claimed the Ches-Mont National Division win, 31-28.

Bo moved to 5-0 on the season, with bonus points in each match, pushing his career record to 35-9, and for Joe, it’s about finding that sweet spot in the father-coach dynamic.

“It’s difficult,” Joe Horvath said. “A lot of the time I want to sit back and just watch, but as the head coach, I can’t do that. I try to meet him halfway, do a little coaching, do a little spectating.”

The Cougars won six of the 13 bouts, Thursday, but Manuel, Loraw and Romanelli pinned, and Paxson Warnock (106) added a decision in a dual that saw the lead change six times.

“Where we have experience, we look to capitalize and capitalize big,” Joe Horvath said. “We need to work on the less-experienced guys, putting together a whole match, fighting for points and staying in six minutes. We’ll continue to work on that.”

West built its lead with some of its lesser-known names stepping up. Freshmen Kevin Bernhard (113), Jordan Barry (126) and Ben Hinrichsen (145) picked up victories, and Dom Findora (132) pinned to put the Whippets in position to win.

At 160, West sent out Freddie Bivens, but the East staff was quick to realize he had weighed in at 147, making him ineligible to bump up two weight classes.

“I always tell the kids, pay attention to the details, and that’s how we won,” Joe Horvath said. “That’s one thing you can control.”

The Whippets’ lack of depth up top hurt them in the end. Mason Hale, who plans to wrestle at 172 for the postseason, competed at 215 and held on for a one-point decision against Wileczek. Matt Micale was light enough to make 215, but he wrestled 285, and he nearly had Adam Abouraya pinned as the final buzzer sounded.

Later, Dan Lilley (152) burst out of the gates with a quick takedown, but East’s Connor Huntoon was able to hold him to a decision, leaving West to dwell on the points left on the mat.

“The younger guys did a great job,” West coach Brad Breese said. “We’re freshmen all the way up to 126, and that’s exciting. The kids are wrestling well and I was happy with what we saw there. Some of the older guys needed to follow suit.”

For East, on the other hand, the youthful Bo Horvath came through for the senior Horvath and the rest of the Cougars. It got a little fuzzy at the end, but that’s just par for the course.

“It’s fun, but very nerve-racking,” said Joe Horvath, on watching Bo. “I could probably think of other things to do in life, but this is where I fell and I want to do the best job I can as a coach and as a dad.”