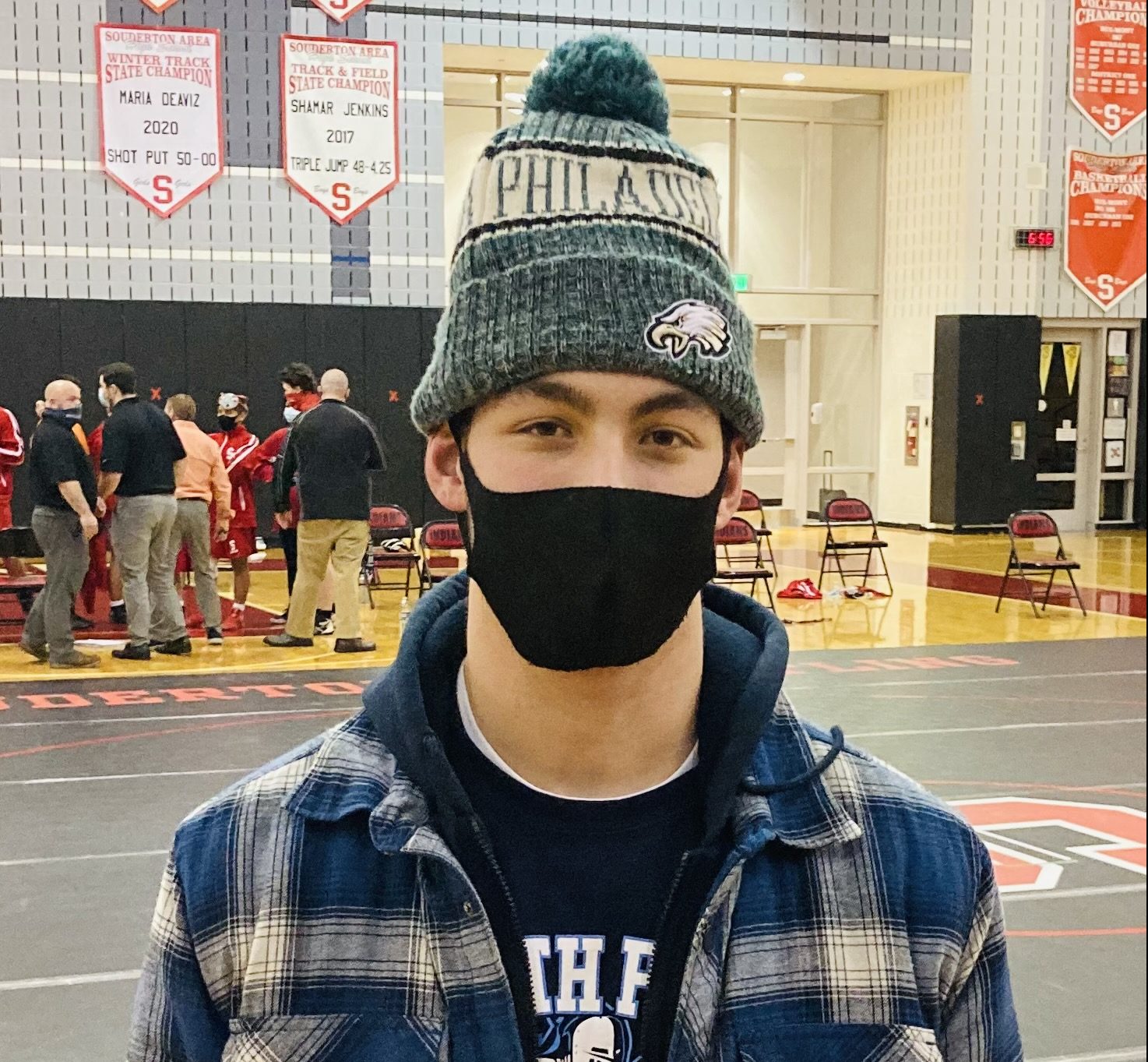 Ben Sanfelice had one of six North Penn pins in the win over Souderton on Wednesday, Feb. 3, 2021. Kev Hunter/MediaNews Group)

FRANCONIA >> Pinning down the Suburban One League Colonial Division title with a 57-18 victory over Souderton, the Knights took what they hope is the first collective step towards a prosperous postseason.

“It’s a big win. We’ve been working hard all season and with everything that’s been going on (with the pandemic), I feel like now we’re starting to hit our stride,” said the Knights’ 189-pounder, Ben Sanfelice. “Practices have been good and hopefully we can keep it up.”

Sanfelice had one of six North Penn pins in the victory, which raised the Knights’ division record to a perfect 5-0. The Suburban One League Championships will be held Feb. 13 at North Penn, starting at 9:30 a.m.

North Penn, as a whole, looked ready for the next challenge. The Knights were dominant in the upper weights and pulled away after leading 27-18 after the 152-pound match.

Sanfelice was part of that surge, as he pinned Big Red’s Kole Lester in 1 minute, 49 seconds at 189.

“It felt good to get the win, help the team win the division,” Sanfelice said. “I was just looking to put out the best performance I could tonight.”

“I’m very pleased with our boys,” Knights coach Robert Shettsline said. “They came together this year and it’s nice to win the title.

“We still have to improve. We’re looking at the postseason and we’re trying to get better, refining and tuning up our wrestling and technique. And we told the kids, they gotta step it up. We’re coming into the postseason so they have to rise to that occasion, step it up another level. We just want these kids to keep improving and we’re gonna help them attain their goals.”

LAYING THE FOUNDATION >> Souderton’s (1-4) young roster had its moments, including a pin by Emerson Goering at 145 pounds.

“We have a really young team so at this point in time, we recognize that sometimes we’re gonna match up against some better kids and some better teams,” Big Red coach Tristan Boyd said. “So the message to the kids is to be aggressive and do our best to execute basics.

“We have a really good group of freshmen right now. We have four freshmen in the lineup who are working hard, getting better, and we have more kids coming up from the middle school who can really improve the lineup. And for some of our upperclassmen, when you compare how they were to last year, they’re fighting harder and they’re in better position, so we’re growing.”