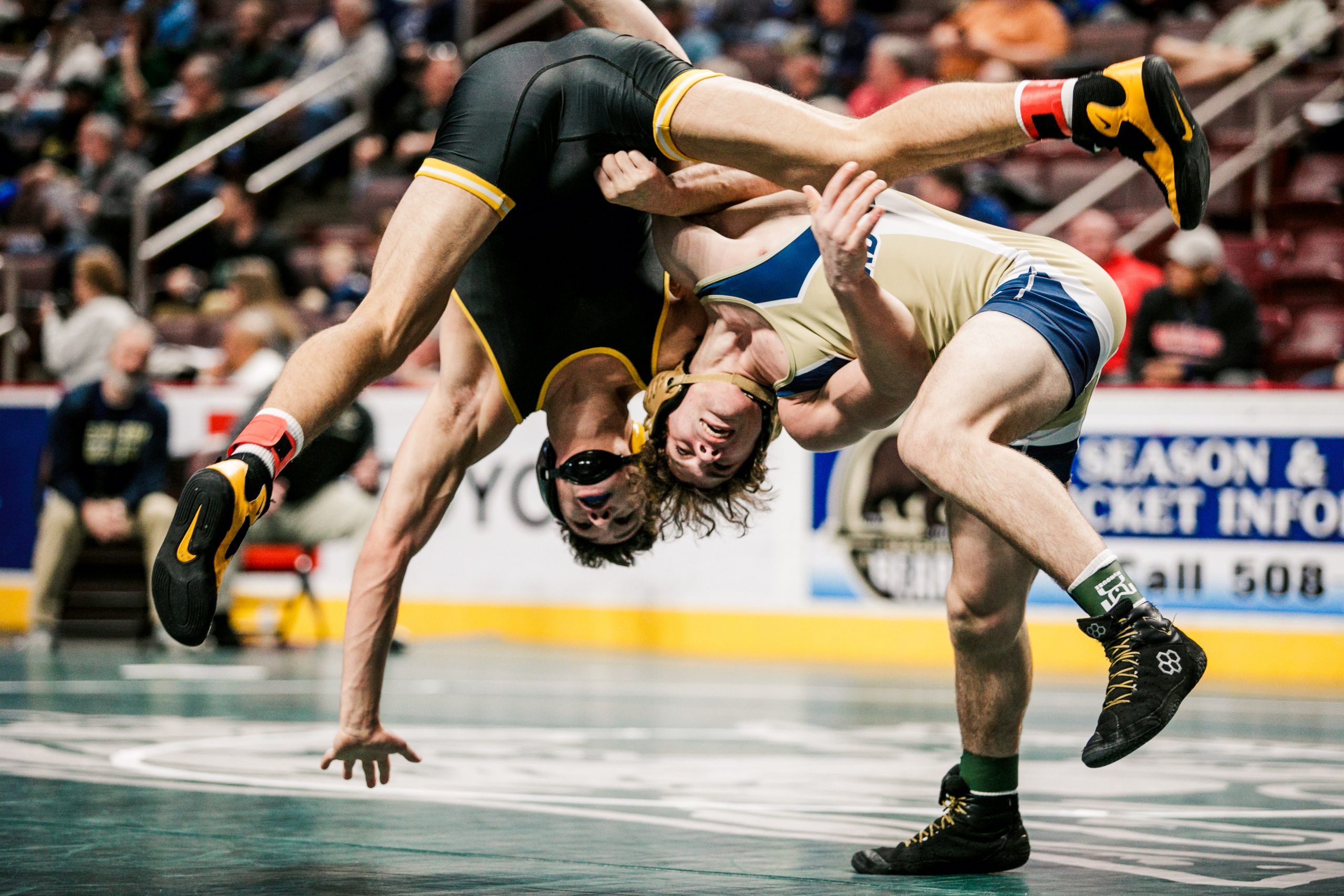 HERSHEY >> They ran a gamut of emotions Friday.

It was the lows of either being knocked out of the championship bracket or having seasons come to an end, and the highs of surviving the dreaded “blood round” to stay in contention for medals. In the end, several area wrestlers left the Giant Center happy in the knowledge their postseasons will resume Saturday.

The five qualifiers — Antonio Petrucelli and Connor Quinn from Owen J. Roberts, as well as Louie Carbajal, Jack McGill and Joey Milano from Spring-Ford — remain from the original 15-man local contingent that came to Hershey seeking gold from the PIAA Class AAA tournament.

“This accomplishment is something I’ve dreamed of all year,” Carbajal, a first-time participant in Pennsylvania’s individual competition, said after completing his qualification in the 195-pound bracket. “I knew if I advanced little by little, I could be on the podium.”

For Petrucelli, getting through Friday’s sessions came with an additional reward. The Roberts senior (39-5), dropped into wrestlebacks with a first-round loss Thursday, became his program’s all-time win leader with his decisions of Mifflin County’s Ethan Kauffman (5-0) and Bensalem’s Connor Eck (9-2).

He surpassed Derek Gulotta (Class of 2015) and his 147 victories, opening the possibility he can hit a 150-win mark only 15 other grapplers from The Mercury coverage area have achieved.

“It was a goal for me,” Petrucelli said, “but I tried to keep it in the back of my mind. I want to take it one match at a time, especially tomorrow.”

For Quinn (32-4), ending his scholastic career with a state medal — that after two previous years of DNP finishes here — is a fitting finale to his three seasons at Owen J. Taking a page from Petrucelli’s game plan, he’s not getting ahead of himself in his stretch run.

“I’m trying to be level-headed, not giving it too much thought,” he said.

Quinn was handled in the quarters by Waynesburg’s Luca Augustine but navigated his way to Saturday.

“Obviously, there was more pressure,” Quinn said about being in the consolation bracket. “But it you wrestle being afraid to lose, you’re not going to do well.”

The area’s four wrestlers starting in the championship bracket Friday were all dropped into consolations through quarterfinal-round losses. Few faced a formidable opponent like Spring-Ford’s Joey Milano.

The Ram junior (45-2) found his path to a 182-pound gold medal blocked by Gerrit Nijenhuis, a senior from Canon-McMillan whose credentials feature the AAA 170-pound championship last year, alongside a 43-0 record and South West AAA Regional title coming to Hershey. Nijenhuis reinforced his formidable posture by dealing Milano a 7-1 loss. Nijenhuis held a slim 2-0 lead after one period, but he bolstered it with a bottom-start escape and subsequent takedown in the second. He added another pair of points in the third while Milano mustered only an escape in that span.

Milano got to Saturday by being named winner of his third-round consi with Bellefonte’s Ethan Rossman. With the bout tied 1-1 4:40 in, Rossman was judged to be suffering a concussion and done by injury default.

Spring-Ford’s Jack McGill passes out low fives after winning in the 152-pound blood round to earn a medal. (Nate Heckenberger – For MediaNews Group)

McGill (44-8) found himself dropped into wrestlebacks after an overtime loss in his first bout at 152. He responded with consi victories over Penn Manor’s Colt Barley (6-3), North Allegheny’s Grant MacKay (3-2) and Gettysburg’s Luke Sainato (8-3).

Carbajal (30-13) assured himself of ending his scholastic career with a state medal after edging Hazleton Area’s Seth Hunsinger, 3-2. He had a similar result in his opener against Bellefonte’s Tyler Benner, but was handled by Cumberland Valley’s Jacob Lucas in quarters, 9-3.

“I defended well,” Carbajal said of his third-round consi with Hunsinger. “He couldn’t get off shots.

“When I lost in the quarters, I knew it was a case of who had the bigger heart.”
—
For the other five area wrestlers making it to Friday, the end came in the “blood round” for most.

Boyertown’s Julien Maldonado came to the Giant Center Friday off a 5-0 win over Upper Darby’s Keito Shaw that was the 99th of his scholastic career. But his junior season ended with a pair of losses to Cedar Cliff’s Aiden Lewis and Cumberland Valley’s Ben Monn.

A second period escape from a bottom start was the difference for Lewis in a 1-0 quarterfinal win. Monn then ended Maldonado’s run for triple-digit fame in 2020 with 7-0 decision in their second-round consi.

Spring-Ford’s Quinn Tobin scored a narrow 1-0 win over Strath Haven’s Chase Barlow in their second-round consi. It was a rematch from last weekend’s South East AAA Regional, Barlow scoring 4-0 victory in their consi-semi.

Tobin (42-12) saw his first trip to Hershey for the individual tourney ended in a 3-1 overtime loss to Red Land’s Bryce Brennan.

Methacton’s Kibwe McNair started Friday by rolling up a 10-0 major decision on State College’s Clayton Leidy. He was then blanked by Nazareth’s Dashawn Farber, 5-0, to finish his senior season 30-3.

Owen J. Roberts’ Austin Boaman, a first-time qualifier for the state’s individual competition. was handled by Angel Garcia of Mariana Bracetti Ac., 11-4, in the third round of consolations. Boaman (33-12) went 2-2 in the 170-pound bracket.

Daniel Boone’s J.T. Hogan saw his latest Hershey experience end in a 3-0 loss to Council Rock North’s Sam Hayes in the 145 consis. The Blazer sophomore finished his season with a 39-6 record.

NOTES
The Class AAA field will be back at the Giant Center 9 a.m. Saturday for semifinals and fourth-round consolations, followed by fifth-round consis at 11:30 a.m. Medal matches will go off 7 p.m. … The Class AA medal matches are scheduled for 2 p.m.