No. 3 Spring-Ford, No. 5 Owen J. Roberts cruise in first round of District 1-3A Duals 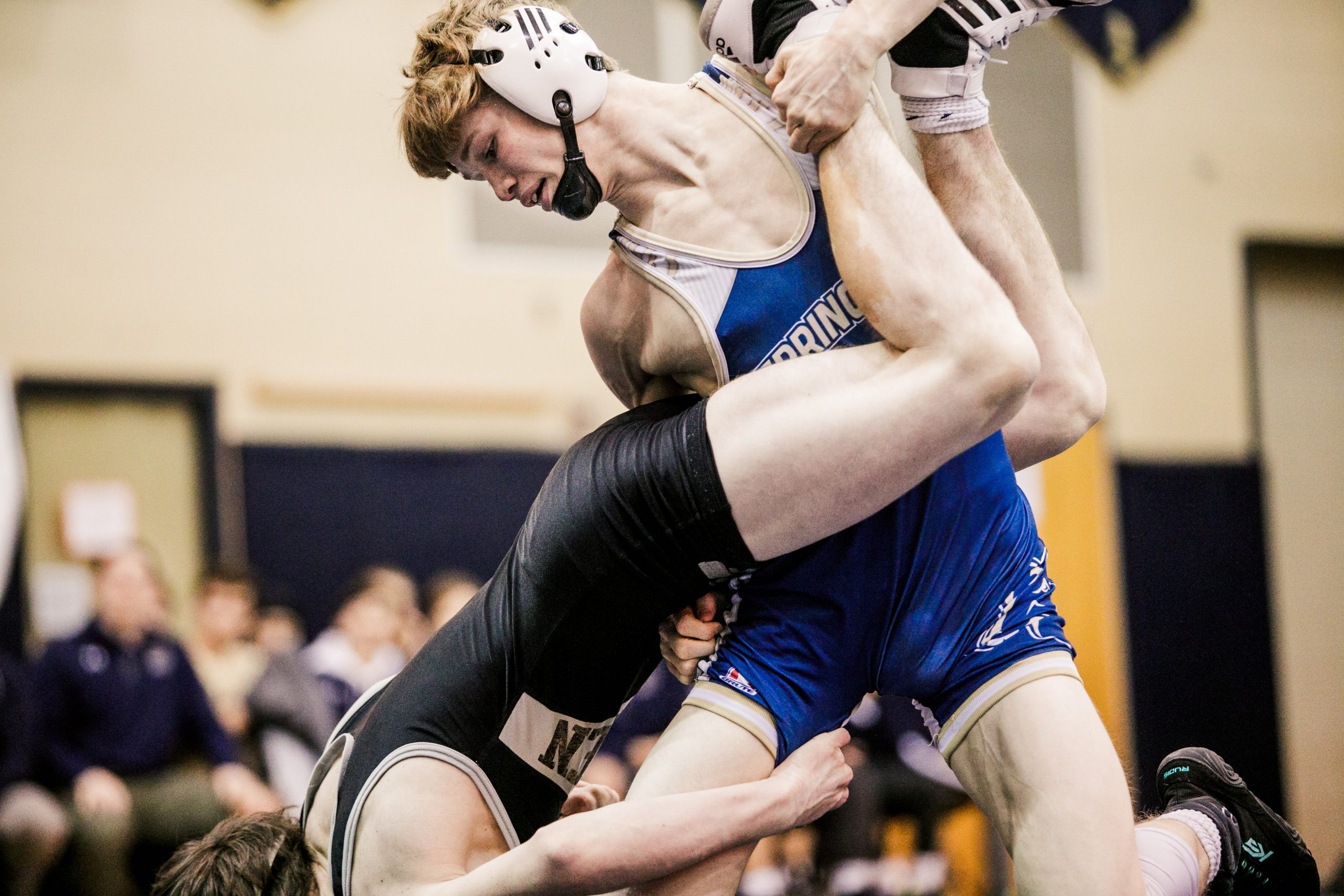 Spring-Ford's Zach Needles tries to finish a takedown against Strath Haven's Chase Barlow in a 7-5 win at 138 pounds. (Nate Heckenberger - For MediaNews Group)

WESTTOWN >> A day after a tightly-contested dual meet between the Pioneer Athletic Conference’s top two teams, Spring-Ford and Owen J. Roberts, first round mismatches in the District 1-3A Duals may have seemed like potential yawners.

But the Rams and Wildcats have been doing this long enough, taking care of business and plodding forward to their ultimate goals.
Thursday, at West Chester Rustin, No. 3 Spring-Ford dismantled No. 14 Strath Haven, 66-3, while No. 5 Owen J. Roberts burst by No. 12 Downingtown West, 47-34, to advance to the quarterfinals next Friday at Upper Dublin.

The Rams have now won their 10th straight opening-round dual in this tournament, while OJR’s streak is at 11, dating back to 2010.

“As coaches, we don’t often step back and reflect on what our kids have done,” DeRafelo said. “It never gets old because it’s a new group of kids. They’re excited for it and they put a lot of work into it, but that itself doesn’t do anything. They have to come out and wrestle.”

The night prior, Spring-Ford (11-1) toppled Owen J. (13-2) by seven, and kept its momentum by rolling a Strath Haven team making its debut in district duals. The Rams won the first 10 bouts, six by fall, to cruise to the quarterfinals, where they’ll face No. 6 West Chester Henderson.

“We looked at (Strath Haven’s) lineup and they have some quality kids,” Spring-Ford coach Tim Seislove said. “(Head coach Anthony Gilliano) has done a good job with the program and we came out focused on wrestling hard and taking care of business.”

There was not much drama to be found, except in back-to-back bouts at 138 and 145 pounds.

Zach Needles (138) took out Strath Haven’s returning state qualifier, Chase Barlow, 7-5, in the marquee matchup of the night. Alex Johns (145) followed with a 3-2 win over Charlie Dawes, using a tilt late in the third to earn the win.

For Needles, who’s now 21-3 on the season, it was all about keeping a level head.

“I get excited and almost psych myself out a little bit,” Needles said. “I just had to calm down and remember he’s just a kid, like me.”

Though OJR’s score was a little closer, there was never a doubt for the Wildcats, who clinched the contest after just eight bouts.

The Wildcats won seven of the first eight matches, pinning in each of them. West, who’s strength is at the back end of the lineup, got its points to close it out.

“They’re so tough up top with some absolute studs, we knew we had to score a lot of points before we got there,” DeRafelo said.

One of the pinners for OJR was Connor Quinn, who returned from an injury Wednesday after missing almost three weeks. He appears to be just fine now, with a technical fall and pin his first two matches back, and now hopes to help his team make a run to the PIAA Duals.

“We’re looking for the same results,” Quinn said. “They’ll be tougher matches, but as long as we believe it, we can achieve anything, so we’re gonna go out and do what we do.”

The Wildcats may have caught a break with No. 13 Garnet Valley upsetting No. 4 Council Rock North, 33-32. The Jaguars and Wildcats have some history in district duals, with the Jags upsetting OJR in 2017, but the Wildcats will happily proceed without North in the way after splitting a pair of duals with the Indians this season.

“It’s really exciting,” DeRafelo said. “It’s gonna come down to who’s healthy. That’ll be a big part of it, and the coin toss could loom big. I think it’s really close and there are six teams who are really solid and could be in the mix. I think it’s great for the fans and for the sport. I can’t remember a time it was this competitive with as many teams capable of winning.”

Spring-Ford has finished runner-up the past two seasons, and though his team is one of the most balanced teams in the district, Seislove knows this tournament can be unpredictable.

“It’s gonna be tough,” Seislove said. “The top eight are all good and I think it’s gonna be a wild weekend. We’re just fortunate to be there.”