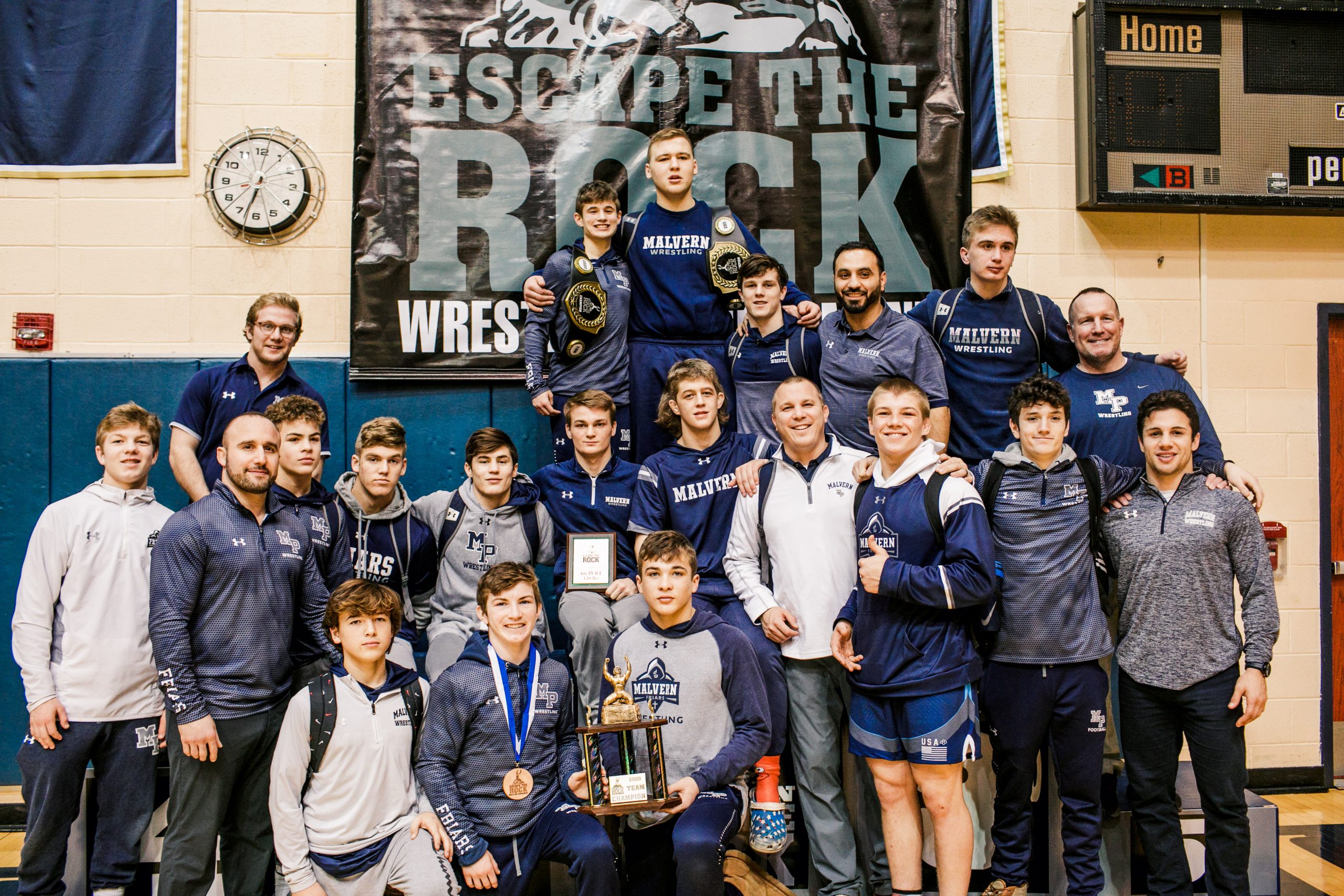 But winning the Escape the Rock tournament, Sunday, and capturing his 100th career win in the process was grand enough to negate any disappointment of a low-scoring decision.

“That’s not the way I wanted to win, but the kid was tough, so, much respect to him,” said Deery, who edged St. Joseph Regional’s Jim Mullen for the title. “I figured out earlier in the week that I could win my 100th match in the finals, and that’s what I did, and a lot of work went into it.”

Malvern Prep’s Cole Deery ties up with St. Joseph Regional’s Jim Mullen in a 1-0 win in the 285-pound final. It was Deery’s 100th career victory. (Nate Heckenberger – For MediaNews Group)

Deery was joined by freshman Tommy Link (106 pounds) as champion for Malvern, who ran away with the team title. Eight Friars placed in the two-day tournament at Council Rock South.

After winning 66 matches and an eighth-place state medal in two seasons at Garnet Valley, Deery is 34-1 in his first season at Malvern. With championships at the Walsh Ironman and Powerade tournaments, Deery added another major title to a very successful junior year.

“I have really great practice partners,” Deery said. “I like rolling around with the lighter guys. They make me wrestle like a lightweight. I’ve always wrestled like a lightweight, but I’ve learned to hand fight and that’s helped me become the wrestler I am today.”

With the championship round starting at 132, Link followed Deery to give Malvern back-to-back champs. Trailing late against Delaware Valley’s Zach Jacaruso, Link managed a reversal with 10 seconds left to prevail, 5-4.

“It’s pretty surreal,” said Link, who was the No. 4 seed. “I’ve been through a lot of eighth-places at Ironman and Beast, so to come out here and pin the No. 1 seed and beat the No. 2 seed in the finals, it’s pretty cool.”

Malvern Prep’s Tommy Link points at his coaches after a last-second, 5-4, win over Delaware Valley’s Zach Jacaruso in the 106-pound final. (Nate Heckenberger – For MediaNews Group)

Sophomore Nick Feldman (195) reached the finals, as well, but gave up a late takedown to Southern Columbia’s Gage Garcia and fell, 3-2. Garcia is a returning Class AA state champ, and is planning on playing football and wrestling at the University of Michigan.

“Gage is a great wrestler and I wasn’t getting to my stuff in the finals,” Feldman said. “I just gotta get over the cusp of taking second in these tournaments.”

Malvern Prep’s Nick Feldman looks for a place to score against Southern Columbia’s Gage Garcia in a 3-2 loss in the 195-pound finals. (Nate Heckenberger – For MediaNews Group)

West Chester Henderson only had two medalists, but Killian Delaney (120) and Sammy McMonagle (126) made the most of their tournaments.

Delaney roared back from a loss in the quarterfinals, with four wins, Sunday. He opened the day with a major decision against Chambersburg’s returning third-place state medalist, Karl Shindledecker. After a pin got him to the consolation semifinals, Delaney shut out St. Joseph Regional’s Alex Almeyda, who was ranked No. 7 in the country on intermatwrestle.com.

For his grand finale, Delaney avenged a loss to DelViscio the night before with an 8-2 decision for third.

McMonagle, who started the tournament seeded 10th, finished fourth after a 4-2 loss to Cincinnati LaSalle’s third-seed Cole Skinner. During the tournament, McMonagle wrestled five of the other seven medalists, and beat four of them.

“I thought they wrestled razor-sharp, (Sunday),” Henderson coach Rob Beighley said. “After they lost in the quarters, what I’m most proud of is, the way they responded. They came in guns blazing and both beat nationally ranked guys. I couldn’t be more proud of the way they wrestled.”

Downingtown West had four wrestlers compete, Sunday, and three found their way to the podium, resulting in a 21st-place finish as a team.

Third-seeded Max Hale (182) climbed the highest, finishing third. After a late takedown by Spring-Ford’s Joey Milano bumped Hale, 4-3, in the semifinals, Hale wrestled back and won two in a row to finish third.

Downingtown Wests’ Max Hale picks up near-fall points against Easton’s Isaiah Reinert on his way to a major decision in the 182-pound consolation semifinals. (Nate Heckenberger – For MediaNews Group)

Chase Mielnik (195) started his day in the semis, too, but ran into Feldman. After a loss in the consi semis, No. 3 Mielnik responded with a major decision against Notre Dame Green Pond’s Jason Sine for fifth place.

Matt Micale (285) won his first two of the day before losing his final two, but finished where he was seeded, sixth.

“I think we wrestled pretty well for the most part,” West coach Brad Breese said. “We came and did what I was hoping for and battled. Our guys wrestled close to their seeds. I think a lot of people around the area thought that Matt’s seed was pretty high for him, but I think it was an excellent job by him getting to the podium.”