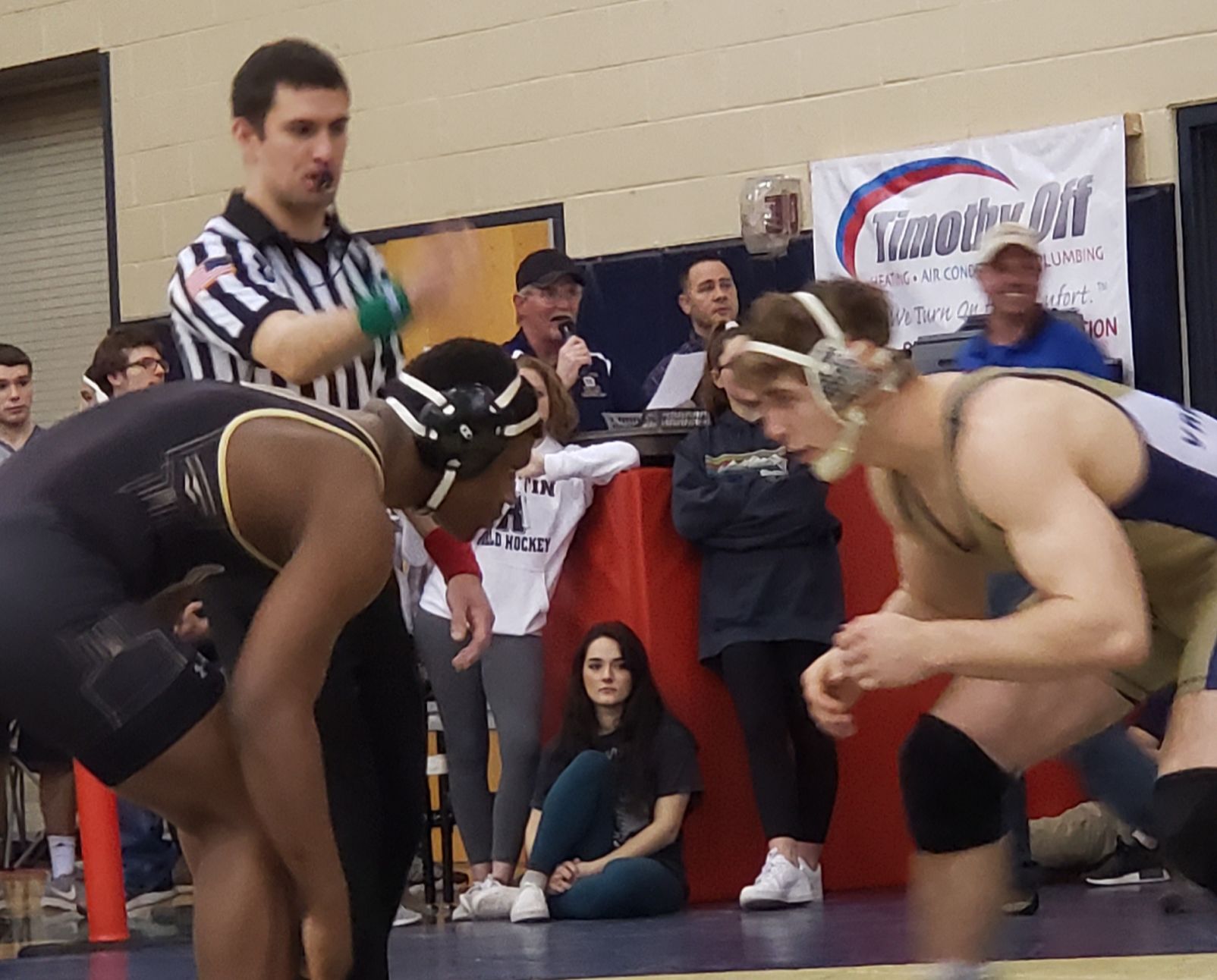 Terrance Averett of Glen Mills, left and defending 3A state champ Hunter Catka from Sun Valley battle at the District 1 West tournament last weekend at West Chester Rustin. Catka is the top seed at 220 pounds in the Southeast Regional this weekend at Souderton.

The thrill of victory and the agony of defeat are the obvious components in Class 3A Southeast wrestling regions, which this year are Friday and Saturday at Souderton High School.

Between those extremes the competition is fraught with drama. Even in recent times there’s been enough twists and turns for Delaware County wrestlers to supply any takedown junky with a lifetime of stories.

It was only a year ago when a winter storm wiped out the Friday round of the Southeast region at Oxford. With limits on the number of bouts wrestlers could participate in, the competition wasn’t completed in various weight classifications until Sunday.

“That was pretty crazy,” said Rocco Fantazzi, the coach of Central League champion Garnet Valley. “Guys were wrestling to qualify for the states in an empty gym on Sunday morning. The biggest match of your life and it’s you and the coach and the custodian in the bleachers.”

Lee Holbert (Strath Haven) and Tommy Bramwell (Ridley) did just that last year, Holbert prevailing at 285 pounds in front of the empty stands to pull down the fifth and final berth in states.

Bramwell is back this year, the big senior is seeded second in his weight class. There’s no indication of another Sunday match, at least according to the weather report.

Three years ago, 220-pounder Joshua Yeboah-Gyasi of Upper Darby cruised into the Southeast regional final against Boyertown’s Jordan Wood, the eventual state champ. Eyewitnesses swear that Wood body-slammed his opponent, which would be a disqualification.

Instead, Wood won by injury default, which protected his seed at the state tournament, and Yeboah-Gyasi was unable to compete in states due to a concussion.

Bob Martin, who has won over 400 matches at Upper Darby, always will wonder how much Wood’s national reputation played into the ruling.

“There’s no question it was a slam, in my opinion,” Martin said. “I don’t think Josh would have beaten him. (Wood) was a better wrestler. But what that did was deny Josh an opportunity to medal in the states. I said to Josh, ‘look, you qualified, and I want you to come to states.’ It was hard for him. You get into would have, could have and should have. Sometimes that’s life.”

The flip side of the regions is the top five wrestlers in each weight class in the double-elimination competition make the state tournament in Hershey. Injuries, illness and lucky breaks all factor into matches.

Last year Coltin Deery of Garnet Valley finished fifth in the districts and didn’t qualify for the regions at 220 pounds. It’s a good thing he brought his gear, for he was thrust into service when another wrestler was unable to go due to injury. Deery didn’t reach the states but finished 2-2 in regions. It’s not a coincidence he enters the competition this weekend as the second-ranked 285-pound wrestler in District 1. Every little bit helps.

“He got a chance to wrestle and he did something with it,” Fantazzi said. “And that’s pretty crazy, showing up and someone says ‘hey, you’re wrestling.’ He got more matches, he got experience in the regions and that definitely was huge for him. Stuff like that happens. Stuff like upsets in early rounds. Guys coming from out of nowhere and upsetting the big-name guys.”

Last year Hunter Catka, in his sophomore year at Sun Valley, aced the regions and was a runaway freight train in states, hauling in the gold medal at 220 pounds. Though Catka is rounding back into shape after a broken leg, he’s the top-ranked 220-pounder in District 1.

Two years ago, also at Souderton, the featured bout was at 220 pounds, where Brian Kennerly of Upper Darby and Joe Doyle of Council Rock South squared off. Kennerly rallied for a 3-2 victory and went on to win the state title. Doyle was third at states, losing only to Ian Edenfield (Laurel Gardens), who Kennerly defeated in the championship bout.

“Brian had some great matches,” Martin said. “There’s nothing like going to states. I still get excited when a kid qualifies. When you get to Hershey and they play the Star-Spangled Banner, you still get that feeling of ‘wow.’ The Pennsylvania states are by far, the best. I tell people you can be a national prep champ. It’s great. But to say you’re a Pennsylvania state champion means more to me.”

Garnet Valley won the District 1 West team competition last week despite not having a champion in any weight classification. Deery and Austin Filippone (160) both finished second. Five other Jaguars qualified for regions.

“Every tournament is a new tournament,” Fantazzi said. “It doesn’t matter where you’ve placed. It’s a new week and your goal is to advance and get through. Our chances are as good as anybody. We’re comfortable with the underdog role. None of our guys other than Colt is ranked in the district. None of our guys are being considered as the guy you have to watch out for in the bracket. We’ll take that and we’ll run with it because we also know that our guys aren’t afraid to wrestle anybody. They’ve wrestled the best and they’re comfortable where they are.”

Comfort, on the other hand, typically is in short supply in the Class 3A Southeast Region championships.