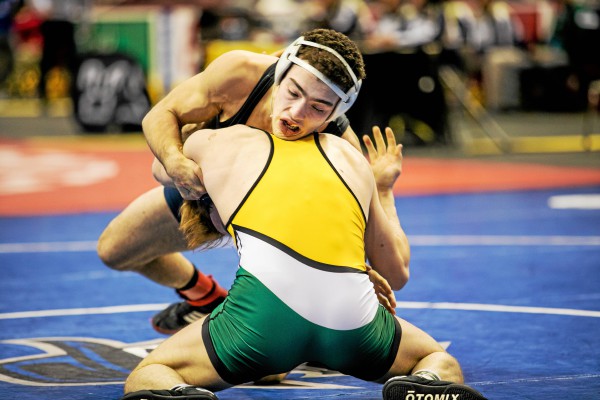 Through his own performance, and in tandem with his younger brother.

What happened Saturday was all Ryan Vulakh. The Golden Panther junior led the Pioneer Athletic Conference’s surviving contingent at the PIAA Championships with the highest medal finish among its four finalists.

Vulakh became the PJP program’s highest-placing grappler all time with a third-place finish in Class AAA’s 145-pound bracket. That was in addition to being its first competitor to clinch a AAA medal and, with brother Matt Vulakh, the first to reach the state tournament in the big-school field.

That was all in complement to the Vulakhs’ becoming PAC tournament and District 1-AAA titlists, and Ryan winning South East AAA Region gold last weekend.

“We could do well everywhere,” Ryan said. “You just have to be able to put 150 percent out.”

Vulakh’s 5-0 decision of Northern York’s Micah Hoffman was secured by a second-period point flurry consisting of an escape from a bottom start, an escape and two back points. His finish put the PJP junior ahead of Boyertown’s Elijah Jones and Owen J. Roberts’ Daniel Mancini — they were fourth in their respective 195 and 152 brackets — and brother Matt, eighth at 106.

It completed a successful rebound from an 11-1 semifinal-round loss to Nazareth’s Sammy Sasso, one that featured a 1-0 edge of Penn Trafford’s Jobe Chisko to secure a berth in the third-place bout.

“If he’s not the toughest,” Vulakh said of Sasso, who went on to win the Class AAA Outstanding Wrestler Award, “he’s one of them. The score speaks for itself.”

Vulakh closed out his year with a 31-5 record and prior gold medals at the Pioneer Athletic Conference, District 1-AAA Central and South East AAA Regional tournaments.

Jones closed out his storied career in the Bear mat program with a higher medal finish than the fifth he scored last year. He rallied from a 5-1 deficit after two periods by scoring a pair of takedowns while Northern York’s Jake Koser had just two escapes. But he couldn’t score a tying takedown that could have given him added life in overtime of their 195-pound clash.

“Koser’s a tough opponent,” he noted. “We have similar styles.”

Jones bounced back from Friday’s quarterfinal-round loss to Clearfield’s Luke McGonigal with a vengeance Saturday. He pinned William Tennent’s Yusuf Aladinov in 2:04, then posted a 3-1 decision of Connellsville’s Nate Ansell.

“I had a good tournament,” he said. “There were things I did I wasn’t happy about, but I think I wrestled well the entire tournament.”

Jones’ final season saw him finish with a 43-5 record and gold medals at the league, district and regional levels.

Mancini’s medal bout started off well, the Roberts junior getting out to a 2-0 lead with a first-period takedown. But the tables were turned on him by Hampfield Area’s Luke Kemerer — the opponent he topped in Thursday’s opening round in a 4-2 sudden victory — who titled him in the second period for a pin.

“It happens,” he said. “It was still a fun tournament. I enjoyed it and learned a lot. I want to get back here next year.”

Boyertown’s Elijah Jones ties up with Connellsville’s Nate Ansell during a 3-1 win in the 195-pound consolation semifinals. (Nate Heckenberger – For Digital First Media)

Mancini came on strong in Saturday’s early bouts, scoring a pair of shutouts. He rolled up a 6-0 verdict on Bethlehem Catholic’s Luca Frinzi, then handled West Allegheny’s Ty McGeary 10-0 to put him in position to place third.

“I don’t want to give anybody breathing room,” Mancini said. “I don’t want anyone to score. Bad things can happen when you give up on offense.”

Mancini finished the season with a 42-6 mark. It was a campaign highlighted, in addition to the first-time state medal, by championships in the PAC, district and regional tournaments.

Matt Vulakh’s first trip to states, and first varsity season, ended with an 8-1 loss to Altoona’s Matt Sarbo in the seventh-place medal bout at 106. Vulakh trailed Sarbo the entire time, yielding a takedown in the first period and a reversal in the second in closing out his season at 30-8.

“I thought it was possible,” Matt said of his success this winter. “I worked hard to get here and did my best to place.

Vulakh ended up in the seventh-place contest after being dropped by Bethlehem Liberty’s Tal-Reese Flemming, 7-4, in their fourth-round consi. His season was highlighted by championships in both the PAC and District 1-AAA Central tournaments, and by a runner-up finish in the South East AAA Regional.

“I just want to keep making our team better,” he said. “My brother and I both want to do good.”

NOTES >> PJP’s only other state medalist was 2015 graduate Michael Collins, who was fourth in the AA field. … Nazareth emerged as the AAA team champion.