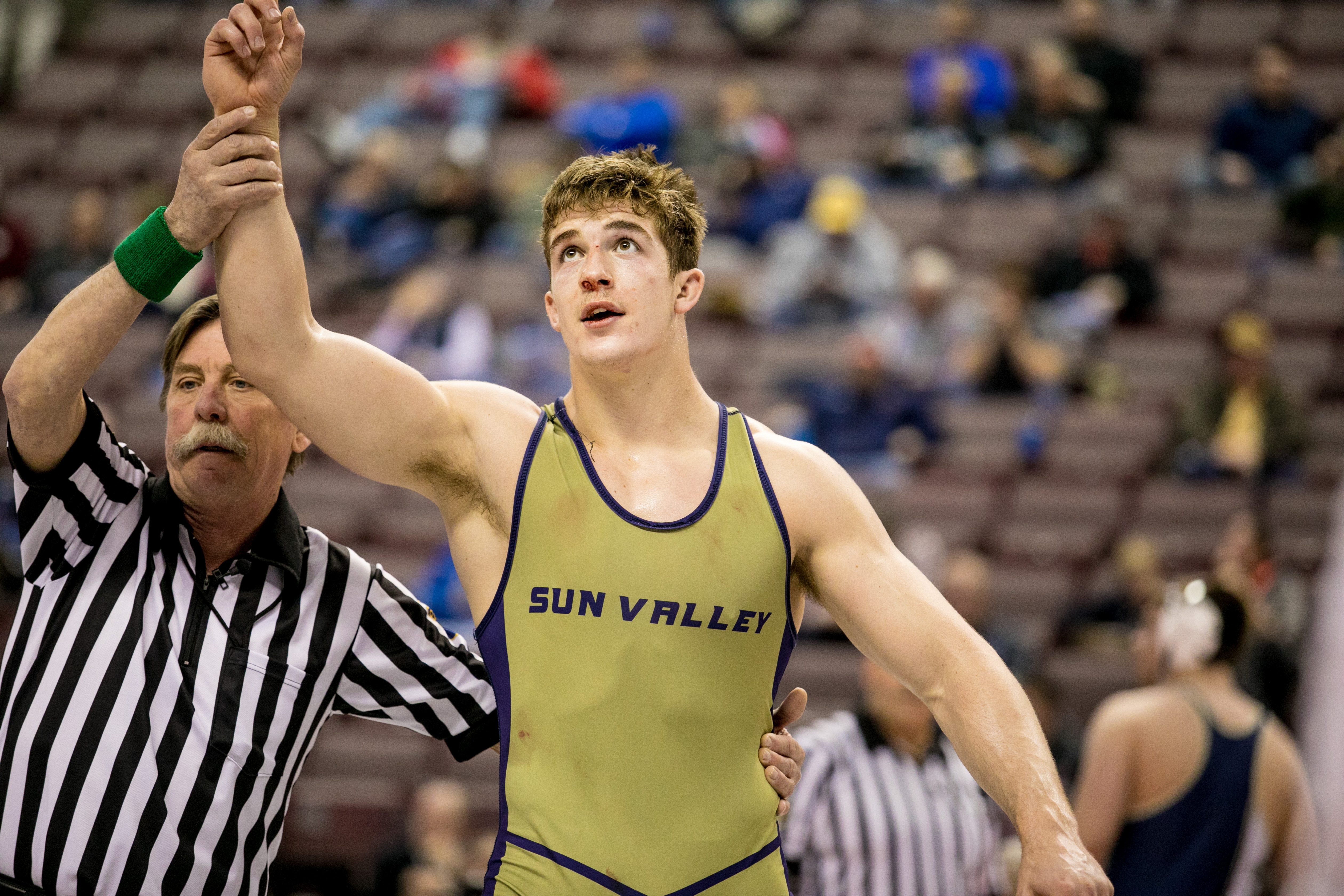 He never trailed in a 7-5 win over Parker McClellan of Altoona at 220 pounds in the PIAA Class 3A tournament at the Giant Center, although the bloody match had a small handful of hairy moments.

Combined with Brian Kennerly’s championship for Upper Darby here last year, also at 220 pounds, it’s the first time Delaware County wrestlers have won titles in consecutive years in the 80-year history of the tournament that began at Rec Hall at Penn State in 1938. Catka (41-1) is just the ninth Delco wrestler to secure gold at states.

Sun Valley’s Hunter Catka works to get around Parker McClellan of Altoona the PIAA Class 3A 220-pound final Saturday. Catka led wire-to-wire in a 7-5 win for the state championship, the first for Sun Valley and the ninth ever for Delco. (For Digital First Media/Nate Heckenberger)

“It feels awesome,” Catka said. “I was really excited. It’s like I keep saying, it’s all God, all the time. And my teammates were here to be with me on the ride. That’s pretty awesome.”

For a few moments Saturday morning, Catka thought the dream was over.

In the semifinal against Ian Edenfield of Laurel Highlands, he got caught on his back. The referee banged his palm on the mat, signaling a pin that sent Edenfield leaping into the air.

Catka was totally outside the circle boundary, Edenfield barely in it when the match was halted for an apparent pin.

But Vanguards coach Tommy Ellis knew better, as he alerted the official who wound up overruling the pin, deciding that Edenfield hadn’t established himself inside the boundary while putting Catka on his back. And you thought the NFL’s catch rule was crazy.

“Yeah, I was scared honestly,” Catka said. “But when I saw the other ref call it off I was like, ‘alright, I’m still in this. Keep going.’ It re-booted me. I was ready to go after that.”

“His toes were inbounds,” Ellis said of Edenfield, “but because of the new rules, toes aren’t considered supporting parts. I saw his knees come up and I yelled right away to the assistant official. The official changed his angle and confirmed with the head official it wasn’t a pin.”

After the officials conferred, Edenfield scored just two points, instead of the three he was initially awarded for a near fall. The scoring changed from a pin to 5-0, and then to 4-0.

Sun Valley’s Hunter Catka returns Laurel Highlands’ Ian Edenfield to the mat in the 220-pound semifinals at the PIAA Class 3A championships Saturday. Edenfield appeared to have a pin early in the match, but it was ruled out of bounds, and Catka recovered for a 6-5 win on the way to the gold medal. (For Digital First Media/Nate Heckenberger)

That was critical because by the end of the first period, Catka was within 4-3. And it was his arm that was raised after a 6-5 success.

“Hunter was down 4-0 in the state semifinal and he didn’t buckle from the pressure,” Ellis said. “It actually made him work harder. We kind of knew at that point, the end of the period, that Edenfield was kind of gassing and he wouldn’t be able to keep up with Hunter’s tempo.”

The win over McClellan (30-6) was almost as entertaining, Catka taking a 4-1 lead and McClellan edging within 4-3. Catka led 7-4 entering the final period. At that point both wrestlers had bloody noses from a series of unintentional but nasty head butts.

With 1:26 left in the match and McClellan in solid position, his nose burst open. There were stoppages to address the bleeding for both competitors the rest of the match.

“I think it’s the nature of the sport,” said Greg Hagel, Catka’s club coach. “The heads are colliding. It happens quite a bit at that weight class. There were some positions where I thought we could have finished a little better off of today but Hunter found a way to make it work. A couple takedowns he got just by staying in good position were huge, which is what he’s done all year.

“I think Hunter showed up here on a journey. He kept his mind focused on all the little pieces we worked on all year. He stay focused. So, I’m really proud of how he executed things under pressure with a lot of people watching and made it work.”

Edenfield tumbled from the semis and a chance to win gold to sixth place. He lost a narrow 3-2 decision to Kennerly in the 220-pound title bout here last year.

Catka used to work out with Kennerly, now at the University of Virginia. Catka, a sophomore who just turned 16, has a couple more years to become the first Delco wrestler to win multiple state titles.

Ellis wrote “STAY GOLD” on his knuckles, a play on the Vanguards’ colors and Catka’s quest. He looked like Doug Pederson after the Super Bowl.

“From where the program was to where we’ve come in six years is completely amazing,” Ellis said. “I’m unbelievably proud of Hunter. But just the whole program, our entire team is here supporting Hunter. It’s a wrestling family. And they supported Hunter, who went out and did something that’s never been done.”