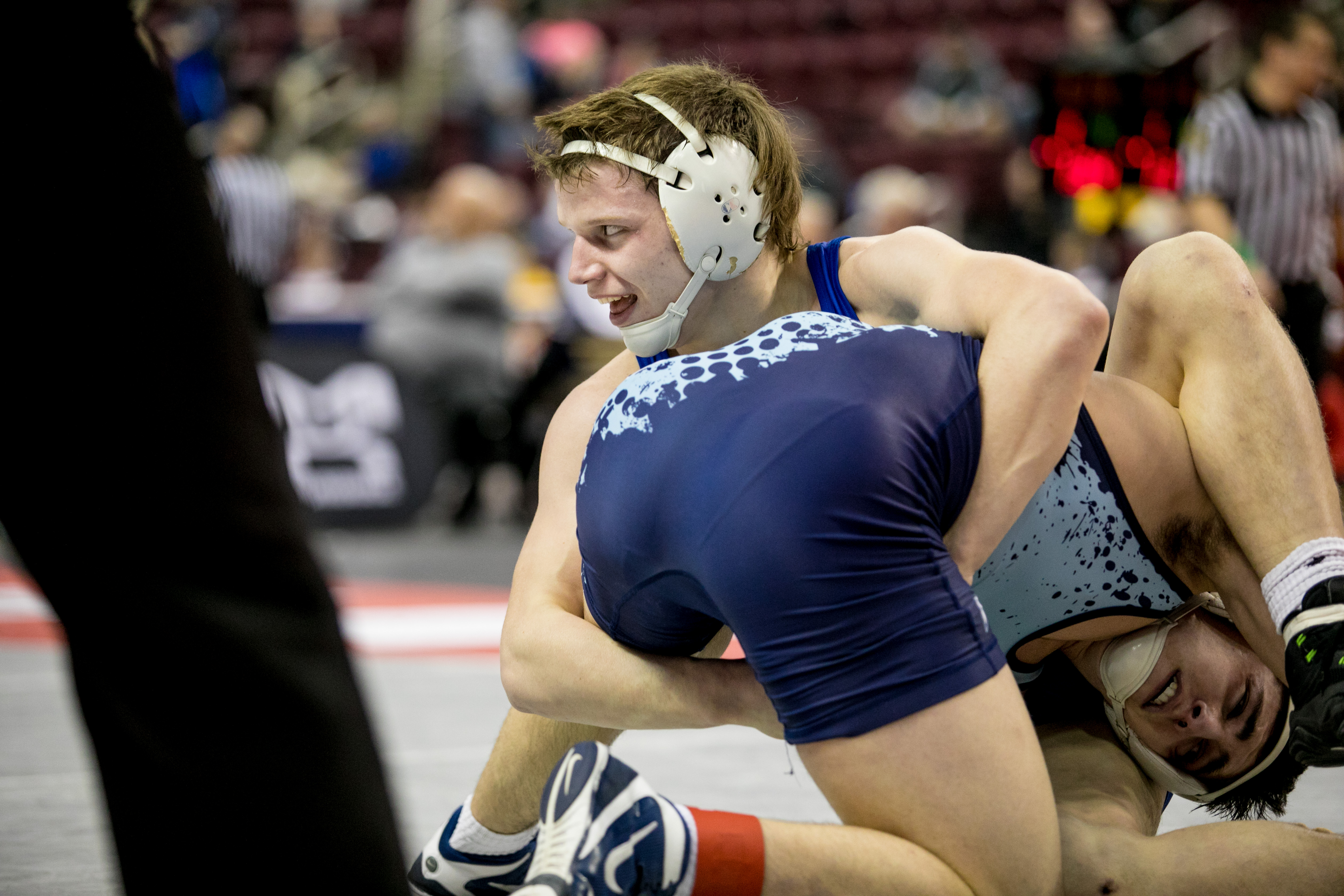 HERSHEY — The youth movement has officially started in the Ches-Mont League.

Downingtown West senior Doug Zapf (120) nearly fell victim to youth, but with the scramble of his career, survived to reach his second straight state semifinals, which will begin Saturday at 9 am.

Tied at one in sudden victory, Waynesburg Central freshman, Wyatt Henson, got in on one of Zapf’s legs, forcing the Whippet to try and roll out of it. For a second or two (or maybe even three), Zapf’s back was on the mat, but he was able to get to high ground to score the winning takedown for a 3-1 victory.

“I wasn’t freaking out,” Zapf said. “I’ve been in that position a lot, so I stayed calm and just thought I had put this much work in, and I came too far, to let it end like that.”

Zapf, as well as Delaney and Catka, who also made the semis, clinched a top-six finish. For Zapf, getting back to the finals and competing for a second straight title in a row is priority one.

He’ll have a bit of revenge on his side with Cedar Cliff’s JJ Wilson as his opponent. Wilson was the last wrestler to pin Zapf, in the opener of the 2016 state tournament when Zapf was a sophomore.

Earlier in the afternoon Delaney became the first state medalist under head coach Rob Beighley and latest since Jimmy Long did it in 2011.

“It’s crazy,” Delaney said. “It’s amazing for me and for my school and my teammates. You put in all that hard work and all year you’re wanting to get a medal and you keep pushing and it finally pays off.”

Delaney scored the first, and only, takedown of the bout against Mifflin County’s returning eighth-place medalist, Christian Fisher, in the first period. The two traded reversals in the same frame, and after neither could escape or score from top, Delaney set himself up with a semifinal showdown with Hempfield’s Kyle Burkholder.

“It’s a crazy opportunity to accomplish my goals,” Delaney said. “My goal (of a state title) is still possible.”

Mousaw started his day in the consolation bracket with a 12-second pin against Council Rock South’s Nik Korbich to send him to the blood round against Harrisburg junior Nehemiah Diggs. From the top position in a 2-2 match to start the second, Mousaw saw an opening to execute his favorite move, the spladle.

After getting Diggs in it, Mousaw patiently shimmied his shoulders farther and farther down before getting the fall 36 seconds into the period to become Unionville’s first medalist since Mason Popham in 2011.

“The element of surprise really helps me, I think,” Mousaw said “I kind of just go with the flow and if (the spladle) comes up, I take it.”

Hale lost his quarterfinal bout against Belle Vernon’s Scott Joll, 5-1, but responded with a 2-1 decision over Dallas’ Steven Newell in ride out. After holding Newell down the first 30 seconds, Hale escaped quickly during his turn on bottom and held off Newell to give West two medalists in the same year for the first time.

“It’s the best feeling ever,” Hale said. “It’s exciting being here, but there is still work to do, getting higher on the podium.”

Hale and Mousaw will square off for the third time this postseason, each owning a win.

Downingtown East’s Lukas Richie (126) was leading his quarterfinal bout against Greater Latrobe’s Gabe Willochell, but got caught by a cement mixer and was pinned. He then lost a 1-0 decision to Bethlehem Catholic’s Kenny Herrmann, denying him a medal.

Downingtown West’s Nick Lilley (138) experienced the same fate as he was unable to escape from bottom and lost to Parkland’s Zach Ortman, 3-0, in the blood round. Lilley finished his career with a 110-52 record, as a two-time state qualifier.