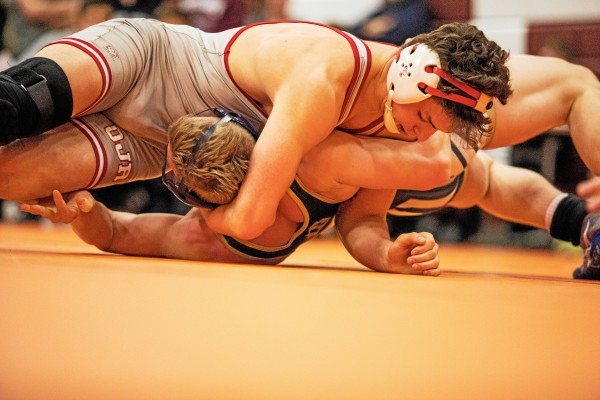 Ryan Resnick wants to get back to Hershey.

And he’s looking to do more during his next visit than just be there — he did that his sophomore year, the only time he qualified for the PIAA AAA Championships; and this year’s PIAA Class AAA Duals, where he ended up a spectator due to a rules situation.

“I want to be a state champion,” the Owen J. Roberts senior said after winning the 160-pound title at last weekend’s Pioneer Athletic Conference tournament. “I put in a lot of work this summer.”

Resnick and 12 of his Roberts teammates — among them his brother, Luke — will be looking to clear the next hurdle standing between them and a pass to the Giant Center. They will join 71 other PAC representatives, and 84 from the Central League, at Spring-Ford High School Saturday for the District 1-AAA West competition.

The Wildcats were keyed by the individual championships of Ryan Resnick and Nick Duliakas, who pinned and tech-falled his way to a gold medal at 195.

Duliakas’ first-period drop in the final was particularly big, putting OJR in position to edge Boyertown for the team title, 216-215.

“It would have been tough to do what we did and not win,” OJR head coach Steve DeRafelo said. “Everybody wrestled well all year. You look around District One … it’s one of the toughest districts. All 14 of our kids got it done.”

Resnick (35-2) will face either Spring-Ford’s Michael Gradwell or Haverford’s Alex Ramos to open the weekend. Duliakas (22-6) starts off against either Pope John Paul II’s Brendan Rau or Penncrest’s Marshall Smith at the start.

Boyertown, for its part, will be looking to extend its string of district team championships to four, getting a final one for head coach Pete Ventresca with his 12-year tenure leading the Bear program soon to end. Its hopes also rest on a 13-wrestler contingent of advancers, headed by five individual champions.

Jakob Campbell, who last weekend became a four-time PAC champion, is shooting to achieve a similar feat at the district level. Campbell (29-4) will open at 126 against either Norristown’s Isaiah Tucker or Lower Merion’s James Lledo in a 126-pound bracket that features Garnet Valley’s Matt Marino (35-2) at the lower end.

Boyertown’s Chris Berry works to flip over Upper Perkiomen’s Jacob Folk during his match at 160 earlier this season. Berry will look to continue his success at the District 1-AAA West competition after winning gold at the PAC Individual Championships. (Sam Stewart – Digital First Media)

David (32-5) will be looking to finish as a district champ after runner-up showings the last two years. He opens at 120 against either Spring-Ford’s Derek Nugent or Strath Haven’s Joe Andraos.

Matt Wilde (37-3) shoots for a second district championship, opening at 113 against either Perkiomen Valley’s Stephen Coleman or Lower Merion’s Andrew Coughlin. He won out at PACs in a 3-2 decision against Spring-Ford’s Brandon Meredith … an opponent with whom the Bear senior has considerable history.

“Seesaw battles. That’s the way it’s been all the time,” Wilde said. “I’m just trying to keep working. This is the first step toward bigger things.”

Chris Berry (31-9) is coming off a first-ever PAC individual title at 152. The Bear senior is looking to achieve a similar feat at the district level when he opens against either Owen J’s Ricky McCutchen or Haverford’s Gavin Berke.

“I was really glad I got to do that, win a PAC championship,” Berry said. “I want to keep on going all the way to states, and see what happens.”

Elijah Jones (37-6), like Berry, comes to districts on the heels of a first-time PAC title. His bid for a first district gold medal opens at 182 against either OJR’s Griffin Gerber or Upper Darby’s Dezhan Peterson.

Methacton senior Bryce Reddington (31-0), the PAC’s 145-pound champion and its Outstanding Wrestler, has also been a Southeast AAA Regional titlist during his career. But he wants to add a district championship to his resumé and will seek to do that by opening against either Boyertown’s Evan Mortimer or Strath Haven’s John Crawford.

“I don’t take anything off the mat,” Reddington said. “I’m looking forward to being one of the few guys going on.”

Dylan Henry (27-4) and Brendan Marion (29-4) were the Warriors’ other weight-class champions at 138 and 170, respectively. They are both pursuing their first district titles: Henry against either Boyertown’s Brett Breidor or Ridley’s Kyle Strazdus, Marion against either Owen J’s Jason Zollers or Upper Darby’s John Herbison.

Altrogge (17-8) opens against either Roberts’ David Forrest or Garnet Valley’s Kevin Puliti. Fuentes (26-4) will have either Boyertown’s Christian Fox or Ridley’s Davis Huth in his first bout.

Reaching the 100-win mark is a big-time achievement for any high-school wrestler.

Doing it in front of a hometown crowd makes the moment even bigger.

Brandon Meredith is in position to experience that this weekend. The Spring-Ford junior is one win away from 100; he will become the Ram mat program’s 17th wrestler to attain that milestone.

Chris Berry can also get his 100th at districts. With a 98-41 career record, he’s looking to join classmates Jakob Campbell, David Campbell and Hunter Vogels — the latter two having achieved that distinction this season — and the Boyertown program’s other 25 triple-digit performers.

Pottsgrove’s Ryan Finn is also closing in on the mark. Off his third-place finish at PACs, the Falcons’ senior 170-pounder is 96-32; he stands to become the Falcons’ seventh 100-bout winner.

Bryce Reddington was the PAC’s lone wrestler to bring an unbeaten record to the league tourney … and leave with it intact.

This weekend, he will share the distinction with two Central League grapplers.

Penncrest freshman Dayton DelViscio is 33-0 at 106, and Upper Darby senior Brian Kennerly 28-0 at 220. Kennerly was one of 12 Royals whose medal finishes helped secure the team championship over Garnet Valley, 216-209.5.