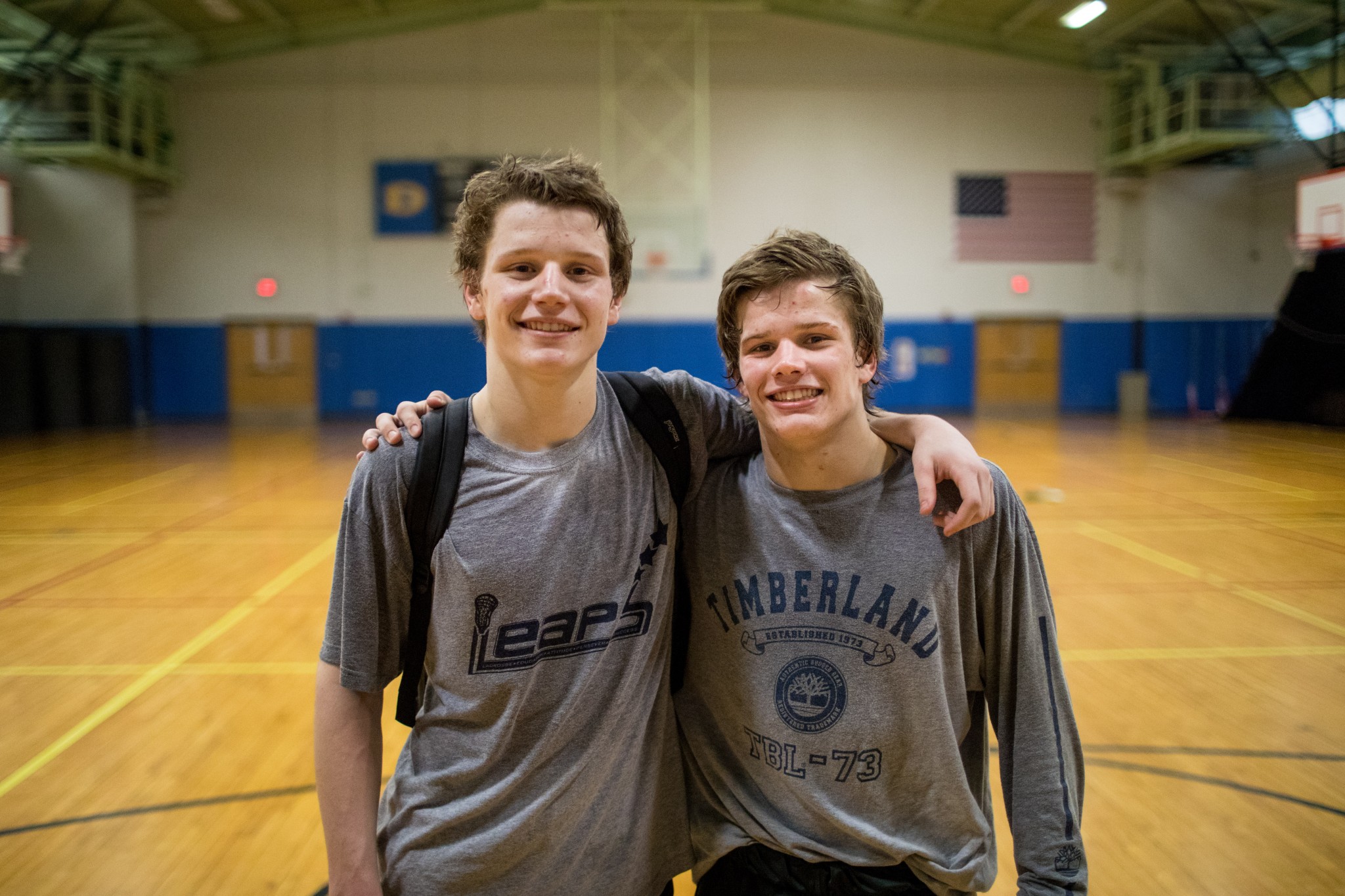 DOWNINGTOWN — With 10 children in the family, wrestling as the sport of choice may have been the obvious choice, if only for the food budget.

For Gavin and Max Hale, wrestling has been as much a part of the family as sharing bedrooms or squeezing into cars.

Gavin, a junior 145-pounder, is looking to convert his third trip to districts into his first trek to regionals. Max, a 152-pound freshman, is the furthest developed as the third Hale to wrestle for Downingtown West.

On a team with three sets of brothers, the Hales are tucked right in the middle of a lineup that is right in the thick of its rise in District 1.

“They’re hard-nosed and they’re brawlers,” West coach Brad Breese said. “Their technique is Ok. Max, technically, is better than Ok, and they go and go and go. They take a couple little things and beat you to death with them. You better be ready to go to war when one of those guys walks out there on the mat.”

Saturday, all the way up at Quakertown High, 13 Whippets and the rest of the Ches-Mont League qualifiers will join those from the Suburban One League American Division for the District 1-AAA Central tournament, starting at 9 a.m.

In other postseason action, Conestoga sends seven to the District 1 West tournament, Church Farm hosts the District 1/12-AA tournament and Malvern Prep and Westtown will head to Lehigh University, Friday and Saturday, for the National Prep tournament.

The three 3A district tourneys will churn out four qualifiers to create a 12-man bracket for regionals the following weekend. Gavin, who placed third at leagues, is counting on a season’s worth of battling with his little brother will pay off.

“I think it helps out, pushing each other,” Gavin said. “I gotta be better than my younger brother.”

That may be a tough standard for Gavin to keep, as Max placed a spot higher last week, finishing runner-up to Coatesville’s Chase Stephens.

Max has 27 wins as a freshman, maybe none bigger than an 11-3 major decision over West Chester Rustin’s Dan Labus in the league semifinals. A smart younger brother, Max gives credit where credit is due.

“It’s definitely good having (Gavin) as a role model,” Max said. “I try to incorporate things he does and use it as my own.”

Roman Hale, the father of the six Hale sons and four Hale daughters, was a state qualifier for West Chester East in 1988. Oldest son, Gabe Hale, matched his father’s fete in 2014, reaching states, and one-upping him with a win in the first round.

The task is clear as day for the current pair of Hales.

“Gabe set the standard for us,” Gavin said. “Max is a little better than me, so he better place at states.”

West also has Doug (106 pounds) and Cole Zapf (195) competing Saturday, and Grant and Chase Hanak played starting roles for the Whippets this season.

The Central tournament will have a bit of a different look, with Norristown and Upper Merion gone from the SOLA to the Pioneer Athletic Conference, and Hatboro-Horsham and Quakertown taking their places.

Those from the SOLA haven’t fared well against the Ches-Mont in the first four years of the current setup. In that span, the Ches-Mont has won 45 of 56 titles, is 291-164 against SOLA foes and claims 80 percent of the regional qualifiers.

Here’s a quick glance at what to look for:

from the SOLA, and he split with Doug Zapf last season in two meetings. Zapf won the second, 8-3, at regionals. They’ll be favored to meet in the finals. Avon Grove’s Jordan Howard is on Stahl’s side, while West Chester East’s Corey Celenza is up top with Zapf.

For the second straight year, Plymouth Whitemarsh’s Marco DiBattista enters districts with one loss on the season. Downingtown East’s Lukas Richie gave him his second loss last winter, as DiBattista was unable to advance. Richie is favored to get to the finals from the top, though Octorara’s Seth Hoopes is there also. DiBattista will likely have to get past West Chester Henderson’s Killian Delaney in the semifinals.

For the second straight week, Henderson’s Jake Reid is the lone senior in the bracket, and he’s the favorite. The SOLA sends two freshmen, Quakertown’s Zack Lewis and Upper Moreland’s Chris Walker, as its top two seeds. One would think a Ches-Mont finals rematch between Reid and Octorara’s Liam Babauta is very possible, but we’ll see what fight the youngsters have.

Undefeated Jason Amy of Upper Moreland looks to give Rustin’s Brett Kaliner a run if they meet in the finals. Kaliner has a pair of wins over Amy, both coming as freshmen in the district tournament. WC East’s Tommy Luke and Kennett’s Gerhardt Reiter hope to get first cracks at Amy on the bottom half of the bracket.

This weight looks like a good chance of a sweep for the Ches-Mont with a quartet of sophomores coming in from the SOLA. Much like last week, the health of Kennett’s Drew Massetti is the biggest question mark, but he should at least be able to advance. Unionville’s Jake Taylor and West’s Nick Lilley appear destined for another tight semi bout.

Another young group from the SOLA is here, led by Hatboro Horsham’s Brad Mallon. He’ll likely have to get by Downingtown East’s Connor Birzes and West’s Alex Murta to see the finals. Rustin’s Tyler Kaliner looks like a safe bet from the top half, though Coatesville’s Ryan Dellicompagni showed improvement a week ago.

Many people think August Gershwin could be a postseason dark horse, but Cheltenham’s light schedule makes it a hard read. Gershwin is 29-1, but is just 2-5 against Ches-Mont foes the previous three district tournaments. Avon Grove’s Nick Barnhart should get a crack at him in the semis, and undefeated Brent Windle of Coatesville will likely be waiting in the finals.

West’s Max Hale did himself a favor reaching the Ches-Mont finals last week, setting himself up opposite of Coatesville’s Chase Stephens. Hale could see Wissahickon’s Nick Senderling in the semis, though Hendersons’ Ray Martin could give Senderling a go in the quarterfinals. Rustin’s Dan Labus is up top with Stephens.

This is the SOLA’s deepest weight, with Upper Dublin’s Mason Novak and PW’s Zach Wakefield. They are appear to fit the mold of solid, but not spectacular, similar to the Ches-Mont’s crop. Wakefield has Octorara’s Scott Burridge first, with Rustin’s Collin Hurley likely waiting in the semis. Below, Novak has Unionville’s Tyler Mousaw and West’s Gio Angelini to tangle with.

Oxford’s David Cox is the big favorite, and has WC East’s Andrew DiBernardo on his half. Opposite, PW’s Tommy DiSisto is a returning regional qualifier and should get West’s Joe Shafer in quarters. Shafer is looking to bounce back from a disappointing fourth-place at leagues. Octorara’s Ryan Sharpless hopes to stay hot on DiSisto’s side.

Avon Grove’s Kevin Edwards should have a smooth trip to the finals, where he’ll be favored. Hatboro’s Jalen Edwards is the SOLA’s top seed but he will have some traffic to get to the finals, namely, Coatesville’s Sean McBride. If Oxford’s Tim Davis can win his pigtail to get to Jalen Edwards, he owns a 9-2 decision from back in December.

Quakertown’s Noah Wood could be a good barometer for how West’s Cole Zapf handles his bump up to 195 this postseason. Wood has a tougher path to the finals, though, with Downingtown East’s Josh Wileczek and Sun Valley’s Hunter Catka on his side. With Zapf, Rustin’s Andrew Lamberjack always makes things difficult.

This is a tough weight to gauge. Unionville’s Mike Maguire all but gave away his finals match against Coatesville’s Alex Raimondo, pitting him in the bottom half of the bracket with PW’s Nick Sudell. Maguire lost handedly to Sudell, twice, last year at districts, and a third bout may happen in the semis. Up top, Raimondo and West’s Chris Madanat are the biggest threats.

Great Valley’s Ryan Cavanaugh announced his arrival to the scene with a league title last week. He’s up top with Downingtown East’s Brendan McGinley, and the two had a one-point overtime bout a week ago. Avon Grove’s Josh Walls is on the other half, along with Hatboro’s pin-specialist, Nick Chapman.