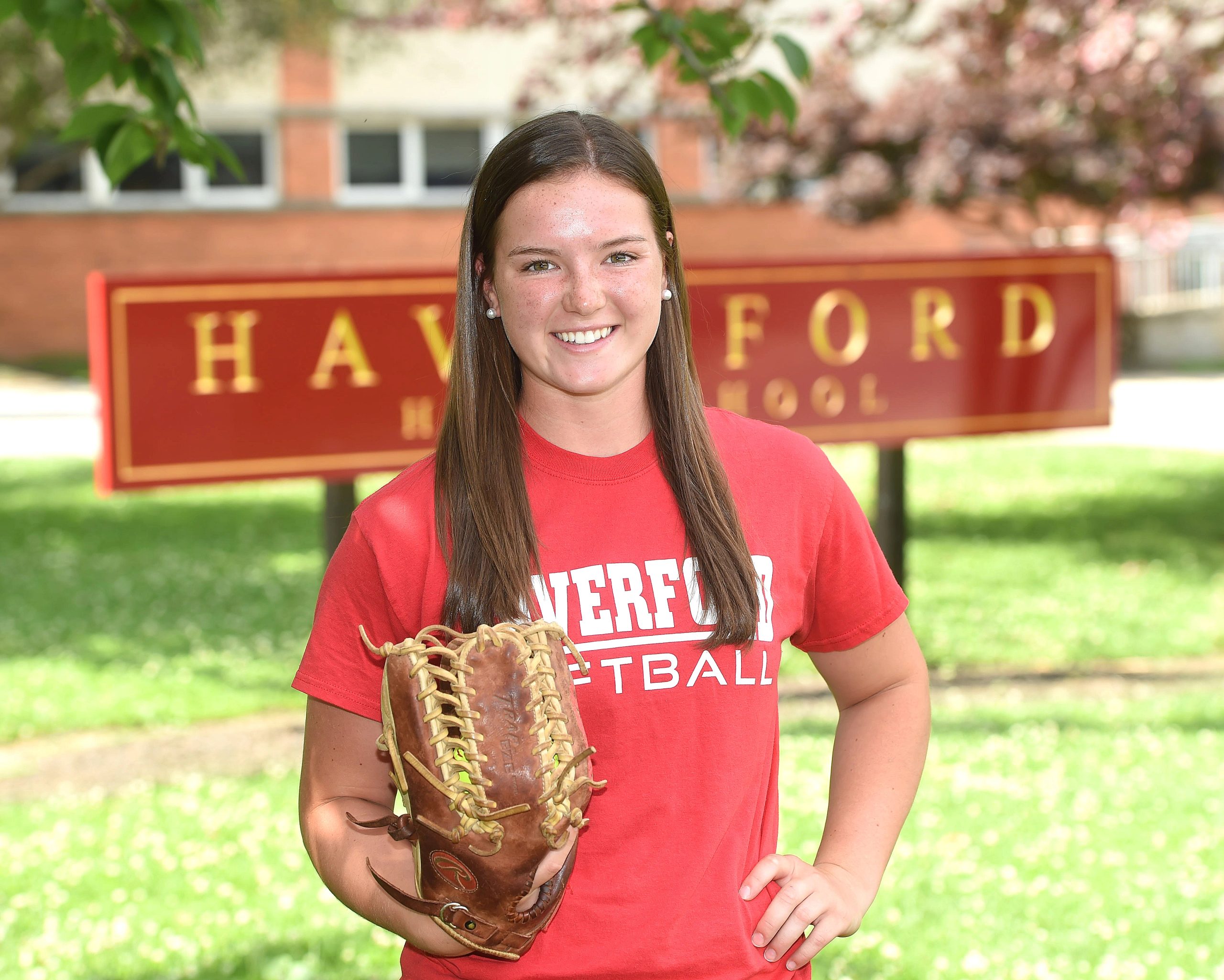 From the classroom to the playing field, Emma Taylor created a lifetime of memories at Haverford High School.

In only three seasons the ace softball pitcher shattered school records with 53 victories, 20 shutouts, 544 strikeouts and a 1.28 ERA.

Coaches and teammates cannot wait to see the encore, for the super-smart Taylor is taking her mitt and cleats to Yale. With a faculty full of Nobel Prize winners and a reputation for producing world class leaders, including five U.S. presidents, the sky is the limit for Taylor.

Right now, her plan is to major in environmental studies. In four years, look for the perennial Honor Roll, National Honor Society, National Science Honor Society, and All-Delco athlete to be another Yale success story. “Anything she wanted to do would not surprise me,” Fords coach Bob Newman said. “Anything. She’s so focused. Anything she puts her mind to, she does.”

Anybody who has seen what Taylor has done for the Fords would have a tough time disputing that. Taylor was frustrated early in her career learning the sweet science of pitching, which didn’t come to her as easily as academics. To work through the obstacles and become the face of Delaware County softball tells you how driven she is.

It was important for Taylor, the conscientious team captain who keeps a scrapbook and writes thank you notes, to lock in early on a college destination to be completely available to teammates and classmates. Yale and Harvard were among the finalists. Yale just felt like the ultimate challenge academically and athletically.

“It’s definitely a top academic school,” Taylor said. “When I talked to the coaches and the players, everybody was just super welcoming. My recruiting experience was unique because of COVID. There were a lot more phone calls than in-person meetings. Over spring break, I got to meet the whole team and I can definitely see myself fitting in there. So, I’m excited to start. I’m excited to get to know the team and see what happens with softball. It’s a new beginning.”

As the starting pitcher at Haverford, Taylor gave her team a chance to win each time she took the ball. In a game for the ages last season, she struck out 24 batters and drove in the decisive run to clinch a share of the Central League championship with a 2-1, 12-inning win over highly regarded archrival Garnet Valley.

In Taylor’s junior season, she belted a walk-off home run in the PIAA Class 6A semifinals to defeat Pennsbury, which has multiple state titles. That story ended one win short of the title. Though the Fords were upset in the first round of the state tournament this year, it wasn’t for lack of effort.

“We had a really successful season,” Taylor said. “I wouldn’t let our last game define how our season went. It’s hard because I know we could have made it back to the state title round. We had the potential. It’s a long season, especially once you get through districts. But you can’t take anything away from this team because it was super-talented.”

Speaking of talent, it will be everywhere on every level when Taylor arrives in New Haven, Conn. The roll of athletes who made their marks at Yale isn’t as noteworthy as the scholars and leaders.

“It is exciting and it’s crazy,” Taylor said. “It’s exciting to know that there are opportunities for me to work with some of those professors in research or take classes with them. I’m going to major in environmental studies, but we’ll see. Who knows what classes I’m going to take and where I’m going to be in four years?”

Taylor’s interest in science obviously extends to the playing field, where there is no easy way to perfect stride, leg drive and spin rate.

“Pitching has a lot to do with your mechanics and spin,” Taylor said. “There are times when on paper it looks like I pitched a good game but from the physical aspect of that you can tell if you felt off. Muscle memory is interesting. Also, being able to make adjustments as you go through a game or a practice with your arm, with any part of your pitching, I think that’s an interesting part of it and how you learn that over time.”

Taylor is going to miss her Fords teammates, some of whom joined her for senior week to talk about life, their future, and their softball past. The anniversary of their 2021 state final game recently passed.

“We kind of talked about that game and the states from this year,” Taylor said. “But when we talk about it, it’s all good softball memories. It’s four years of memories we can talk about.”

Taylor always will remember the Haverford softball coaches who showed the way, a cast that in addition to Newman includes Tom Reisch, Jill Marshall and Amber Millison.

“They’ve both always been supportive and given me endless opportunities,” Taylor said of Newman and Reisch. “Amber calls pitches and is definitely part of the pitching team. Ms. Marshall, along with the other coaches, taught me how to play at a higher level and how to truly enjoy the game.”

Taylor took the enjoyment to another level when she personally helped supervise the softball workouts leading up to this season and signed up eighth-graders for varsity softball next year.

Newman will miss Taylor’s sense of humor, a side many rarely got a chance to see. Newman’s favorite is being asked to do his “little dance” before one of Taylor’s at-bats.

“She will lighten it up,” Newman said. “She’s a great kid. A great kid. Everything you asked her to do, she found time to do it. She’s remarkable.”