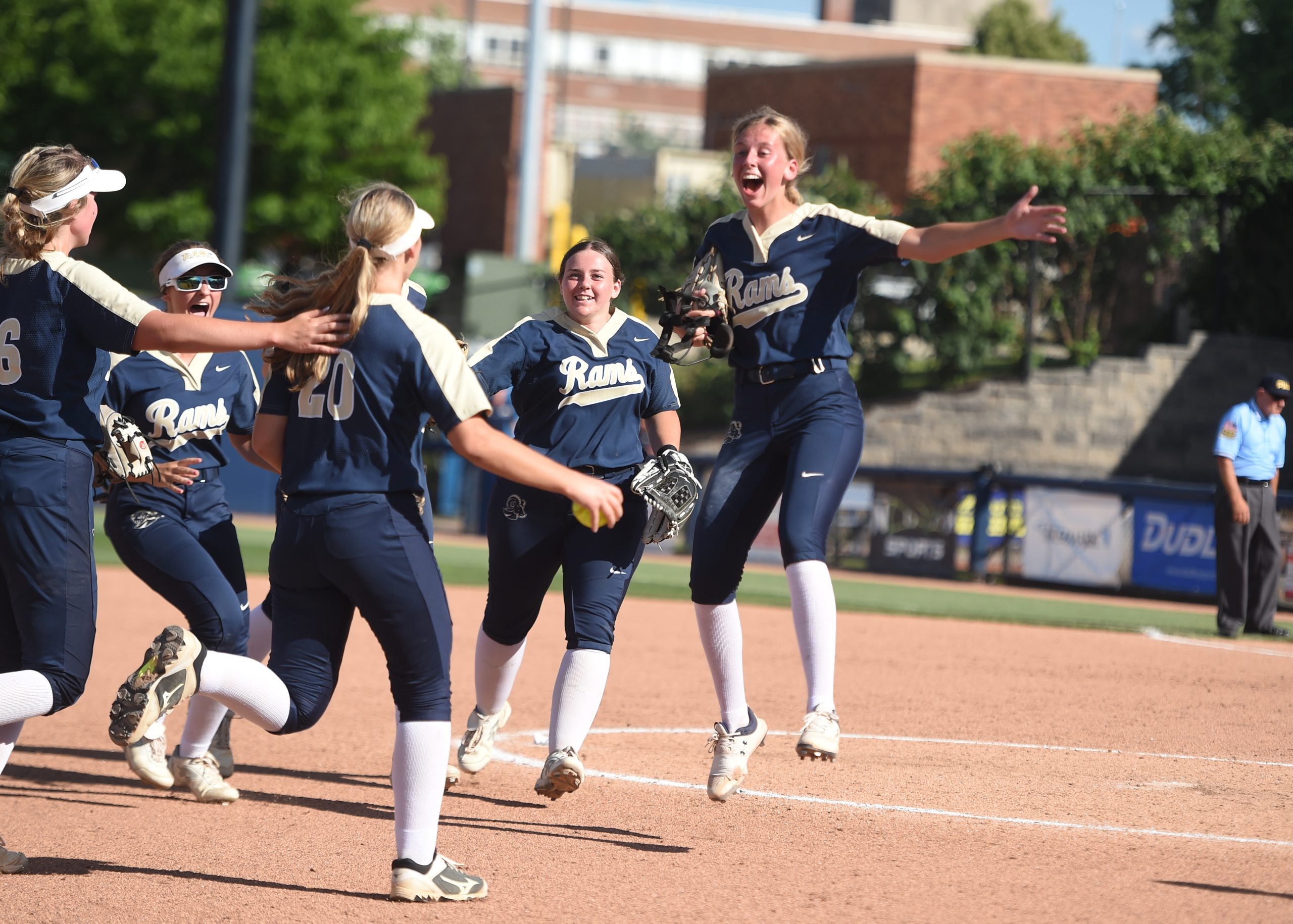 UNIVERSITY PARK >> It was the perfect end to a sometimes not-so-perfect season for the Spring-Ford softball team.

The Rams finished their 2022 campaign with an unprecedented feat, one neither they or any other program in the Pioneer Athletic Conference ever achieved. They became the Pennsylvania Interscholastic Athletic Association’s Class 6A champion, winning their title tilt with Seneca Valley, 5-0, at Penn State University’s Beard Field on Friday afternoon.

“Much as the kids gave me the last 25 years, this game was another gift,” Hughes, who affirmed his retirement from the post, said afterward. It was equally special for seniors like Scogna, who worked through injury issues in recent weeks to end her high-school career on the ultimate winning note. Scogna limited Seneca Valley to only four baserunners in her two-hit shutout, backed by a defense that made every play look routine … a standard for the season.

Scogna did not record a strikeout, making her unflappable fielders all the more important.

“I just worked the ball inside and let them put it in play,” Scogna said. “Riley (Gancasz) made some great plays, and we trust ourselves in the field.”
One of the more notable plays was sure-handed shortstop Gancasz snaring a Mia Ryan liner in the first, then relaying to Williams at first to double off Kara Pasquale, who had strayed too far off base when the ball was hit.

“It’s happened a couple times,” Gancasz said. “We’ve made a couple traditional double plays, and a few where a runner has been caught off base. It’s all quick thinking.” Spring-Ford’s run through the state playoffs proved a satisfactory cap to a post-season during which all their losses came in a two-week span: A 2-0 loss to Boyertown in the PAC Final Four playoffs’ semifinal round on May 18, a 5-2 setback to North Penn in the District 1-6A playoffs’ semifinals, and a 2-1 loss to Haverford in their June 2 third-place game. But in the state tournament, the Rams strung together a four-game win streak at the perfect time, having their way with St. Hubert’s and Penn Manor before gutting out a semifinal takedown of defending champion North Penn.

Friday against the District 7 champion Raiders, the Rams got on the board in the top of the third inning. Morgan Lester singled to center to lead off at-bat, moving to second on Ellie Jarrell’s sacrifice bunt to third. Gracie Carlin then singled to center to score Lester.

That score broke the ice for a Spring-Ford plate attack with a knack for hitting the ball to spots between Seneca Valley fielders. It got another pair or runs in the fourth, bunching four of its nine hits with one out.

Ali Wescott continued her torrid (3-for-3) hitting pace with a single while sister Lexi followed suit. Two batters later, Lester (2-for-4) plated Ali with her single to left, and Ellie Jarrell also singled to left-center to drive home Lexi.

In the fourth, Gracie Carlin hit a leadoff double and scored off Ali Westcott’s third single of the day. The seventh inning saw Caitlin Ashley reach base on a fielding error – one of two miscues SV committed in the frame – and beat the relay throw from the outfield off Gancasz’ sacrifice fly.

That proved more than enough for the Rams (23-3), even while Maddie Gross (hit by pitch) and Lexi Hames (walk) reached base with two out in the bottom of the seventh. Scogna got the final out by inducing Bella Gross to pop up to third, with Carlin making the final out.

Seneca Valley, making its first state-title game appearance since 1992, had its best scoring opportunity come in the third inning when Angelina Chardella doubled with two out. But a 4-3 play ended the threat.

Lexi Hames, the Raiders’ freshman pitcher, chalked up six strikeouts on the day against one walk. But Spring-Ford’s hits and her team’s defensive miscues conspired to dent the 6-0 post-season record she brought into the championship game.

“We were able to adjust to her changeup,” Scogna noted. “We came out aggressive after that.” The post-game celebration proved equal shares joy and sadness for the Spring-Ford seniors, some of whom (Scogna, Williams) will be going to play college ball while others (Potteiger) played for the last time.

“It’s bittersweet,” Scogna said. “Lexi and I were crying at the end. But it’s the best way to go out.”

NOTES >> The championship gave Spring-Ford’s retiring athletic director, Mickey McDaniel, one more state title in that capacity. McDaniel was among the legion of Spring-Ford supporters who made the trip to Penn State for the game.

McCue: Stronger from setbacks, senior-led Spring-Ford shines at the right time
A full circle finish for Williams family with Spring-Ford softball – and then some