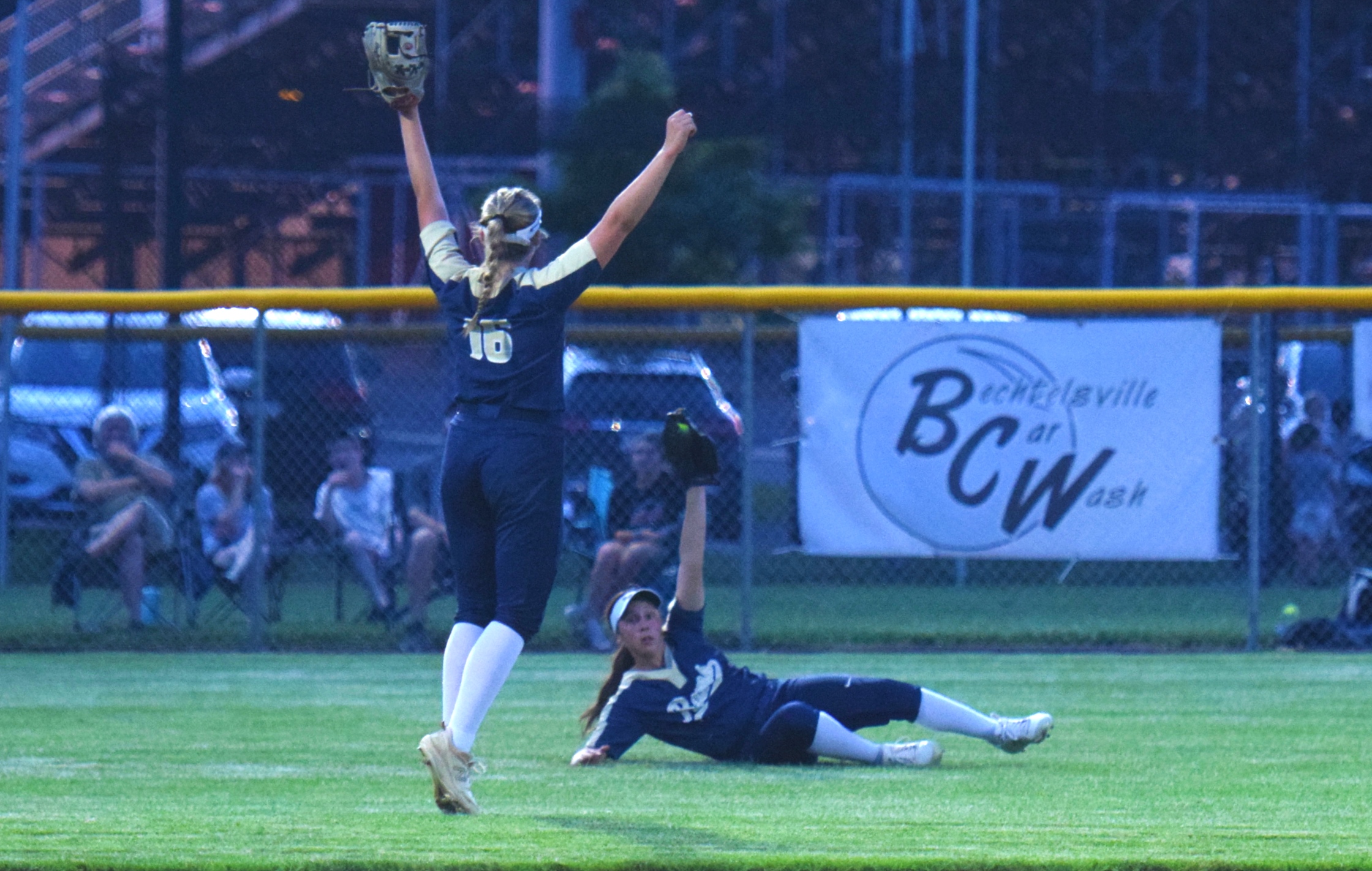 BOYERTOWN >> Allie Wescott was ready to make a play.

“I knew it was going to come to me cause she’d been hitting foul ball after foul ball towards me,” Spring-Ford’s senior left fielder said. “So I was prepared for anything.”

With a runner on second base and North Penn down to its final out in the top of the seventh inning in Monday night’s PIAA Class 6A semifinal, Knights pitcher and Pa. Gatorade Player of the Year Julia Shearer sliced a ball out to left that seemed like it might keep the Knights’ comeback hopes alive.

But Wescott darted in and with a full-extension dive snagged it for a spectacular catch, sealing a 2-0 victory at Boyertown High and sending the Rams to the state final for the first time in program history.

“Right before we ran out of the dugout, everyone was like, ‘You’ve got to dive for everything – this is all or nothing,’” Westcott said. “So when I saw that ball coming in low. I knew my only shot at grabbing it was to dive.”

SOFTBALL FINAL: Spring-Ford 2, North Penn 0
Allie Wescott with a fantastic diving catch in left for the final out, giving Jules Scogna a shutout win and sending the Rams to the PIAA 6A title game on Friday pic.twitter.com/jXtVOfoKkb

A leadoff error in the bottom of the fourth led to Spring-Ford (23-3) scoring the contest’s two runs in the inning. Rams right-hander Jules Scogna, meanwhile, worked out of early jams to shut out a potent North Penn offense as Spring-Ford avenged a 5-2 loss to NP in the District 1-6A semifinals to become the first Pioneer Athletic Conference team to make a PIAA title game.

“I’m so excited,” Rams junior center fielder Ellie Jarrell said. “We got into quarters last year and kind of ended on a bad note. But this year, I don’t know, we have really good chemistry as a team and I’m so excited.” The Rams advance to face Seneca Valley in the 6A final 4 p.m. Friday at Penn State’s Beard field. Seneca Valley, the District 7 champ, denied an all-District 1 PIAA final when it rolled past Pennsbury 9-0 in the other semifinal Monday at Chambersburg High School.

“I’m just so excited to be able to keep on playing,” Wescott said. “I love this team so much and to continue on and play all the games that we can possibly play, it just means so much to me.”

North Penn (25-2), which came two wins shy of defending its state title, out-hit Spring-Ford eight to three but the Knights were held scoreless for the first time this season and the first time since last season’s loss to Haverford in the District 1-6A quarterfinals.

“We made the mistake in the infield – they capitalized on it – and then we didn’t get the timely hitting,” Knights coach Rick Torresani said. “We had a lot of people on base almost every inning and just couldn’t get the clutch hit.” Spring-Ford’s Caitlin Ashley celebrates upon scoring her team’s second run in the fourth inning against North Penn during a PIAA Class 6A semifinal Monday at Boyertown. (Austin Hertzog – MediaNews Group)

Caitlin Ashley collected two of the Rams’ three hits, going 2-for-2 with a pair of singles and a run scored. Scogna, who has signed with Boston University, gave up no runs on eight hits and a walk over seven innings while striking out four.

“Honestly, I was just trying to let them hit the ball in play,” Scogna said. “I know that everyone behind me has my back and that I know if they’re putting the ball in play someone’s going to make a play on it.”

Along with Wescott’s fantastic catch, the Rams defense turned 4-6-3 double plays in both the second and sixth frames. Shearer, the 2021-2022 Gatorade Pennsylvania Softball Player of the Year, was strong in the circle despite taking the loss. The junior left-hander allowed two runs – both unearned – on three hits, walked one and struck out eight in six innings. She also went 2-for-4 at the plate.

“She pitched outstanding,” Torresani said. “I mean, what else can she do? I don’t know what anybody could expect more from her – I know there isn’t anything.”

Sarah Sabocsik was 2-for-3 with a double for the Knights while Annabelle Smink finished 2-for-3.

#SOFTBALL: End 4 @AthleticsFord 2, @northpennsb22 0. Error to start B4 leads to Rams plating 2. Jarrell scores from 3rd after a throw to 2nd following an Ashley single. Ashley later scores on a Gancasz groundout. pic.twitter.com/TIZEXT831g

Jarrell started the bottom of the fourth with a grounder back to the pitcher but an errant throw allowed her to reach first then advance to second on the play.

“I was just putting it in play,” Jarrell said. “Make them make a play on it cause stuff just like that can happen. So I sprinted as hard as I could and as soon as I saw that go left I’m busting it to two.”

Ashley followed with a single through the left side and as the Knights threw the ball to the catcher, Ashley broke towards second and slid in to beat the throw. That gave Jarrell the opening to race home, scoring with a slide for a 1-0 Rams advantage.

“As soon as I saw them release the ball I knew I was busting home,” Jarrell said. “And it was even just a plus that she was there [at second].” Ashley went to third on a Grace Carlin sacrifice bunt then scored to make it 2-0 Spring-Ford on Riley Gancasz’s RBI groundout to the shortstop.

North Penn, which erased a 2-0 deficit in the teams’ District 1-6A semifinal May 31 with a five-run seventh, looked for another offensive spark late. The Knights collected four hits in the last three innings but could not break through.

“We definitely wanted some redemption, especially with how the last game turned out,” Jarrell said. “This was such a redeeming thing and brought all of us together.” In the top of the fifth, Shearer hit a two-out single up the middle and stole second but Scogna stranded her there with a strikeout.

Smink started the sixth with a single but the next batter hit into a double play. Gianna Cimino connected on a two-out single but was followed by a fly out to right.

Jarrell hit a one-out double to right in the bottom of the sixth. After an intentional walk to Ashley, Carlin’s sac bunt put runners on second and third but a fly out to left in foul territory kept the Knights down 2-0. With one out in the top of the seventh, Bella Nunn singled up the middle. After a pop up to the pitcher, Nunn’s pinch runner Jaclyn Diaz took second on a wild pitch but Shearer’s hit to left was caught by a diving Wescott.

“Right when it hit my glove, I knew it,” Wescott said. “It was game over.”

In the top of the first, Sabocsik hit a one-out double to left. Smink singled then stole second to put runners at second and third but Scogna denied the Knights an early run with back-to-back strikeouts.

North Penn again threatened in the third. After a Shearer infield single, Sabocsik dropped a base hit into left field. A groundout to second had runners at second and third but a groundout to Scogna kept the game scoreless.