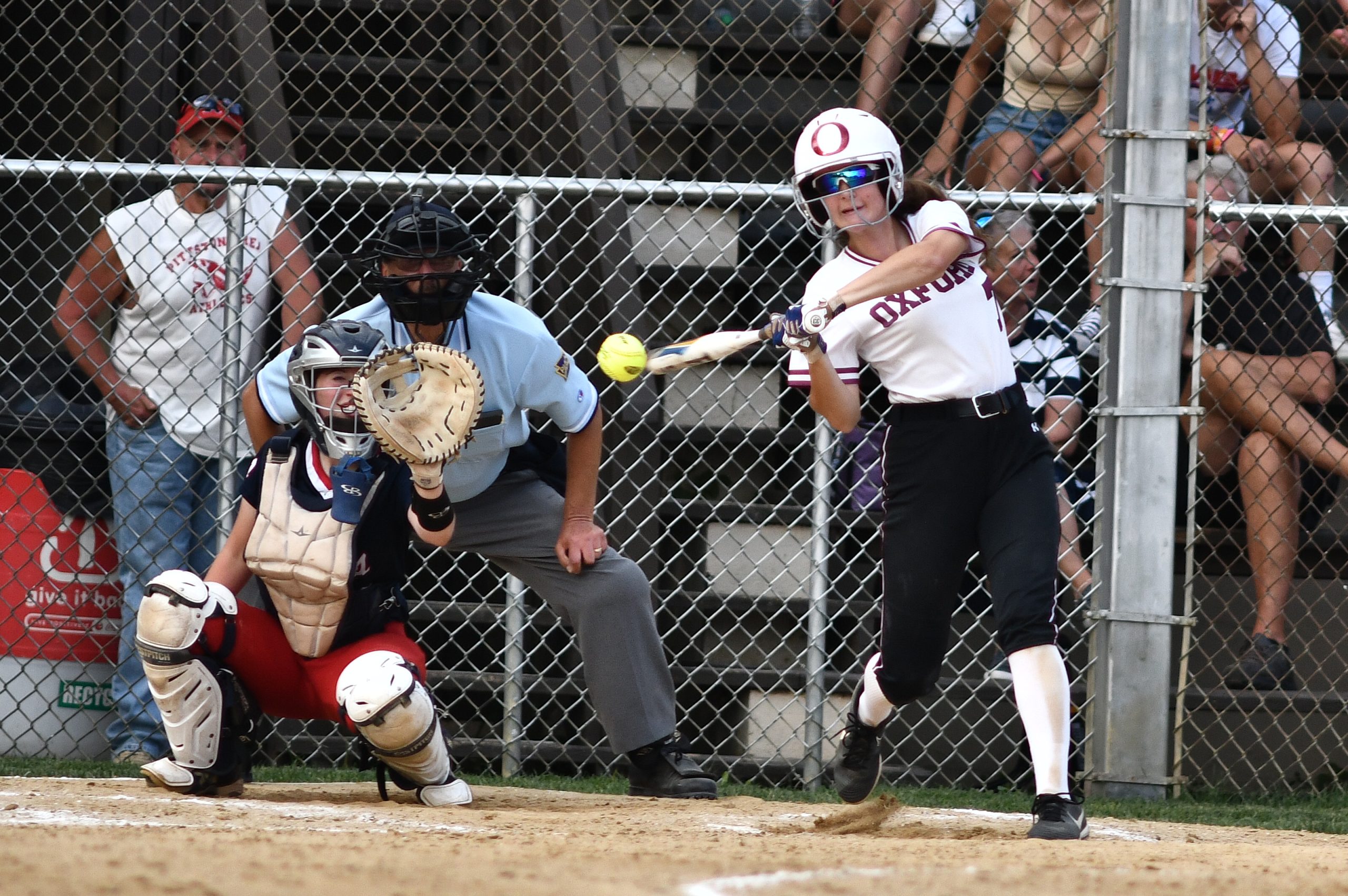 Allentown >> The Oxford High School softball team, which advanced as far as any Hornet squad has in the PIAA postseason, carried its never-say-die spirit into Monday’s PIAA 5A state semifinal against an undefeated Pittston squad.

Against Pittston pitcher Gianna Adams –- who hurled two no-hitters in the District 2 tourney and struck out more than 200 hitters this season -– the Hornets collected multiple hits in both the second and third innings Monday, worked a number of deep counts, and rallied for four runs in the bottom of the sixth inning to almost wipe out a 6-0 deficit.

Although Oxford eventually lost, 8-4, each Hornet interviewed after the game talked about how proud they were of their squad, which won seven of its last nine games and went 5-2 in postseason play despite a No. 7 seed in the District 1 tournament.

“Our girls just don’t quit, they’ve continued to battle all season, they’re a special group,” said Oxford head coach Josh Socash. “We’ve trailed in five or six games in the playoffs but never quit. We’ve got a young team, with only one senior (Hannah Aker) and we’ve gotten better during the season -– and our players can hit.”

For Oxford first baseman Angela Beadle, whose two-run single highlighted the Hornets’ four-run uprising, did her part in the sixth-inning rally that was particularly meaningful.

“I took (that at-bat) a little personally, because I lost my father earlier this year, and all I was thinking about was doing it for him, and doing the best I could for him,” said Beadle, with emotion.

Aker said, “We don’t give up, even though we were down by six runs late in the game, we just kept fighting down to the last out. I’m so glad I got to live out my senior season with us going this far (in the postseason).”

This Hornet squad was only the third Oxford team to make it to PIAA state semifinals -– the other two were the girls’ basketball squad in 2006 and the boys’ basketball team in 2005.

Oxford cleanup hitter Molly Friel, whose infield hit helped ignite the four-run rally, said: “I was really proud of our team today. Even though we were trailing for so long, we just kept working hard and really battled as a team.

“I’m so proud of our season. In the middle of the season, we were struggling, but lately we’ve just really hit our stride, and that’s because we’ve got a great group of girls.”

The Hornets finished with a 5-2 record in the post-season. Seeded seventh in the District 1 5A tournament, the Hornets defeated Pottsgrove 4-3 in the district opener; knocked off No. 2 seed Springfield 4-1 in the quarterfinals; romped to a 13-3 win against No. 3 Upper Perkiomen in the semifinals; and lost by one run to top seed West Chester Rustin in the district championship final. In their PIAA 5A tourney opener, the Hornets stung District 12 champion Cardinal O’Hara 7-1, then defeated District 3 champ Exeter 7-3 in the state quarterfinals.

Oxford right fielder Emily Basilio, who collected a couple of hits in the PIAA 5A state semifinal Monday, said: “We’ve kept coming back all season, it’s been awesome.”

Hornet shortstop McKenna Frank, who collected two hits in the No. 3 spot Monday, including a single that opened the sixth-inning rally, said: “We just don’t quit, we just keep trying the whole game. It was pretty cool to come this far (in States), but I just wish we could have come out with a win today.”