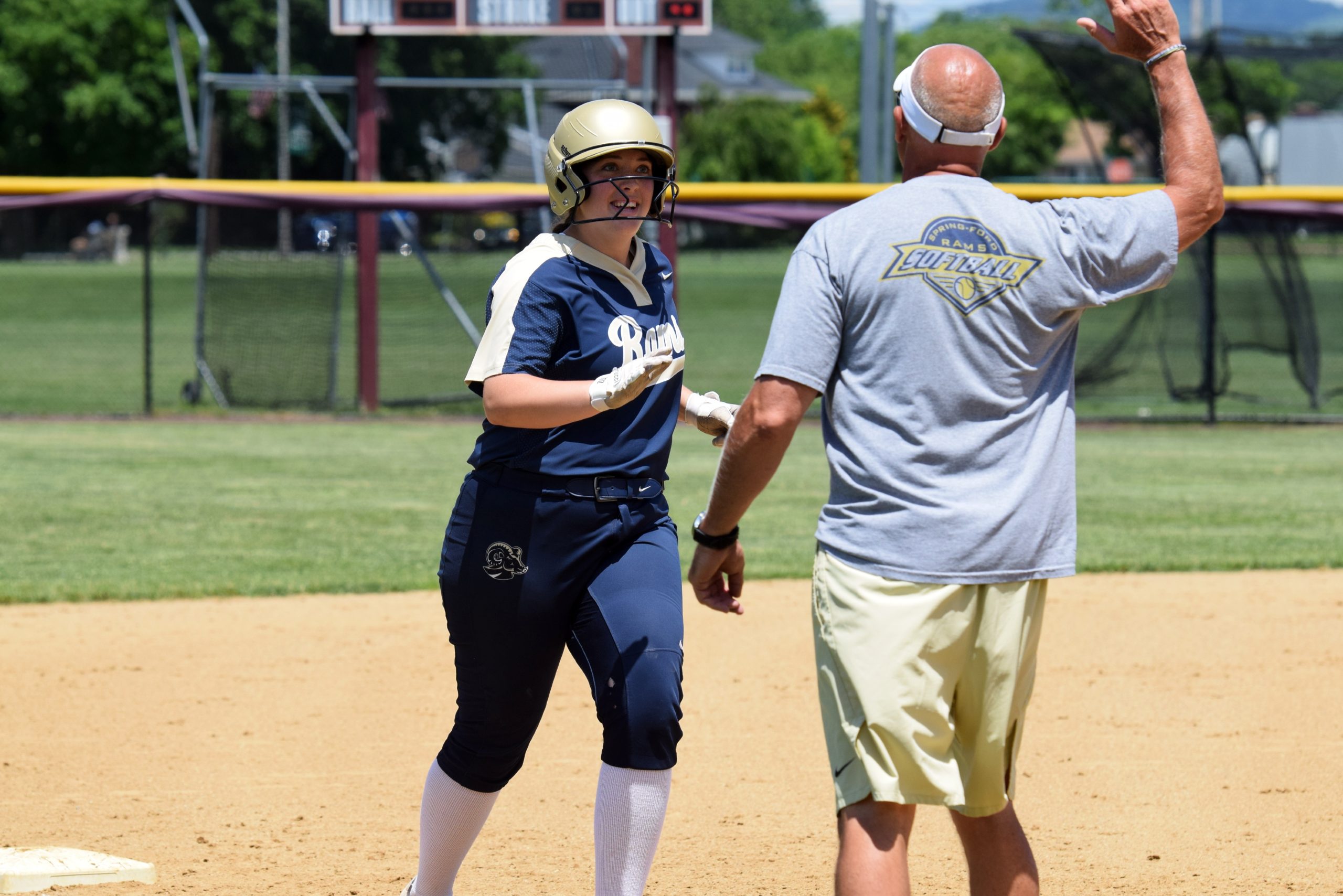 Spring-Ford's Caitlin Ashley gets a high-five from head coach Tim Hughes after rounding third base on a home run in the second inning against Penn Manor in a PIAA 6A quarterfinal Thursday at Gov. Mifflin. (Austin Hertzog - MediaNews Group)

SHILLINGTON >> It can be a time of mixed feelings for high-school athletes fortunate enough to be in a playoff run in early June.

The thrill of contending for a state title is tempered by the realization of the academic year coming to a close, and summer vacation hot on its tail. That’s the pleasant dilemma in which Spring-Ford finds itself as a result of Thursday’s PIAA Class 6A quarterfinal-round game with Penn Manor.

An 11-4 victory at Shillington High returns the Rams to the state’s big-school semifinal round for the first time since 2019. In the extension of their season into the coming week, the locals will face North Penn (1-1) Monday for a spot in next Friday’s championship game at Penn State University … a rematch of their District 1-6A semifinal-round meeting.

It will be the fourth time the program has reached that lofty perch in head coach Tim Hughes’ 25-year tenure at Spring-Ford. This one owed much to the home-run hitting of Caitlin Ashley and Riley Gancasz in tandem with the combined pitching might of Jules Scogna and Jess Fliszar.

“I’m so proud of these kids,” an ebullient Hughes said afterward. “We’re playing short, but this is a resilient group.” Spring-Ford’s Jessica Fliszar, left, is congratulated after recording the final out against Penn Manor in a PIAA 6A quarterfinal Thursday at Gov. Mifflin. (Austin Hertzog – MediaNews Group) Spring-Ford’s Ellie Jarrell watches the flight of her RBI single in the sixth inning against Penn Manor in a PIAA 6A quarterfinal Thursday at Gov. Mifflin. (Austin Hertzog – MediaNews Group)

For the team’s seniors, who graduated Wednesday, and the underclassmen, whose last day will be Friday, remaining in the state-title chase is a prize worthy of the effort they put out against the District 3-6A champion Comets.

An initial 6-0 outburst in a second-inning bataround owed its start to a solo homer by Gancasz, who gave the Rams a 2-for-3 day at the plate and solid defensive play at shortstop. The capper was Ashley’s two-run shot over the center-field fence, in and around other hits from Ali Wescott and Ellie Jarrell (3-for-4, double, three RBI).

Penn Manor (20-6) took some of the comfort out of the early production by scoring three runs in the fourth and one in the fifth, but Spring-Ford (22-3) dashed the Comets’ comeback bid with a five-spot in the sixth. The big blow was Ashby’s grand slam with one out — her third “salami,” and first multi-homer game, of her softball career — after Ellie Jarrell singled Gancasz home.

“It was really nice to help the defense, the way they put out the work,” Ashley (3-for-4, six RBI) said. “Everyone was hitting the ball today.”

On the mound, Scogna gave Spring-Ford a solid four innings of work while still contending with issues sustained in last week’s District 1-6A playoff semifinal with North Penn. After Penn Manor struck for its runs in the fourth, Fliszar came on to nail down the win with three frames of two-hit, three-strikeout relief — the lone blot a solo homer from Comets reliever Emily Riggs in the fifth.

“We both warmed up before the game,” Fliszar noted. “I think we wanted to show them something different.”

“We tried to get three out of Jules,” Hughes added, “and we got four. Jess comes in and does a great job.”

The prediction of a Governor Mifflin official that “balls could leave the park” proved quite prophetic. Hughes recalled how two of the homers bounced off the top of the outfield fence.

“How many times have you seen that?” he asked. Spring-Ford’s Jules Scogna delivers to the plate against Penn Manor in a PIAA 6A quarterfinal Thursday at Gov. Mifflin. (Austin Hertzog – MediaNews Group)

Putting seniors like Scogna, Karissa Potteiger, twin sisters Ali and Lexi Wescott and Madison Williams in position for a memorable finish to their high-school athletic careers has been driving Spring-Ford through recent “down” moments: A loss to Boyertown in the Pioneer Athletic Conference’s Final Four playoffs opening round, the 5-2 district-semi setback at the hands of North Penn and a 2-1 loss to Haverford High in the 1-6A third-place game.

Its latest bounceback was Monday’s 11-0 mercy-rule win over St. Hubert’s in the state playoffs’ opening round.

“It’s really nice,” Ashley said. “The seniors want the most out of their final season, and everything is working nice for them.”

“In the district loss to North Penn,” Hughes added, “the girls were down a bit. The opportunity was there, but they didn’t follow through.

“It’s been nothing but fun.”

NOTES >> In prelude to Ashley’s grand slam leadoff hitter Gancasz (single, stolen base) was ruled safe on a play at third off Morgan Lester’s fielder’s-choice hit. The call was appealed by Penn Manor head coach Dave Stokes, but the umpiring crew upheld the call. … Ashley on the favorable wind currents: “We have multiple people that can hit it out. I took the one to right-center, and the wind gave it the oomph.” … Defensively, Ali Wescott (left), Jarrell (center) and Lester (second) also contributed to the Rams’ solid play in the field. Spring-Ford’s Jessica Fliszar delivers to the plate against Penn Manor in a PIAA 6A quarterfinal Thursday at Gov. Mifflin. (Austin Hertzog – MediaNews Group) Spring-Ford’s Riley Gancasz steals second base ahead of the tag from Penn Manor’s Bria Booth during the sixth inning of a PIAA 6A quarterfinal Thursday at Gov. Mifflin. (Austin Hertzog – MediaNews Group)