Oxford rolls into state semis with win over Exeter 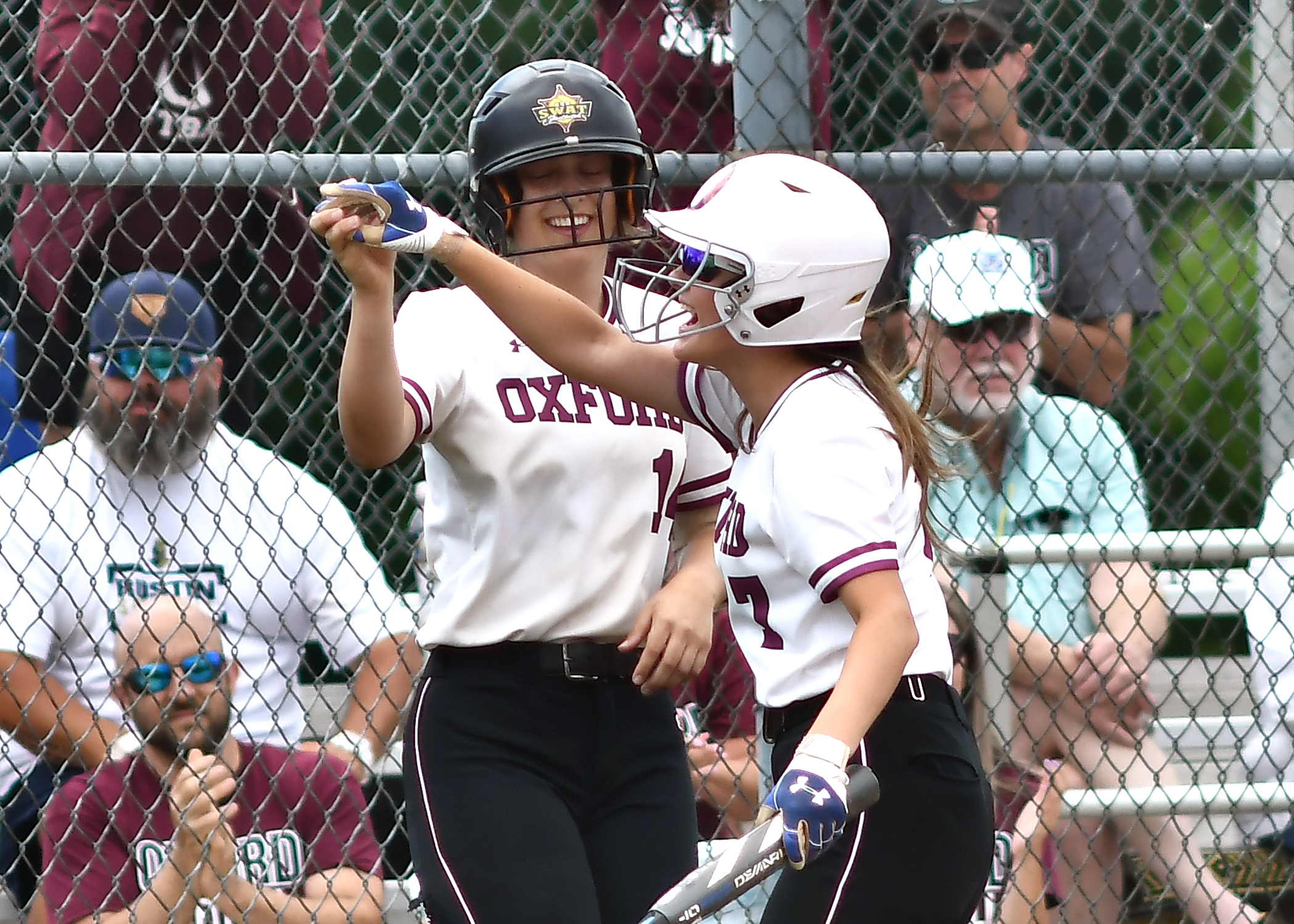 ELVERSON >> The Hornets are certainly peaking at the right time.

Oxford (15-10 overall) was barely treading water in late April, hovering right around the .500 mark, and just squeaked into the district playoffs. But over the course of the last month, the Hornets have been on fire, winning seven of their last eight, with the lone loss coming on a one-run heartbreaker in the District 1 championship game against West Chester Rustin.

With Wednesday’s 7-2 win over District 3 champion Exeter Township, the Hornets are two wins away from a state championship. Oxford advances to Monday’s semifinals, where they will square off against District 2 champ Pittston Area, a 3-2 winner over Lampeter-Strasburg Thursday evening, at a site and time to be determined. “Our athletic director, Mike Price, asked the other day if I saw this coming,” said Oxford coach Josh Socash. “I knew we had a talented group of girls, and the goal was to get to districts and see what we could do.”

The Hornets did get in, with the seventh seed, and opened with a 4-3 nail-biter win over 10th-seeded Pottsgrove.

“That win over Pottsgrove in the first round of districts really boosted our confidence,” Socash said. “Did I see us making it to states? Honestly, no. But we are rolling right now, and playing with confidence.

“We keep playing the way we have, and we can go all the way. I may not have seen it, but I am enjoying every second and couldn’t be happier for these girls.”

The early going was a pitcher’s duel, with the two teams scoreless into the fourth when Exeter took advantage of a couple of Oxford errors to manufacture a run. Oxford answered right back, pushing across three runs in the bottom half of the innings when Ashley Flynn (1-4, R) and Mackenna Frank (3-3, 2B, R, RBI) led off with back-to-back singles, with both coming in to score on a double from Molly Friel. Friel (2-3, 2 2B, 3 RBI) came around to score on a base hit from Gracie Allen. “I was just swinging at the first strike I saw, just trying to make contact and put the ball in play,” said Frank. “We got timely hits all day. It was great to get that lead back. It seems once we get going, we keep that momentum up the rest of the game.” Exeter cut the lead to 3-2 with another run in the fifth, but Oxford responded with a run of their own in the bottom half on an RBI single from Frank, and three more in the sixth, when Hannah Aker knocked in CeCe Figueroa (1-3, 2B, R) and Angela Beadle (1-3, 2B, R), and came in to score on a single from Natalia Donofrio. “Our confidence is through the roof right now,” said Friel. “We’re doing things never done before at Oxford. It’s an amazing feeling to be the first to do something, and even more special when you can share that with a team of great friends.”

Figueroa picked up the win in the circle, going the distance. The Hornet ace, while not overpowering, was the model of efficiency. Figueroa allowed three runs (two earned) on five scattered hits. She didn’t strikeout a hitter, but only issued one base on balls.

So the Hornets’ Cinderella post season run has yet to reach midnight, and will extend into next week.

“Who would have thought Oxford softball would still be playing in June?” asked the Hornets’ lone senior, Akers. “I’ve already graduated, and we’re still playing softball. It’s crazy to think we’re here, but we’re all having so much fun and I don’t want to see it end.”