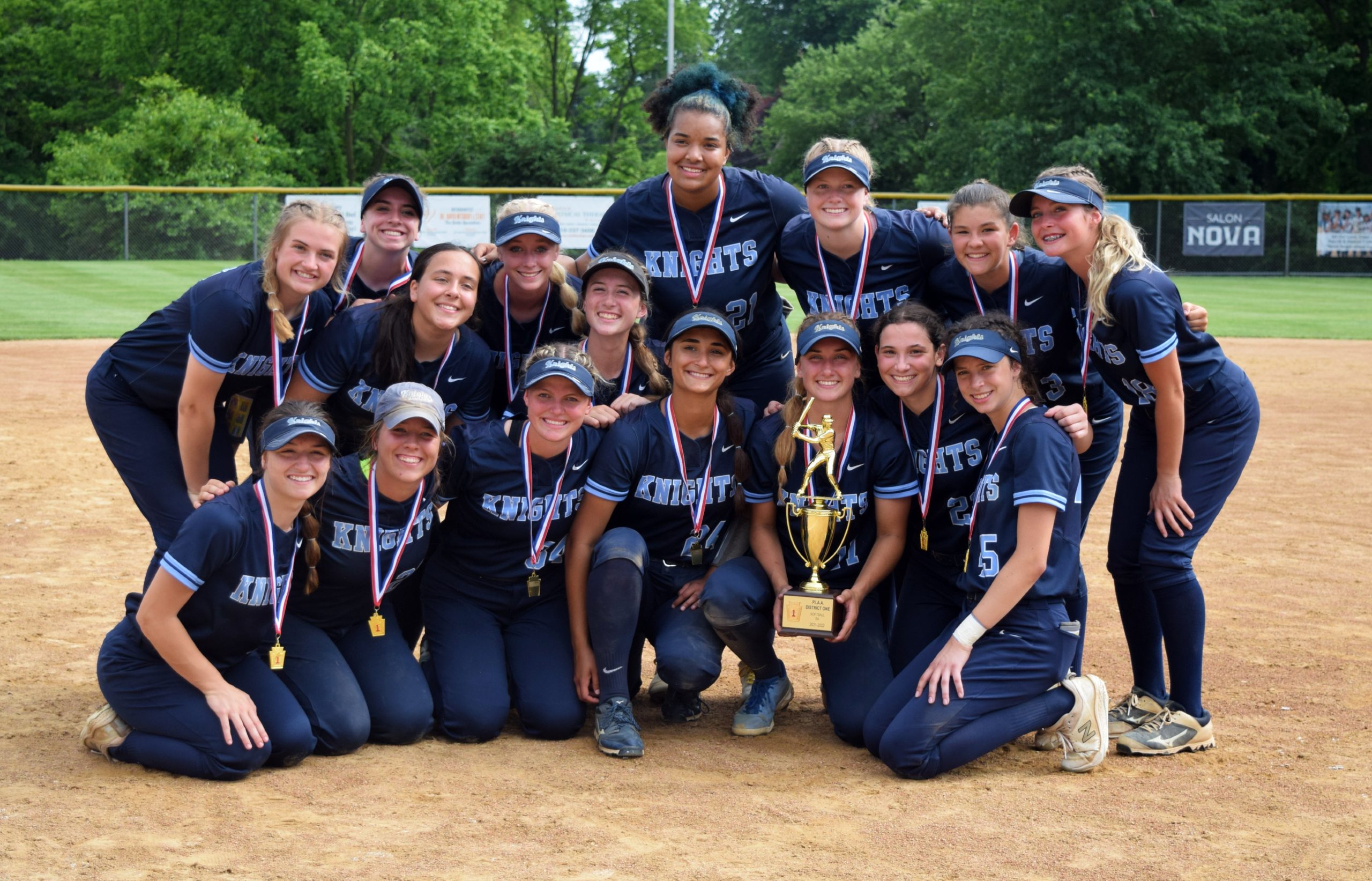 North Penn pose with the District 1 championship trophy after winning the 6A title over Pennsbury Thursday, June 2, 2022 at Spring-Ford. (Austin Hertzog - MediaNews Group)

UPPER PROVIDENCE >> After watching her hit sail over the center-field fence, Julia Shearer could not hold in her excitement.

“Off the bat I had no idea where it was going and then I saw it went just over the fence, I was screaming around the bases,” the North Penn junior said. “To put us ahead like that, it really meant something to me.”

After top-seeded Pennsbury jumped out to a 1-0 lead in Thursday afternoon’s District 1-6A softball championship game, the Knights answered with a pair of solo home runs – Gianna Cimino tying it in the second with Shearer’s shot putting No. 3 North Penn up 2-1.

“G’s home run, you could see it, it set them right down,” Knights coach Rick Torresani said. “They had to work for theirs, she comes up and puts it whatever that is out there. And then Julia hits one over.”

It was still a one-run North Penn lead when weather halted the contest at the end of sixth inning. But when play resumed in the top of the seventh, the Knights produced three insurance runs and held on to secure their first district title in a decade with a 5-2 victory at Spring-Ford. Shearer finished 3-for-4 with an RBI and two runs scored while the Maryland commit also struck out 10 in pitching a complete game as North Penn (23-1), the defending PIAA champion, earned its first District 1 crown since winning the 2012 Class 4A title. The Knights had lost in their two previous district final appearances in 2014 and 2019.

North Penn also avenged its lone defeat of 2022 after the Falcons (22-2) won their first meeting 5-4 in nine innings at North Penn April 29.

“Coming into this knowing that they were the only ones that had beaten us, we said it’s payback time,” Shearer said. “We wanted to come back and just do to them what they did to us and I think we were pretty successful in that.” North Penn, which has won its last 11, begins the state 6A tournament Monday against District 11 runner-up Whitehall.

“I feel great going into states,” Cimino said. “I feel like we’re going to do really good if we just keep playing North Penn softball.”

Pennsbury, which had a 14-game win streak snapped as it was denied its first district title since 2007, takes on District 3 runner-up Manheim Township in the PIAA first round.

“We knew it was going to be a close game,” Falcons coach Frank McSherry said. “It’s a one-run game up until the seventh inning. Two good teams, two good pitchers, two good hitting teams and they had a bigger inning than we had, that’s what it came down to.” Shearer allowed two runs – both earned – on six hits and two walks over her seven innings in the circle.

Pennsbury starting pitcher Ainsley McClure took the loss in a complete-game effort, giving up five runs – all earned – on six hits. She walked three and struck out seven.

The Falcons took a 1-0 lead in the bottom of the first. Quinn McGonigle hit a one-out single, stole second then scored as Sam Raub dropped a two-out RBI single into left field.

Cimino answered for the Knights with one out in the top of the second, belting a solo homer to left to knot things 1-1.

“I knew she was going to throw me a high pitch for the first pitch because that’s how she got me last time,” Cimino said. “But I was just looking for my pitch and I just took it.”

Shearer connected on her go-ahead solo blast to center with two outs in the third.

“Going into this we had a plan we knew what she was going to throw to us and as the game went on we worked with that,” Shearer said. “As for me, my first at-bat did not go well and I adjusted – I adjusted, I knew what was coming and I just sat on it and it worked.” Rowan Mulholland led off the Pennsbury half of the fourth with a single then went to second on a Raub sacrifice bunt. But Shearer stranded her there with a strikeout and a groundout back to the pitcher.

With two outs in the top of the fifth, Reyna Doherty singled then advanced to third as Shearer’s pop-up fell in the middle of the infield for a base hit. Shearer stole second before Sarah Sabocsik walked to load the bases but McClure struck out the next batter to keep the Falcons down 2-1.

After Shearer collected a strikeout to end the sixth and strand a runner on second, a lightning delay halted the game with rain then rolling through the area. But the weather cleared and when the matchup resumed in the seventh, the Knights proceeded to stretch their lead to four. Pennsbury first baseman Quinn McGonigle (9) celebrates with Laney Freiband after scoring a run in the first inning against North Penn during the District 1-6A softball championship Thursday at Spring-Ford. (Austin Hertzog – MediaNews Group) Doherty drew a one-out walk with Shearer following by lining a single into left. Sabocsik singled up the middle to bring home Doherty to make it 3-1. Shearer went to third on the hit while Sabocsik advanced to second on the play.

Annabelle Smink’s RBI sacrifice fly to right scored Shearer while Sabocsik, who advanced to third on the sac fly, came home on a wild pitch for a 5-1 Knights advantage.

Presley Foote’s RBI infield single cut Pennsbury’s deficit to 5-2 and gave the Falcons runners on first and second with one out in the bottom of the seventh. But a force out at third on a fielder’s choice then a groundout to second sealed the district crown for North Penn.

“Honestly, I wasn’t really warmed up as good as I should have been,” said Shearer of the seventh. “But I trusted my defense, I was working with it and it ended up working in our favor.” North Penn catcher Sarah Sabocsik smiles on second base after driving in a run in the seventh inning against Pennsbury during the District 1-6A softball championship Thursday at Spring-Ford. (Austin Hertzog – MediaNews Group) North Penn second baseman Gianna Cimino is congratulated by teammates after hitting a solo home run during the second inning against Pennsbury during the District 1-6A softball championship Thursday at Spring-Ford. (Austin Hertzog – MediaNews Group)

NOTES >> On the game’s first at-bat Pennsbury shortstop Cait Martell was hit in the hand swinging at a pitch but the Shippensburg commit played the rest of the contest. “I had her in Carpenter Cup, I love her to death,” said Torresani of Martell. “She gutted it out, did everything she possibly could to help her team.”… North Penn is making its fourth consecutive PIAA postseason, reaching the quarters in 2018 and 2019 and winning state gold in 2021. Pennsbury qualified for its third straight PIAA tournament, advancing to the semifinals last season.