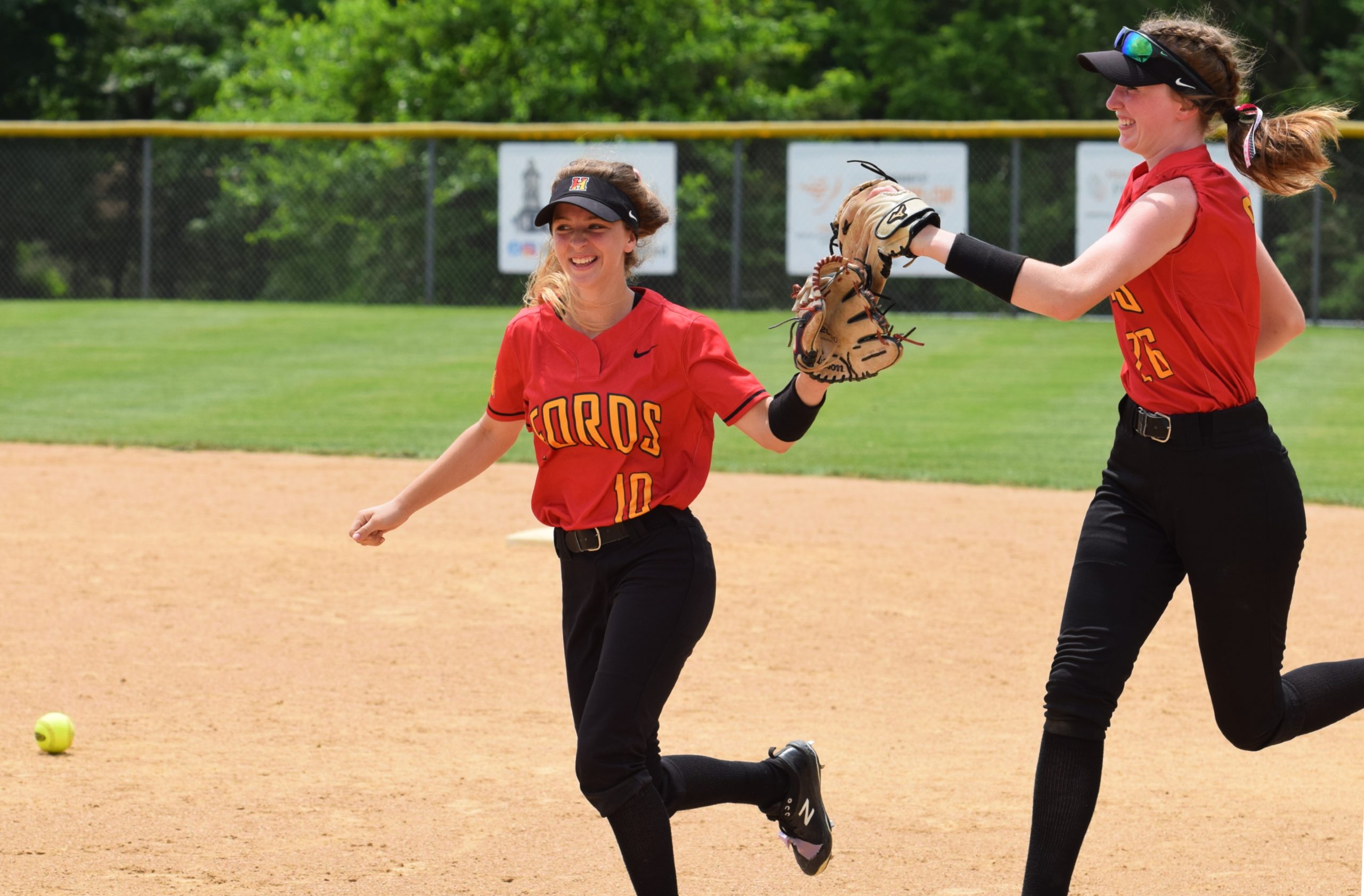 Haverford outfielder Sarah Hubley (10) is congratulated by teammate Madie Culbertson after an inning-ending catch against Spring-Ford during the District 1-6A third-place game Thursday at Spring-Ford. (Austin Hertzog - MediaNews Group)

UPPER PROVIDENCE >> It basically served as a seeding game for the upcoming PIAA Class 6A playoffs. But there was much more up for grabs by Spring-Ford when it hosted Haverford High in Thursday’s District 1-6A third-place game.

The Rams were looking to repay the Fords for ending their 2021 state run after they won a district championship. They also wanted a memorable day for their senior players, who were closing out their scholastic time on their home field.

But Haverford had its own ideas and ultimately came away with a 2-1 victory at Ram Park to enter the PIAA tournament on a winning note.

The second-seeded Rams (20-3) were handled by Ford pitcher Emma Taylor, who worked a one-hit shutout on the locals through the first five innings. Taylor went on to limit Spring-Ford to four hits, an earned run in the sixth, one walk and 10 strikeouts.

The Rams countered with Jess Fliszar, called on to pitch while normal starter Jules Scogna continues recovering from cramps she sustained during Tuesday’s semifinal-round game with North Penn. She yielded Haverford’s runs in the third and fourth innings, with seven hits and two walks against seven strikeouts.

Hughes noted Fliszar, who relieved Scogna in the seventh inning of Tuesday’s loss to the Knights, has started selected games for the Rams this spring.

“For Jess, it was an opportunity to get some innings,” he added. “She’s come along well.”

Among other tweaks to the Rams’ lineup were Karissa Potteiger, the regular catcher, playing second with Ava Bainbridge working behind the plate.
Fourth-seeded Haverford got its first run in the third when Taylor singled up the middle, scoring Kylie Ingram (safe on error). Its ultimate game-winner came when Grace Ciochetto (single) beat the relay throw to home plate off Madie Culbertson’s hit to third.

It ended up being sufficient for the Fords, the Central League’s champions the past two years, to go into states as the third seed … the third year in a row they qualified for PIAA play. The state’s 2021 6A runners-up to North Penn — they had 10 seniors graduate from that team — will open states Monday against either the District 2 or 4 champion.

“We brought them (current players) along for the ride to Penn State,” Newman said. “They said it was a lot more nerve-wracking watching than it was playing.”

Spring-Ford’s lone run came off a walk to Potteiger, who advanced to second on a wild pitch before scoring off Lexi Wescott’s double to left-center. Wescott, speaking for her teammates from Spring-Ford’s Class of 2022, described the day as “bittersweet.”

“We wanted to go out with a bang,” she said. “Even though we lost to them, we gave it our all.”

Wescott’s twin sister, Ali, remembered some of the memorable moments forged on the field — among them the 2021 district title won there with a 5-0 victory over Neshaminy.

“There were so many memories on this field,” Ali added. “We were trying to create one last one.”

For Spring-Ford, led by Caitlin Ashley’s 2-for-3 showing at the plate, the recent lineup manipulations serve as an opportunity for players to become adept at other positions.

“It’s a good sign to have a conglomerate of kids who can do that,” Hughes said.

The Rams will open states against District 12 champion St. Hubert’s Monday, at a site and time yet to be established.

NOTES >> Scogna did get the opportunity to be on the field for her final home game. She threw one pitch to Haverford leadoff batter Ingram before Fliszar took over. … The Rams’ defense was highlighted by several big plays. Center fielder Ellie Jarrell made a big backward run to snare a long fly ball by Shannon Gavigan for the third out of the fourth, Gracie Carlin speared a liner to third from Kerri McCallum in the fifth, and first-baseman Maddie Williams converted a pair of foul pops into the first two outs of the seventh.