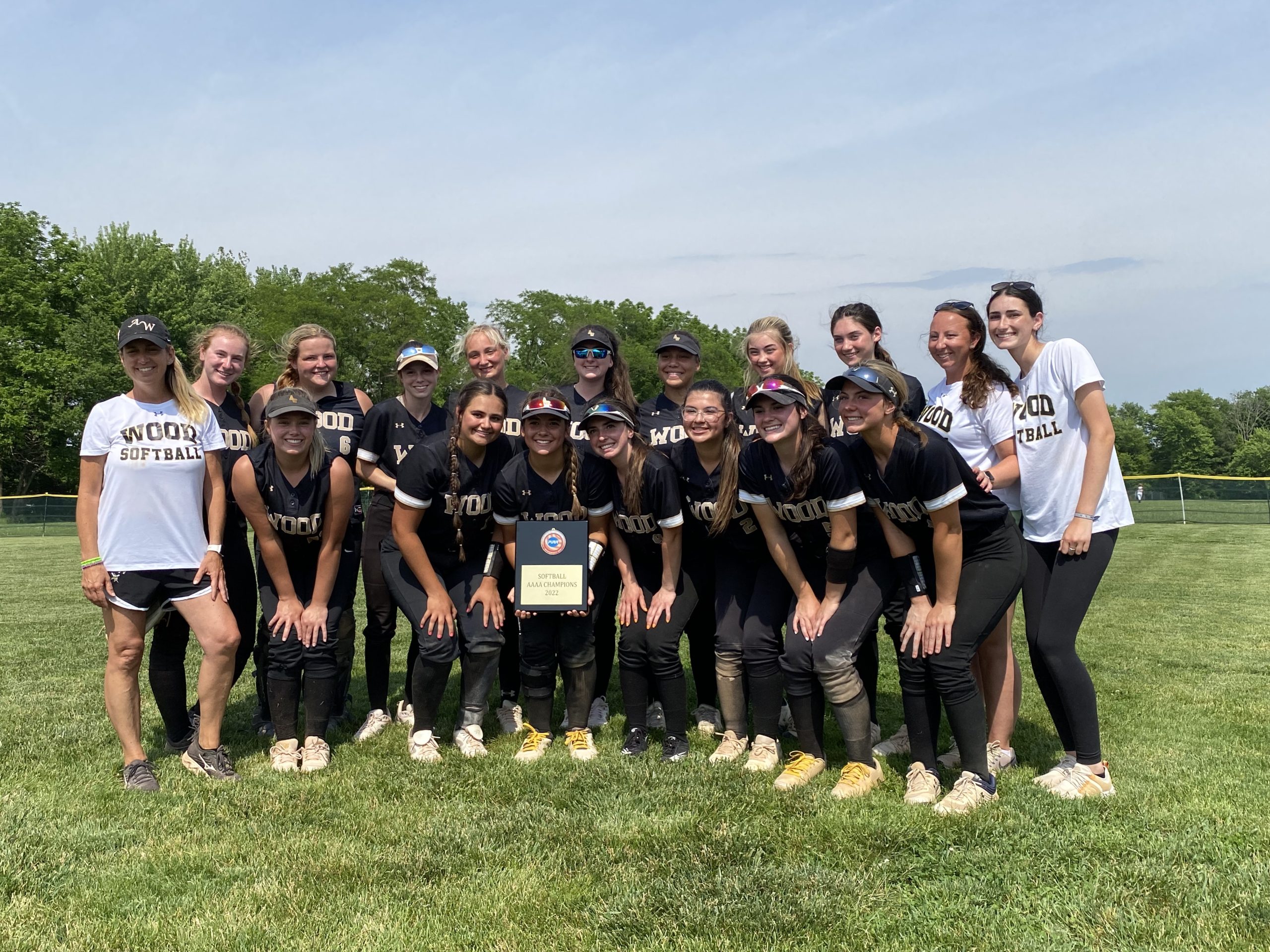 The Archbishop Wood softball team takes a photo with the District 12 trophy after winning the District 12 Class 4A title with a 14-0 victory over Science Leadership Academy on Wednesday, May 1, 2022. (Mike Cabrey/MediaNews Group)

WARMINSTER >> Gianna Anzideo has a definite preference for what kind of pitches she wants to see when she is at bat.

“I like a little more speed obviously,” the Archbishop Wood senior said. “I think everybody does.”

Wednesday afternoon, however, Anzideo and the Vikings softball team had to figure out the slower velocities offered by Science Leadership Academy pitchers in the District 12 Class 4A championship game.

“We knew it wasn’t going to be what we were used to so all practice yesterday and the day before that’s all we practiced was changeups,” Anzideo said. “We just have to adjust in the box and adjust to your hitting the next at-bat.”

Anzideo finished a pair of singles, going 2-for-3 with five RBIs – the first three on a bases-loaded base hit in the bottom of the third inning then drove in two more as Wood plated seven in the fourth as the host Vikings rolled to a 14-0 five-inning victory.

After claiming their first Philadelphia Catholic League title since 2000 last Monday, the Vikings added their first district crown since 2017 as they head into the PIAA tournament looking to earn the program’s first-ever state win. Wood faces the District 3 runner-up – either Hamburg or Big Spring – Monday.

“That would mean a lot to us,” Wood junior pitcher Dakota Fanelli said. “We were in states last year and we came close to winning that game and we told all of us, we talked after that state game we said next year is going to be our year to run through states and we’re going to win some games next year. So that’s definitely what we’re going to plan to do.”

The Vikings have lost their opener in each of their four previous trips to states, last season as District 12’s third seed falling 3-2 in eight innings to Bethlehem Catholic.

“This is like our payback state game,” Ecker said. “We had them last year and unfortunately it didn’t go our way but we’re ready and that’s the goal, the goal is to win the PCL and to get to states and so far so good and we’ll see how they make out. I have faith.”

Maura Yoos was 2-for-3 with a double and two runs scored while Fanelli struck out the first six batters and totaled 12 strikeouts in throwing a five-inning no-hitter.

“Just something fast, they didn’t like the fast motion of my pitch,” she said. “And that’s what I kind of banked on today.”

The PCL Pitcher of the Year was close to a perfect afternoon in the circle, retiring the first 14 SLA batters she faced before the Rockets got their only baserunner on with a two-out error in the top of the fifth. Wood threw the runner out trying to steal second to seal the win.

“You have those plays and it happens to the best of us,” Fanelli said. “I know I’ve had that same play happen to me and at the end of the day we still won and that’s what matters so I just chalked it up as a great win.”

The Vikings took a 1-0 lead in the bottom of the first as Yoos scored when Fanelli reached on a two-out error.

Wood went up 3-0 with a pair of runs in the second. A Riley Nolan leadoff single to right, a Maggie Devlin walk and Anzideo reaching on an error loaded the bases with no outs. Nolan came home on a wild pitch while an Elizabeth James groundout plated Devlin.

“I think after the first inning we were talking about right-side approach, trying to hit it, trying to get late enough to get to the right side,” Fanelli said. “And I think that worked for us through the second inning cause then we started getting the bats on the balls.”

A four-run third stretched the Vikings’ advantage to 7-0.

Yoos started the bottom of the inning with a double to left then scored as Parker Kraus bunt to the left side of the infield for an RBI double.

A Fanelli walk and Paige Ross getting hit by a pitch loaded the bases. After consecutive strikeouts, Anzideo knocked a two-out single up the middle to bring in all three runners.

“I knew it was slow so I just had to wait back and drive it,” Anzideo said.

After a Krystal Slifer RBI single, Anzideo pushed the margin to 13 by connecting on a two-RBI single. Alyssa Miller’s RBI infield single extended the lead to 14-0.