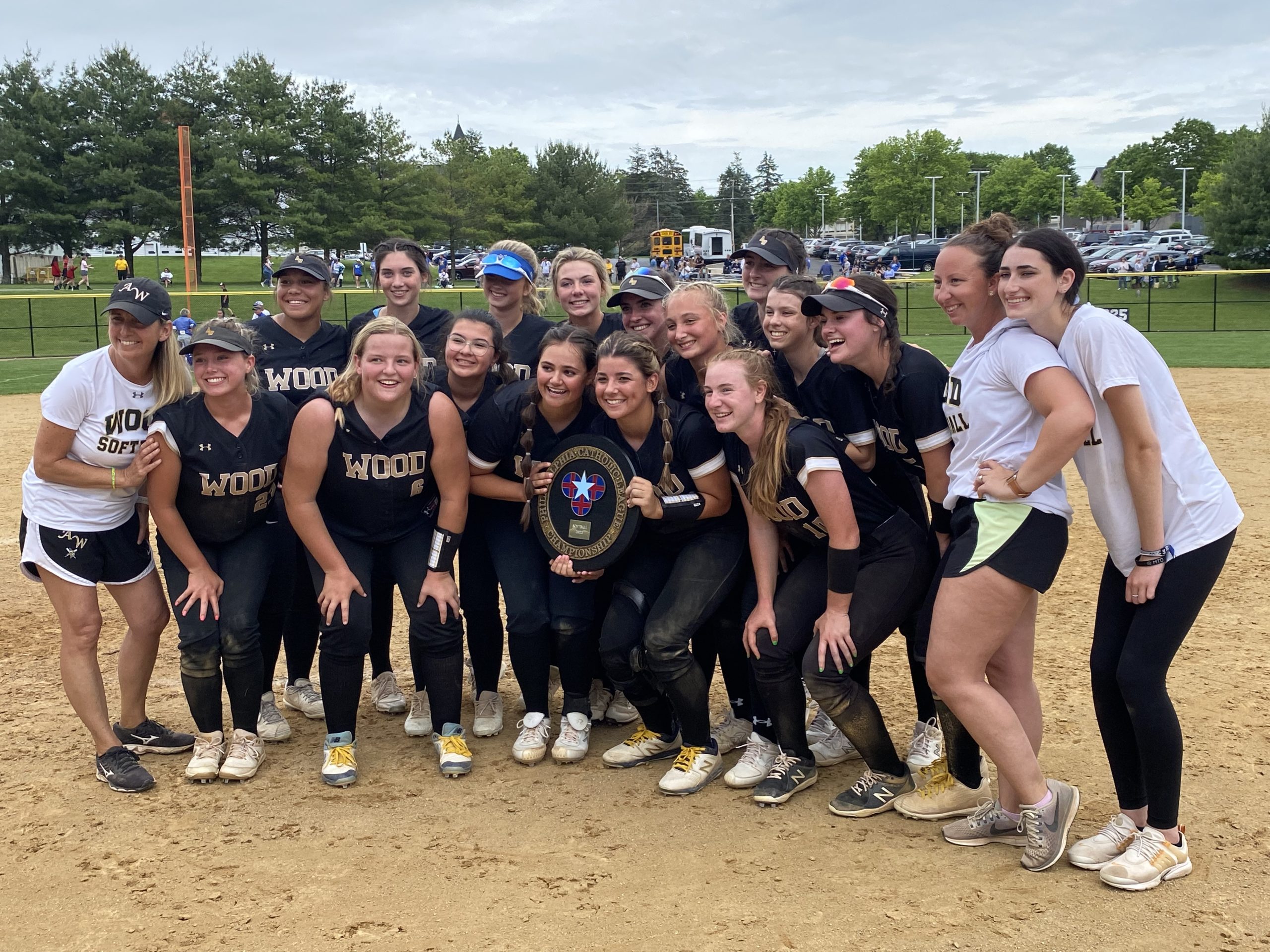 ASTON >> Stepping up to the plate in the bottom of the seventh inning with the bases loaded and the Philadelphia Catholic League softball final tied, Dakota Fanelli felt the moment’s pressure but also knew Archbishop Wood was one swing away from a title.

“It was nerve wracking,” she said. “But I knew there were zero outs. So even if I did get out my team would of had my back and we would of got it in anyway.”

Fanelli, however, was all Wood needed as the junior pitcher connected on a ball to right field that the incoming right fielder dropped, the error allowing pinch runner Maya McGrory to score and give the No. 3 seed Vikings the PCL championship with a 3-2 walk-off victory over No. 4 Conwell-Egan Monday at Neumann University’s Bruder Softball Field.

“Dakota’s come in clutch all season long – on the mound, at the plate,” Wood coach Jackie Ecker said. “She just knows, hit the ball right side even if it’s a fly ball she knows that that’ll get the runner in. So proud of her.”

#SOFTBALL: Final PCL Championship @Wood_softball 3, Conwell-Egan 2. Dakota Fanelli’s bases-loaded hit to right is dropped for an error and the Vikings claim their 1st PCL title since 2000 with a 3-2 walkoff win. pic.twitter.com/16OvA2KzFq

Fanelli was 2-for-4 with an RBI single that pulled Archbishop Wood even 2-2 in the fifth and pitched a complete game to help the Vikings rally twice from one-run deficits to earn their first Catholic League crown since 2000.

“Just from the past two years that we’ve had we’ve been through a lot – injuries, everything and then to come back from this year and be able to win it all is just unreal,” Wood left fielder Abby Windish said.

Windish led off the bottom of the seventh with a single to left then advanced to third as Maura Yoos raced down the line for a bunt single – Yoos taking second on the play to give Wood runners at second and third and no outs.

Archbishop Wood’s Abby Windish (00) raises the Philadelphia Catholic League championship trophy in celebration after the Vikings’ 3-2 win over Conwell-Egan in the league final on Monday, May 23, 2022. (Mike Cabrey/MediaNews Group)

Conwell-Egan elected to intentionally walk Parker Kraus to load the bases for Fanelli, who provided an opposite-field fly to right that resulted in the error to bring home McGrory, who took over for Windish at third.

“I didn’t know she dropped it until I was safe,” Fanelli said. “Either way I think she would of got home. We had an amazing runner Maya on third base and I knew she was going to do the job and she did it.”

Kraus and Maggie Devlin both went 2-for-3 while Windish finished 2-for-4 as the Vikings won their last eight games in PCL play – the final three in the playoffs after starting 2-2 before a 5-4 eight-inning victory over Conwell-Egan in their first meeting April 26.

“They never give up,” Ecker said. “We have stuck together from the get-go, from the beginning of the season when it was super cold and we came out, lost two games in the PCL right away. From then on, they just pushed and they did it. They did it – so proud.

Fanelli gave up two runs – both earned – on nine hits in seven innings. She walked three and struck out three.

“Curveball and the riseball and the changeup sometimes but that was just to get them off their toes cause they’re great hitters,” Fanelli said. “And if they only see fast they’re going to hit the ball.”

#SOFTBALL: End 5 @Wood_softball 2, Conwell-Egan 2. Wood ties it with a 2-out rally B5, Dakota Fanelli lining an RBI single up the middle. pic.twitter.com/B0rstm0Ojs

Angelina Bresnen was 2-for-3 with a double, RBI and a run scored for Conwell-Egan, which lost in the PCL final for the second straight season. Cecilia McBeth went 2-for-4 with a double and a run while Molly Milewski was 2-for-3.

The Eagles grabbed a 1-0 lead in the top of the first as Bresnen scored on a wild pitch then regained the advantage 2-1 on Bresnen’s RBI sacrifice fly in the fourth. But Conwell-Egan left 12 runners on base in coming up short of its first league title since 2007.

“We struggled really moving runners and getting the key hit,” CEC coach Sandy Hart said. “We struggled a little bit. But hats off to them because they’re a good team and they did execute.”

Conwell-Egan starting pitcher Ahlana Sesar took the loss despite throwing a solid six-plus innings, allowing three runs – one earned – on 10 hits, walking one and striking out one.

Both teams advance to District 12 championship games in their respective classes – Wood in 4A, Conwell-Egan in 2A.

The Archbishop Wood softball team takes a selfie with the Philadelphia Catholic League championship trophy after the Vikings’ 3-2 win over Conwell-Egan in the league final on Monday, May 24, 2022 at Neumann University (Mike Cabrey/MediaNews Group)

Bresnen started Monday’s contest by doubling off the fence in left. Bresnen went to third on Cassidy Blaskop’s sacrifice bunt then scored on a wild pitch on the next at-bat to make it 1-0 Conwell-Egan in the top of the first.

The Eagles had runners at the corners after a Katey Brennan double to right center and Lauren Bretzel’s two-out walk but a force out at second on a fielder’s choice kept Wood down just a run.

“The first inning kind of hit our whole field hard,” Fanelli said. “But I think when we got in the dugout we talked about it and I think we changed what we needed to change. And me and my coach, Coach Maeve [McGill], we talked what pitches was working and what was not and I think that’s what kept us in the whole game.”

The Vikings knotted things 1-1 in the bottom of the third with some heads-up baserunning.

Riley Nolan led off by dropping a single behind second base then went to second on Elizabeth James’ sac bunt. Windish lofted a single over the third baseman that trickled into left. Windish then inched her way towards second on the play and Conwell-Egan tried to catch her in a rundown but Nolan broke for home, sliding in to beat the tag.

#SOFTBALL: End 3 @Wood_softball 1, Conwell-Egan. Vikings pull level B3 on a crazy play: Windish drops a single just over 3B then gets caught in a rundown which allows Nolan to score from third. pic.twitter.com/DvoB95LZSU

The Eagles, however, regained the advantage in the top of the fourth. McBeth led off with a double to right center. Milewski rippled a one-out single off the third baseman with the ball hitting off the umpire to keep it in the infield. With runners on the corners, Bresnen plated McBeth to make it 2-1 with an RBI sac fly to deep center.

“Their lineup is full of hitters,” Ecker said. “And we knew they were going to attack but we had to kind of work around them.”

Archbishop Wood got back on level terms with a two-out rally in the bottom of the fifth. An error on Yoos’ two-out bunt allowed Yoos to reach second. Kraus followed with a bunt single to put runners on first and third for Fanelli, who flared a ball through the middle for an RBI single, tying the contest 2-2.

“We knew as long as we got our bats going that that would be our game,” Windish said. “They’re a really good hitting team and they came out firing but we had a good response and we stayed level headed and we stayed in the game and I’m really proud of everybody for staying in when we’re down the whole time.”

In the top of the sixth, consecutive one-out singles by Milewski and Bresnen then a Blaskop sac bunt gave the Eagles runners on second and third. The next at-bat, Brennan sent a grounder to the left side of the infield but the ball hit the baserunner’s foot, the interference ending Conwell-Egan’s chance to break the tie.

The Eagles put another two on base in the top of the seventh after a Sesar leadoff single and Leanna Bresnen one-out walk. But Fanelli got a foul line out to third then a fly out to center to keep the contest tied 2-2, settling Wood up for its walk-off win in the bottom of the frame.