Leitner strikes out 15, leads Hatboro-Horsham to shutout win over Quakertown 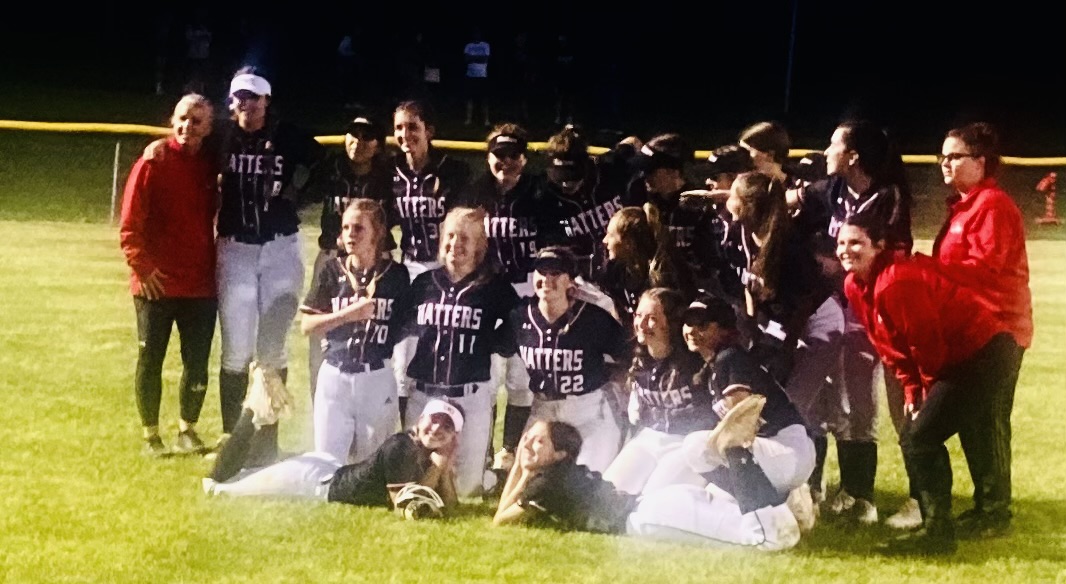 Hatboro-Horsham clinched at least a share of the SOL Liberty with its win over Quakertown on Thursday, May 12, 2022. Kev Hunter, MediaNews.

HORSHAM >> With full confidence in her team and her right arm continuing to work its magic, Hatboro-Horsham’s Kendal Leitner struck out Quakertown’s Carli Maha for the final out of a masterful performance.

“That last pitch was something I don’t think I ever felt before,” Leitner said. “It was just so amazing. I knew that I had my team out there no matter what happens. Even if she hit a home run, I knew that my team was out there – they would even jump the fence. They would do anything. It was just a great moment.”

Leitner racked up 15 strikeouts in leading the Hatters to a 1-0 victory over the Panthers in a Suburban One League Liberty Division showdown Thursday night. Kendal Leitner struck out 15 in a win over Quakertown on Thursday, May 12, 2022. Kev Hunter, MediaNews.

“The whole day, I was nervous,” said Leitner, who struck out the first three batters she faced. “I was like, ‘you know what? This is a big game. Quakertown’s really good.’ And we didn’t wanna lose on Senior Night. Knowing that we got this huge win, it’s just amazing.”

The Hatters came together for a victory that earned them at least a share of the Liberty Division title. Hatboro-Horsham (14-3, 14-1 Liberty) can win the division outright with a win over Upper Dublin on Tuesday. The Hatters also have non-division games against Central Bucks South on Monday and Souderton Area on Thursday.

“This is gonna get us even more hyped up for next week and the postseason,” Leitner said of the win.

In a classic pitchers’ duel, the Hatters broke the scoreless tie in their third at-bat for the lone run of the contest. Hatboro-Horsham leaves the field after its win over Quakertown on Thursday, May 12, 2022. Kev Hunter, MediaNews.

Megan Mills laced a double just inside the left-field line to start things off against righty Syd Andrews. With one out, Alyssa Tooley hit a ground ball and the Panthers tried to catch Mills in a rundown between second and third. Two errors on the play, however, allowed Mills to race home for the go-ahead run.

“We got a runner in scoring position – our one and only – and we got her in,” Hatters coach Kelly Krier said. “We knew tonight it was gonna be a battle from start to finish.

“That was a great game. We knew coming into this that Quakertown (14-3, 13-2 Liberty) is such a strong team. Syd is such a great pitcher. Kendal pitched fantastic. She just put in a great performance. And our defense just backed her up, made big plays when needed.”

Andrews battled through a marathon at-bat in the top of the fourth, coming up with a bloop single. She also stole second, but true to form, Leitner got a strikeout to end the threat.

Leitner retired the side in the fifth and got two outs to start the sixth. Ava Beal then slapped a single for the Panthers, but Leitner struck out Emma Hilton to end the inning. Quakertown huddles after its game with Hatboro-Horsham on Thursday, May 12, 2022. Kev Hunter, MediaNews.

Marissa Rapino made a great grab at short for out number one, and then Leitner capped things off with back-to-back K’s. The senior allowed just one walk and three hits in a shutdown performance.

The Hatters – especially their five seniors – savored a special night under the lights.

“This is such a great group of seniors,” Krier said. “Each of them brings their own strengths to our team. (First baseman) Kelly Cappuccio is the glue that holds us together…(Right fielder) Olivia Baltzer has been our utility player all season. She’s played everywhere for us…(Left fielder) Megan Mills’ double tonight and her base running tonight were just fantastic. She’s been doing that for us all season..Marissa Rapino got us started – she had the first hit in the first inning. And I told her, that gave us the confidence we needed to keep going.

“And then of course, Kendal. I don’t know how many adjectives I have left to describe her. She came tonight ready to play. She hit every spot. She just was awesome from start to finish. She just was in the zone, and we saw it in warmups. So it was just a great night. I’m really happy for all the seniors and I hope they remember it forever.”

Pottstown, Hill School softball come together for ‘Two Teams, One Town’ initiative
Delco Roundup: Marx in charge on the mound in Radnor win