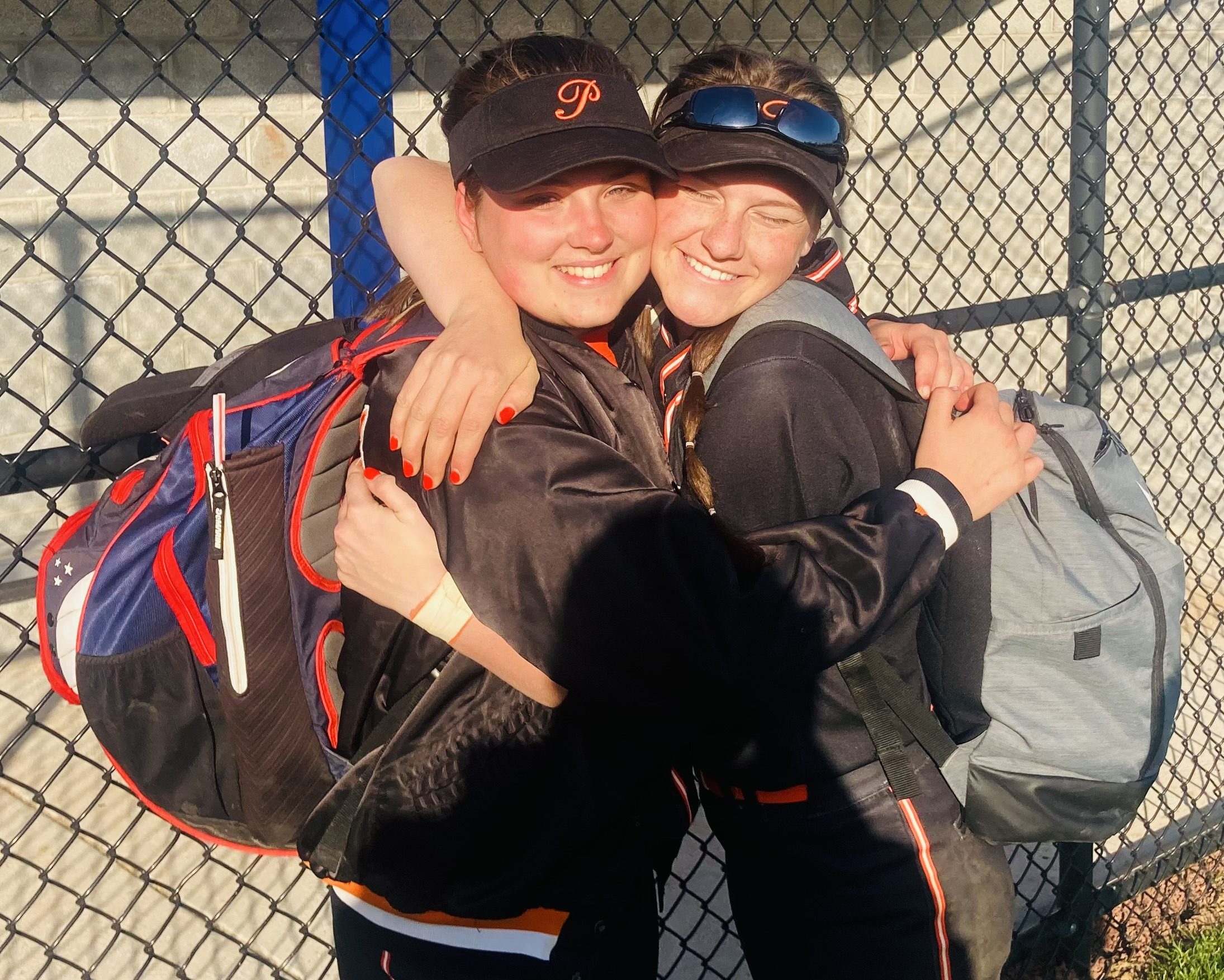 Pennsbury's Ainsley McClure (left) and Quinn McGonigle were key for the Falcons in their win over North Penn on Friday, April 29, 2022. (Kev Hunter/MediaNews Group)

TOWAMENCIN >> It was a back-and-forth slugfest that extended into the early evening.

Pennsbury wouldn’t have it any other way.

“This is the best type of game,” said Falcons pitcher Ainsley McClure after Friday’s nine-inning battle with rival North Penn. “We’ll take this any day. We’ll take a great team like North Penn any day over any 10-run game because this is what softball’s about. It’s that thrill. It’s that fighting tooth and nail. You’re tired but you keep going. That was a long game and we came off of a long week. And kudos to our girls. They left every single piece of themselves out on that field.”

Sam Raub’s single just inside the left-field line scored the go-ahead run for the Falcons in the top of the ninth, and Pennsbury held on for a heart-pounding 5-4 victory over the previously-unbeaten Knights. Pennsbury players look on during their game with North Penn on Friday, April 29, 2022. (Kev Hunter/MediaNews Group)

The defending PIAA-6A Champions came back from deficits of 3-0 and 4-2 to force extra innings, but Pennsbury dug deep one last time.

“This is a special season,” said McClure, who had 11 strikeouts in the victory. “This is one that’s gonna go down in Pennsbury history simply because our girls have never played harder and they’re putting everything out on the field. This is the year.”

North Penn is now 12-1 on the season and is at Truman Monday. Pennsbury is also 12-1 now and will be at Neshaminy Friday.

The Knights rallied back, but they were hampered by four costly errors in the contest. “I told the girls that in order for us to compete at the level we wanna compete at, we can’t make those errors,” Knights coach Rick Torresani said. “We have to play our ‘A’ game. We can’t just walk through the game expecting to continue what we we’ve been doing. I just don’t think we were mentally ready to play this game.”

It was a matchup of two Suburban One League and District One powers: the Knights came in leading the Colonial at 8-0, with the Falcons occupying the top spot in the Patriot at 9-0.

That was the only earned run Shearer (12 K’s) would surrender.

A combination of NP errors and clutch hitting by the Falcons saw Pennsbury build its lead to 3-0 by the fourth. Laney Freiband smacked a chopper through the left side to score McGonigle and make it 2-0 in the third, and then it was 3-0 in the fourth when Presley Foote reached on an error and scored later on another error by the Knights.

North Penn cut it to 3-2 in the fifth on a two-RBI single by Annabelle Smink and then the Falcons regained some breathing room in the sixth when McGonigle came through with an RBI single to center, making it 4-2. Taylor Askey, who had doubled, came around to score. The Knights went long twice to tie it.

A solo shot in the sixth by Gianna Cimino drew NP closer, and then No. 9 hitter Reyna Doherty belted a home run to center to deadlock things at four apiece in the seventh.

The ninth would belong to Pennsbury.

“Every single girl came out here with her whole heart and said, ‘you know what? Let’s play. Let’s play to win,'” said McGonigle, who, along with Martell, reached base four times. McGonigle led off the ninth with a single to left.

Another error by the Knights made it first and second and no outs.

Raub came through again, lacing a single down the left side to push the go-ahead run across.

“We really just needed a run in that last inning. So I was really hoping for a hit – anywhere,” she said. “Just score a run. And that’s what we were all looking for.”

Shearer struck out three in a row to keep it at 5-4.

But Pennsbury closed it out. With two on and two outs in the bottom of the ninth, McClure got Sarah Sabocsik to pop up, with Martell charging in from short to corral it.

“This game belonged to the girls on the bench, the girls in the field, people pitching, the girls hitting,” said McClure. “It belonged to every single person equally because we put our all in it.”