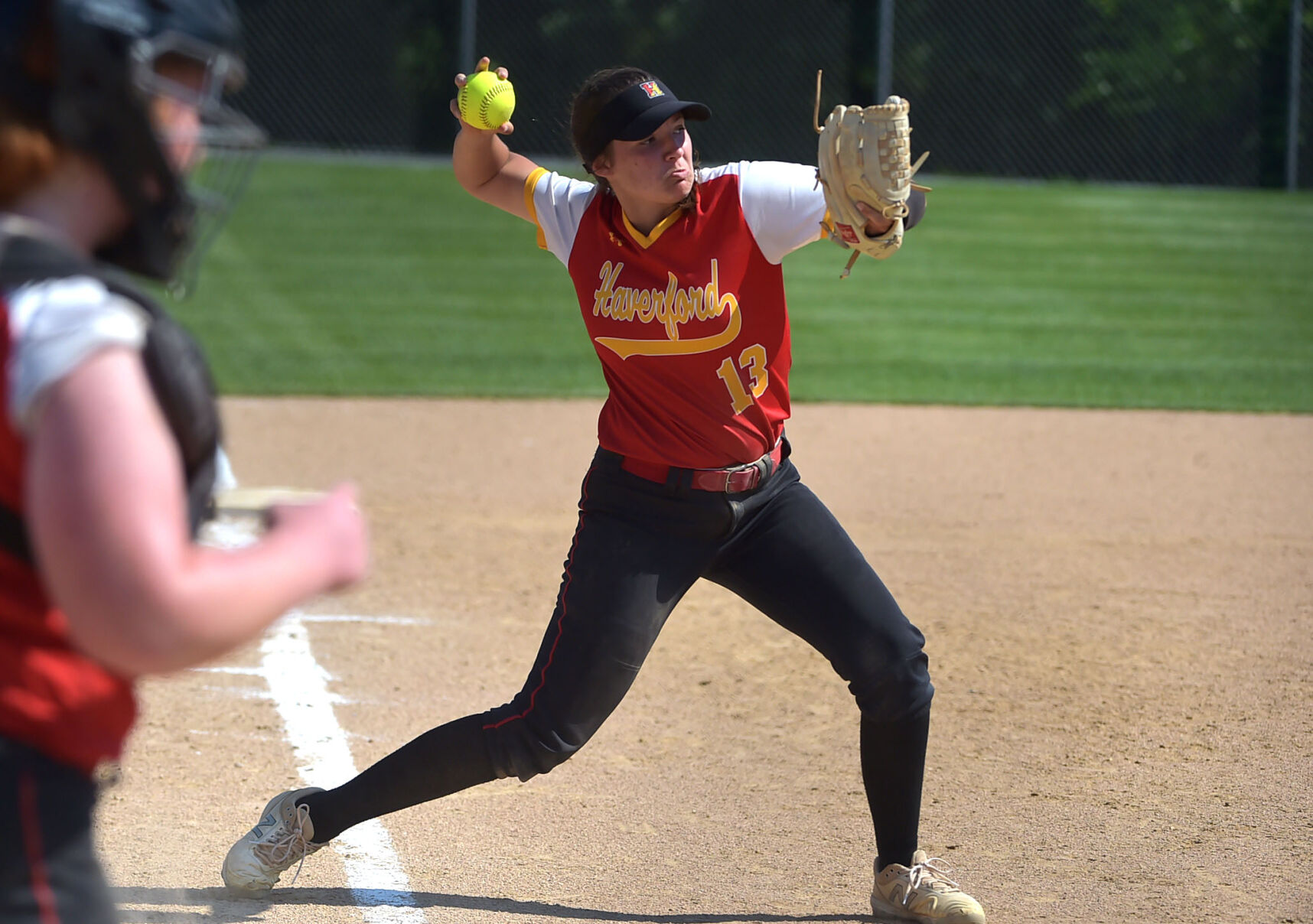 Haverford’s Kerri McCallum, seen in a game last season, provided the RBI base hit to get Haverford’s offensive going in a come-from-behind 4-3 win over Garnet Valley Monday. (DFM File)

That was the case Monday when Haverford hosted Garnet Valley.

Ultimately it was the Fords, last year’s PIAA Class 6A runners-up, who exited with the unblemished record, bouncing back from a three-run deficit to secure a 4-3 victory over the Jaguars.

Emma Taylor, the reigning Daily Times Player of the Year, got stronger as the game wore. She struck out 10 of the last 11 Jaguars she faced, striking out the side in the seventh inning. Taylor finished with 15 Ks.

“A few too many walks in the beginning,” said Taylor, who issued four bases on balls. “But I was right on the corners, so I knew it was just little adjustments. My speed and spin were good for the rest of the game, and I got more comfortable as time went on. I think I picked up on the team’s energy, too. In the bottom of the third when we started scoring, we really picked up the energy. And the energy is contagious.”

That energy added a couple of MPH to the already lethal fastball of Taylor, who allowed just four hits (two infield hits) and didn’t allow an earned run.

The game didn’t start well for the Fords (4-0). Eliz O’Connor worked a walk to lead off the second inning, advanced to second on a passed ball and took third on an error that freshman Zoe Rogers, who went 2-for-3, reached on.

Rogers stole second, and O’Connor and Rogers scoring on a throwing effort off a ball put into play by Maura Coleman for a 2-0 lead.

With two outs, Coleman scored on an error to give the Jaguars (4-1) a 3-0 advantage.

Fords coach Bob Newman was becoming restless. The last time the team had fallen behind like that in a big game was in the state final.

“We didn’t panic,” Newman said. “When we were down, 3-0, I explained to them that (Garnet Valley) had one infield hit and one bunt hit at the time. They hadn’t hit a ball to the outfield. I told them to just go up there and make contact and we’ll make things happen because we know we can hit all the way through the lineup. And that’s what we did.”

The Fords turned the game around in the third inning. Kylie Engram worked Garnet Valley starter Anna Sidlowski for a leadoff walk. Shannon Gavigan singled sharply to right to put runners on the corners.

Kerri McCallum singled home Engram, and Gavigan scored on the throw when McCallum took second. Taylor plated McCallum with a base hit to tie the score at 3.

With two outs, Taylor stole third and scored on the throw to supply the Fords with the lead they wouldn’t relinquish.

The way the game was going, Newman felt it best to be aggressive and call for Taylor to steal third with two outs. Later he kidded it was “better to be lucky than good.”

The Fords were good, as well, as they slugged seven hits. Sidlowski was more effective than her pitching line indicated, with five strikeouts. The Jaguar throwing errors and defensive lapses let her down, something to learn from for a program that aspires to break into the upper echelon of a Central League ruled last year by Haverford and Ridley.

“I think we both had our innings,” Sidlowski said. “Mistakes were made, and they won. I definitely think that it’s not just a set team that will win the Central League. We all have big games left. We all play each other twice. I’m excited to play Haverford again. And I think it’s going to be an even more competitive guy.”

Taylor, the lefty, was devastating down the homestretch. The ball was exploding into the mitt of catcher Meghan Kent. Newman shied away from calling the victory a statement game, despite it being about as big a win as the first full month of the season can provide.

“You don’t want to fall behind,” Newman said. “We know Garnet and Ridley are our main competition for the league like they usually are every year. And we were reading all about Garnet’s pitcher. I mean she was striking out a dozen every game. Seventeen in one game. She really handcuffed us last season at the end of the year. So, we knew coming in this was going to be a battle.”

Taylor felt much the same. To get to where the Fords want to go, they have to beat teams like the Jaguars.

“We’ve shared the Central League with Ridley and Garnet Valley the last couple years,” Taylor said. “And I think this year we really want it for our own. We knew that Garnet Valley would be one of the best teams coming in. We just had a fire inside and wanted to win.”