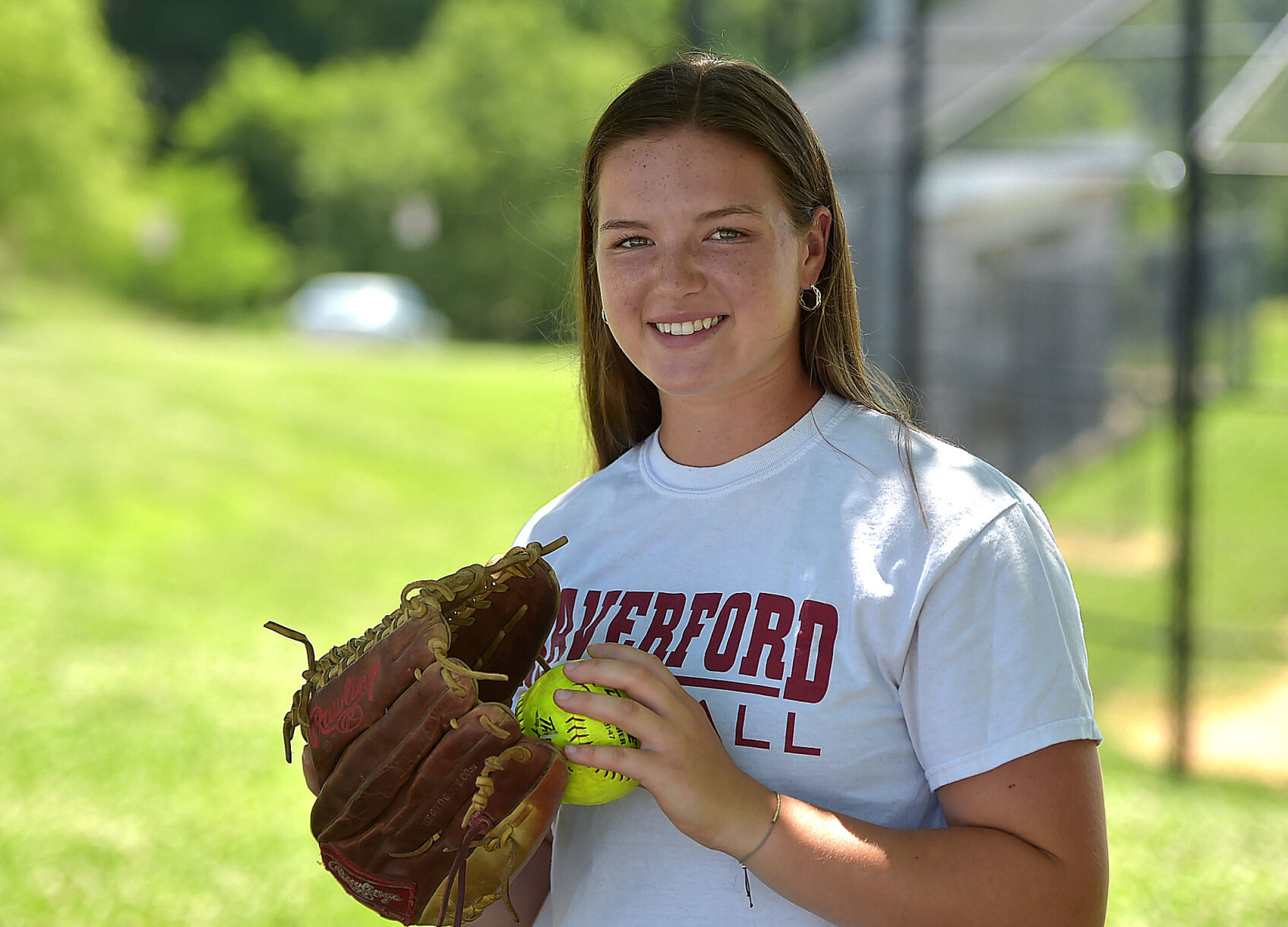 Before she arrived at Haverford High School, Emma Taylor was told she was different than most kids her age.

Taylor was seen as a person mature beyond her years. Smart, caring, and responsible, she had a good head on her shoulders.

It’s no wonder, then, that Taylor emerged as a team leader back in 2019, her freshman softball season. She started and completed the majority of games from the mound that year, helping the Fords win a Central League championship and advance to the state tournament for the first time in program history.

“I’m someone who’s always been told that I act older than I am,” Taylor said. “I guess I’ve done well in that aspect. For me, it was easy to join that huge group of sophomores and the seniors were super fun to play with, too. Their leadership made it easy to play for that team. It was definitely a change to play against so many juniors and seniors, kids who were older than me, but playing for that team my freshman year made it fun and I learned so much playing with them.”

Haverford’s Emma Taylor, in action earlier this season, threw a one-hitter, drove in two runs and scored twice to lead the Fords to a 13-0 victory over Strath Haven on Friday. (Pete Bannan/MediaNews Group)

The coronavirus pandemic canceled her sophomore season, but in 2021 Taylor was ready to go and take the next step, both for her education and softball career.

In November, three months before her junior season, Taylor announced her commitment to Yale, once again proving she’s no ordinary kid. She is a special talent, on the field and in the classroom.

Her junior season was one she will never forget. Taylor was the team’s superstar pitcher, leading the Fords all the way to the PIAA Class 6A championship game. Her greatest moment was hitting a walk-off home run in the state semifinals against Pennsbury.

Those reasons, and more, are why Taylor is the 2021 Daily Times Player of the Year. She is the third Haverford player to earn the honor in the last four years, joining Heather Lazer (2017) and Ali Murphy (2019).

Taylor’s superb pitching and hitting put her in the spotlight in 2021. Because of her maturity, however, Taylor was never deterred by the attention. Even when local news stations came calling after she blasted the winning home run in the state semifinals (and became a Delaware County sports social media star for a few days), Taylor remained focused on preparing for the state final.

Unfortunately, the game didn’t go the Fords’ way. Although Taylor had previously shut down North Penn in the District 1 playoffs, the Knights had her number in the state final. Errors and baserunning mistakes also contributed to the 11-0 setback.

The experience of playing for a PIAA championship at Penn State University, however, is something Taylor will always cherish. The result? So be it. What made Taylor so emotional after the game was the fact she would never again play with such a special group of players. Haverford made school history in 2021, becoming just the third team from Delco to play for a state final in softball, the first in PIAA’s highest classification. Haverford finished with a record of 23-5.

Haverford’s Emma Taylor connects on a walk-off home run that sent the Fords to the PIAA Class 6A championship with a 2-1 victory over Pennsbury Monday at Spring-Ford High School. (Pete Bannan/MediaNews Group)

“As I remember saying after that game, it was more about not being able to play with that whole team again. That was the part that we were most upset about,” Taylor said. “The loss was, well, we hope to face North Penn again next year. We had that other game against them (in districts) which is one of our favorite memories when we did win.”

Taylor was a first-team All-Central League selection and voted team MVP. She pitched to a 1.13 ERA with 204 strikeouts, nine shutouts and 15 complete games. She hit .271 with a .586 slugging percentage, four homers and 22 RBIs.

Off the field, Taylor is a member of the National Honors Society and has done community service in her free time away from softball.

“This year was weird. There was definitely a lot less opportunities for that stuff (because of pandemic restrictions),” Taylor said. She wants to pursue a degree in environmental sciences at Yale.

“I don’t know what I’ll do with it yet, but I hope to pursue a career somewhere in that field,” she said.

But Taylor has a senior year to prepare for. This summer she will be playing softball for the EC Bullets, with whom she will play national tournaments this month in New Jersey, Georgia and Tennessee.

“I’m already thinking about next year,” she said. “We can’t wait to start all over again.”

MOORE: The Kids Are Alright: A fond farewell, and a plea for the future of local news
All-Delco Softball: Chapman, McMenamin led Ridley to share of Central League crown
Loading Comments...
Comment
×