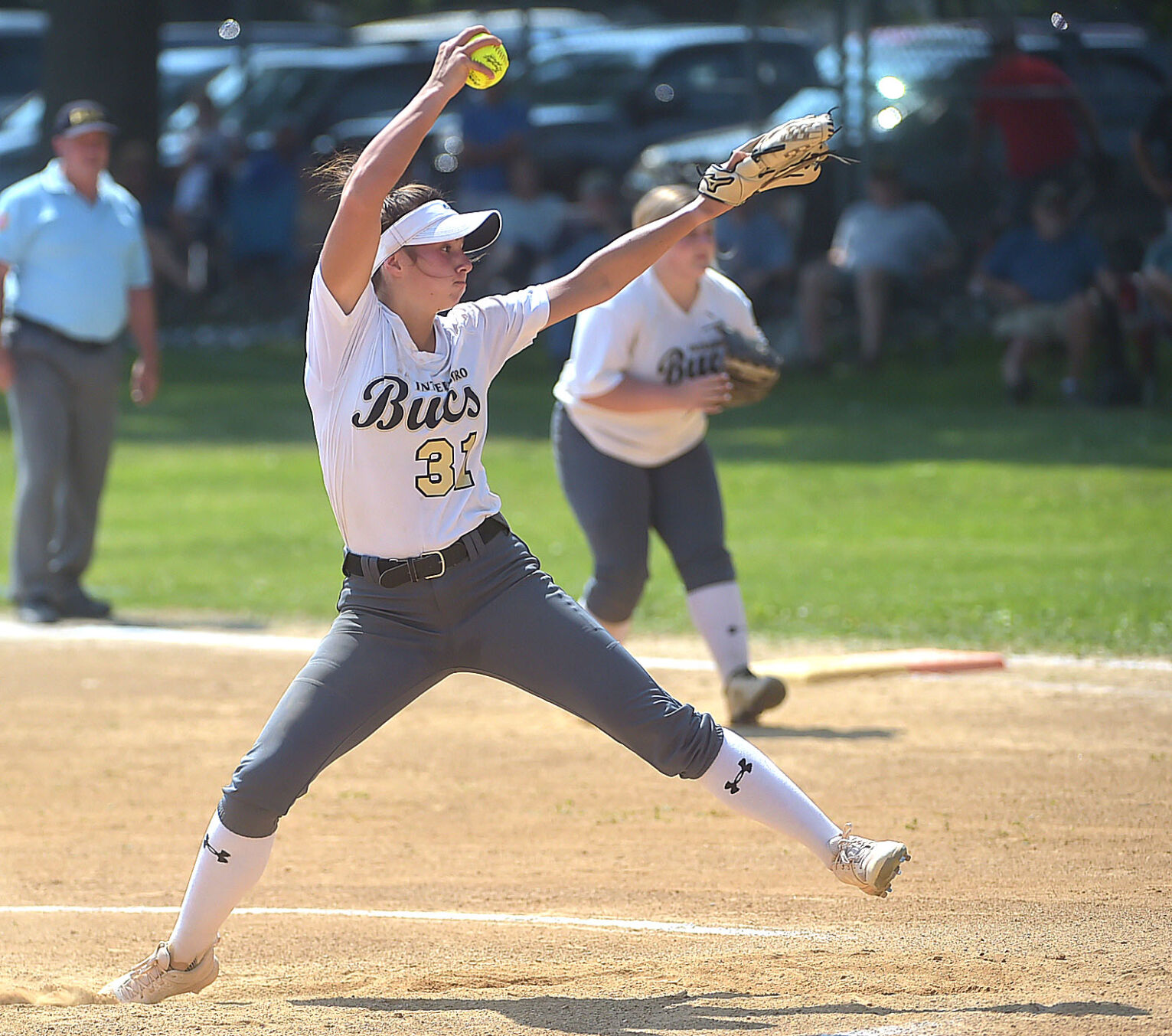 Interboro's Billie Kerwood had a hot start this season for the Bucs, throwing a no-hitter against Garnet Valley. (Pete Bannan/MediaNews Group)

In addition to Haverford’s Emma Taylor, the Daily Times Player of the Year, the All-Delco Softball Team includes:

Emma Tansky, Episcopal Academy: The senior pitcher capped a brilliant high school career as she led EA to an undefeated record in the regular season. A two-time All-Inter-Ac League selection, Tansky recorded a 1.07 ERA and .9 WHIP with 101 strikeouts in 13 games. As the team’s leadoff hitter, Tansky led EA in batting average (.622), on-base percentage (.667), runs (30) and stolen bases (16). She also had four doubles, two homers and 10 RBIs while striking out only three times in 51 plate appearances. Tansky, who was the winner of the school’s Talbot Trophy for excellence in softball, will continue her career at Hamilton College in New York. Billie Kerwood, Interboro: No one was more dominant in the first month of the season than Kerwood. The senior pitcher began the season with a 17-strikeout masterpiece in a no-hitter over Garnet Valley and recorded shutouts in four of her first five starts. With Kerwood electrifying from the circle, the Bucs cruised to another Del Val League title. Thanks in large part to Kerwood’s excellent performances, the Bucs earned the No. 1 seed in the District 1 Class 5A tournament, where they were upset in the second round by Kennett. Kerwood racked up 153 strikeouts in 83 innings and finished with a 1.84 ERA to go with five shutouts. She will pitch at Monmouth University next spring.

Madison Chapman, Ridley: The senior pitcher was at the forefront of the Green Raiders’ success in 2021. In leading Ridley to a share of the Central League title, Chapman notched 112 strikeouts in 73 innings of work. In an early-season battle with Haverford, Chapman twirled a four-hitter with seven strikeouts in a 2-1 victory. She guided Ridley to the second round of the District 1 Class 6A tournament. At the plate Chapman swung one of the biggest bats in Delaware County, posting a .508 batting average and a .532 on-base percentage with 33 RBIs. Fourteen of her team-high 30 hits went for extra bases, including seven homers and seven doubles. The All-Central League honoree will continue her playing career at East Stroudsburg, where she will play alongside her sister, Morgan.

Sam Ciasullo, Springfield: The senior was a hitting and pitching star for the Cougars. A four-year varsity starter, Ciasullo had her best season yet, as her year-long dominance helped Springfield make a run to the District 1 Class 5A final and a trip to the second round of the state tournament. Ciasullo registered 17 wins and a 1.39 ERA, punched out 229 hitters and held the opposition to a .196 batting average. Ciasullo was a pure slugger at the plate, slashing .493/.561/.667 with 34 hits, including four doubles, a triple and a home run. She will play softball next spring at Holy Family. Springfield pitcher Sam Ciasullo winds up against Marple Newtown. Ciasullo retired nine of the last 10 batters she faced to close out a 2-1 win for the Cougars. (Pete Bannan/MediaNews Group)

Ava Franz, Chichester: The senior infielder had another spectacular season for the Eagles. An All-Delco in all three high school seasons (2018, 2019, 2021), Franz was one of the best high school softball players in the area ever since her freshman year. Although Chi struggled to win ballgames during her time with the program, Franz was consistently awesome. The Villanova recruit destroyed opposing pitching, batting a ridiculous .638 with six doubles, 14 home runs (far and away a Delco best) and 32 RBIs in her senior season. Franz struck out only twice in 59 plate appearances.

Morgan Mesaros, Garnet Valley: The sensational senior committed to James Madison before she played an inning of high school softball. Before she arrived at Garnet Valley, Mesaros was a highly recruited talent and verbally committed to James Madison during the eighth grade. After injury-riddled seasons as a freshman and sophomore, Mesaros played every game for the 2021 Jags and had one of the best offensive seasons in Delco. An all-league selection, she helped lead the Jaguars to the District 1 Class 6A quarterfinals, batting .518 with nine home runs and 37 RBIs. In addition, Mesaros smacked 10 doubles and legged out three triples, all while playing superb defense at shortstop.

Keri McCallum, Haverford: The junior was a force with the bat and defensively at the hot corner for the co-Central League champions and state finalists. Voted by teammates as Haverford’s unsung hero, McCallum came through with clutch hits during the Fords’ run to the PIAA Class 6A championship game. She belted a home run in a win over Hazleton and had a two-RBI game in the Fords’ upset win over previously undefeated Spring-Ford in the 6A quarterfinals. The All-Central League selection led the Fords in batting average (.516) and slugging percentage (.828) and tied for first in home runs (four). McCallum also had 22 RBIs and a team-leading eight doubles. Haley McMenamin, Ridley: One of the top underclassmen in Delco, the sophomore second baseman was a star for the co-Central League champions. A left-handed hitter with power and speed, McMenamin is the total package. She produced a .483 batting average and a .551 on-base percentage. The All-Central League selection racked up 28 hits, including a team-high five triples as well as three home runs. McMenamin finished with 20 RBIs and 27 runs scored for the Green Raiders, who advanced to the second round of the District 1 Class 6A tournament. McMenamin was also one of the top hitters on this year’s Delco Carpenter Cup team.

Brooke McKeown, Haverford: The senior centerfielder was the engine at the top of the order during the Fords’ historic 2021 campaign. The All-Central League honoree led the team in hits (41), runs (31), RBIs (26) and stolen bases (13). She posted a .451 batting average, a .485 on-base and a .692 slugging percentage. A tremendous defensive outfielder, McKeown had a .967 fielding percentage and committed only one error all season. It’s not a surprise that McKeown was voted Haverford’s co-offensive player of the year, sharing the award with senior shortstop Tess Smiley. McKeown will continue her career at East Stroudsburg.

Annie Bechtold, Garnet Valley: The senior slugger had an amazing season hitting in the middle of the lineup for the Jaguars. Half of Bechtold’s 30 hits went for extra bases: seven doubles, three triples and five homers. She finished with a .491 batting average. Bechtold delivered a clutch RBI in GV’s lone playoff win, a 4-3 decision over Perkiomen Valley in the first round of the District 1 Class 6A tournament. The All-Central League catcher’s productive campaign was a big reason for GV’s 16-win season. Bechtold’s brother, Andrew, is a member of the Minnesota Twins organization and former Garnet Valley baseball All-Delco. Annie will continue her career at East Stroudsburg.

Brianna Lawson, Sun Valley: The junior pitcher/shortstop was the driving force for a rebuilding program and one of the best players in the Ches-Mont League. Despite the Vanguards’ struggles this season, Lawson kept her team in most games with her solid pitching, thought it was at the plate where she made her biggest mark. An all-league selection, Lawson batted .593 with a .651 on-base percentage. In addition, she produced nine doubles, three triples and two home runs while producing 15 RBIs. Lawson is already committed to playing softball at Monmouth University.

Hailee Moran, Episcopal Academy: The senior was the ultimate utility player for the Churchwomen, who went 12-0 in the regular season. A two-time All-Delco, Moran played center field, shortstop and catcher. Said coach Kelly Edwards: “She can play anywhere. An amazing utility player. Natural leader on the field.” Moran was a three-time All-Inter-Ac League honoree. She slashed .523/.531/.864 with five doubles, two triples and two home runs. Moran collected 22 RBIs and 22 runs scored and stole 10 bases. Moran will continue her playing career at Dickinson College.